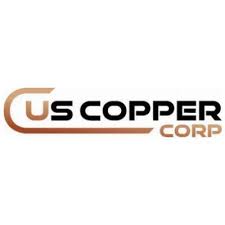 The objective for US Copper’s current drill program is to verify 50-year-old drill results (96 drill holes totaling 50,000 feet which will enable recalculation of the current resource (Tanaka, 2014) and the reclassification of most of the resource from inferred to indicated. With sufficient data a further objective would be to include silver and gold values in the resource. Ultimately, US Copper intends to include the updated Superior resource into a revised Moonlight PEA (TetraTech, 2018) which was based on only the nearby Moonlight Deposit. The historic drilling by Placer Amex was done on a 250 ft x 250 ft grid of vertical holes averaging <600 ft per dh. Little documentation and Quality Assurance/Quality Control (QAQC) protocols were retained limiting the resource classification to inferred. US Copper’s full program as previously announced will drill 10 – 12 vertical and angle holes (10,000 ft) inside the historic grid. Some holes will twin older holes while most will be interior to the grid pattern.

“The five holes reported here show excellent continuity of grade and correlate very well to the nearby historic holes, thereby validating Placer Amex drill results,” commented Stephen Dunn, US Copper’s President and CEO. “To date the program has successfully achieved its objectives including demonstrating that silver and gold will contribute to the project economics.”

Assay results from the other two completed drill holes are still pending and will be reported later. 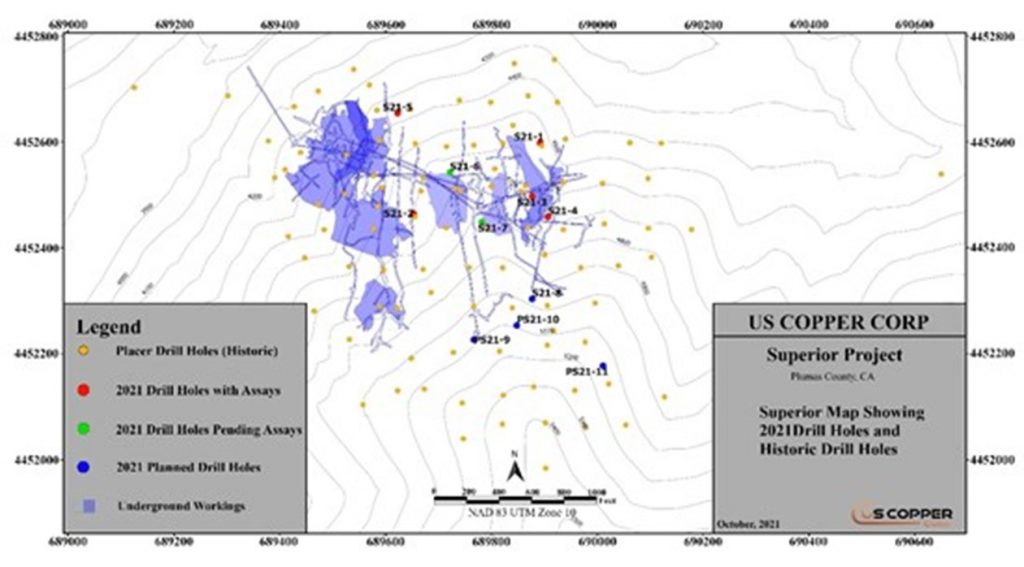 All seven completed holes were drilled entirely in the quartz monzonite of the mid-Jurassic Lights Creek Stock. Mineralization consists of high-grade chalcopyrite with minor bornite and other copper sulfides in tourmaline-magnetite veins and veinlets (21.9 ft of 1.1% Cu in S21-1; 15.6 ft of 1.27% Cu in S21-4). Lower-grade disseminated mineralization is widespread adjacent to and between the vein-veinlets. The average grade of the total footage (3,598 ft) from the five holes reported here is 0.2% copper, which exceeds the cutoff grade used in the Moonlight PEA (2018). No significant oxide copper occurs at Superior, and pyrite is minor.

The drill program at Superior and Engels was initially designed to be a seven-hole program to confirm historic Placer assays and test for gold/silver credits that had not been thoroughly measured previously. With a successful financing in the spring, USCU decided to expand the program to complete 10 – 12 holes at Superior (plus another three holes at Engels) for the purpose of upgrading the existing inferred resource (Tanaka, 2014) to the indicated category and then potentially rolling the Superior resource into an updated Moonlight PEA (TetraTech, 2018). The Dixie Fire over-ran the project area in September requiring the evacuation of employees, contractors, and the drill crew, prematurely terminating this season’s program.

Historical background on the Superior Deposit

Between 1915 and 1930, underground mining methods extracted approximately 4.7 million tons of ore producing 160 million lbs. of copper averaging 2.2% copper, plus silver and gold credits from the Superior and nearby Engels deposits. Most of the production came from Engels, with less than 1 million tons coming from several 5 – 20 ft wide moderately dipping structures at Superior. During the 1960’s Placer recognized lower grade, potentially open-pitable mineralization, between and surrounding these structures and drilled 96 vertical surface holes (totaling about 50,000 ft) on a 250 ft. square grid. They defined a resource which they estimated at of 72 million tons (“mt“) of 0.384% Cu using a 0.25% cutoff. US Copper (formerly Crown Mining Corp) released a new resource (Tanaka, 2014) estimating an Inferred resource of 60 mt containing 0.41% Cu with a 0.2% cutoff. The lack of complete documentation from Placer’s earlier work precluded an Indicated classification of the resource. Because of insufficient data neither of these resource estimates included silver or gold values.

US Copper personnel regularly observe procedures including the boxing of core at the drill site. Core is then securely delivered to the core logging and storage facility in Crescent Mills CA (~10 miles from the drill sites). The core is logged, magnetically scanned, and photographed. Periodic samples are collected for specific gravity testing and petrographic analysis. The core is then sawn in half. One half is bagged with appropriate documentation and securely transported to the ALS lab in Reno, NV. To ensure that proper QAQC accompanies the analyses appropriate QAQC elements are included in each batch of samples. The QAQC elements consist of certified standards, duplicate analyses and certified coarse blanks or blank material that has been documented to be barren for gold and base metals.

The scientific and technical content of this press release has been reviewed and approved by George Cole, M.Sc., Director of US Copper who is a “Qualified Person” as defined in National Instrument 43-101 Standards of Disclosure for Mineral Projects. George Cole is a Registered Professional Geologist through AIPG (CPG-11687).

About US Copper Corp

The Superior and Engels Mines operated from about 1915-1930 producing over 161 million pounds of copper from over 4 million tons of rock containing 2.2% copper with silver and gold credits.

The Moonlight Deposit was discovered and drilled by Placer Amex during the 1960’s. Details of the resources on US Copper’s property and the parameters used to calculate them can be found in the “Technical Report and Preliminary Economic Assessment for the Moonlight Deposit, Moonlight-Superior Copper Project, California, USA” dated April 12, 2018, on both the company’s website at www.uscoppercorp.com or on www.sedar.com under the US Copper Corp profile.