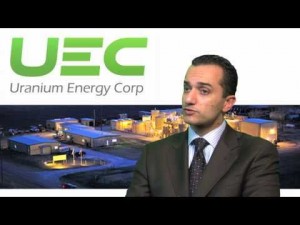 Uranium Energy Corp (NYSE:UEC) is pleased to announce that the Company has received the results of a Preliminary Economic Assessment, summarized in the technical report “Technical Report Preliminary Assessment Slick Rock Project Uranium/Vanadium Deposit, San Miguel County, Southwest Colorado, USA”, dated effective April 8, 2014 prepared in accordance with National Instrument 43-101 for the Slick Rock Project. The Company intends to file the PEA on SEDAR on or about April 24, 2014.

President and CEO Amir Adnani stated, “We are very pleased to reach this important milestone for the Slick Rock Project, which is just one of five conventional uranium properties we have in the Colorado Plateau. The PEA shows robust economics for the project which is capable of delivering meaningful uranium and vanadium production over a long mine life. Production in South Texas from our hub-and-spoke platform remains our top priority, however, the value of our extensive pipeline of growth projects should not be understated. This pipeline also includes advanced stage projects in Arizona and Paraguay that are inexpensive to maintain but can be monetized or developed further at higher uranium prices.  To this end, we have completed the majority of similar level studies on our large Anderson project in Arizona and expect to issue a new technical report in 90 days.”

The PEA was prepared for the Company by Douglas Beahm, PE, PG, of BRS Inc., with contributions by Bruce Davis, FAusIMM, of BD Resource Consulting, Inc. (BDRC) and Robert Sim, P. Geo, of Sim Geological Inc. (SIM).  The PEA is based on the current Inferred Mineral Resource estimate for uranium (BDRC and SIM, 2012), which was first disclosed in the technical report “Technical Report for the Slick Rock Project Uranium/Vanadium Deposit, San Miguel County, Southwest Colorado, USA”, effective December 2012, as described in the PEA available on SEDAR and summarized in the chart below.  The purpose of the PEA is to provide an independent analysis of the potential economic viability of the Inferred Mineral Resources of the Project. The technical staff of the Company assembled an extensive amount of information as part of the Company’s production planning for the Project. This data was verified and used by BRS as the basis of the PEA.

The uranium mineral resource estimate has been generated using drill hole sample assay results and the interpretation of a geologic model which relates to the spatial distribution of uranium. The vanadium mineral resource was estimated based on the estimated grades for uranium using a 6:1 V:U ratio. Interpolation characteristics have been defined based on the geology, drill hole spacing, and geostatistical analysis of the data.

At the time the majority of the uranium assays available for mineral resource estimation were collected, the common practice in mineral exploration and development was to rely on uranium values to estimate vanadium content based on the historic V:U ratios for each mine area. Uranium values were determined from chemical assays or, far more commonly, from radiometric equivalent determinations either with downhole geophysical logging (surface exploration) or handheld scintillometers (underground face mapping and mining). Vanadium values were estimated based on the V:U ratios experienced during past production in the area and confirmed by head assays at the mills.

Grade estimates have been made using ordinary kriging into a model with a nominal block size of 50 x 50 x 10 ft (L x W x H). Statistical evaluations result in the segregation of data according to favorable zone domains during grade interpolation. Bulk densities have been assigned to blocks in the model based on historic production data.

The results of the modeling process have been validated using a series of methods. The results indicate that the resource model is an appropriate estimation of global resources based on the underlying database.

The resources have been classified by their proximity to sample locations and are reported, as required by NI 43-101, according to the CIM Definition Standards on Mineral Resources and Mineral Reserves. Based on the current distribution of drilling, resources in the Inferred class occur within the designated favorable areas.  There are no known factors related to environmental, permitting, legal, title, taxation, socio-economic, marketing or political issues which could materially affect the Inferred Mineral Resource.

Information about data verification applicable to the Inferred Resource is available in the Technical Report for the Slick Rock Project Uranium/Vanadium Deposit, San Miguel County, Southwest Colorado, USA, effective December 2012, available on SEDAR, as well as in the PEA that will be filed on SEDAR and the Company website on or about April 24, 2014.

The Company has an in-depth understanding of the geology at the Project.  The Project has been the subject of study since the 1940’s and the subject of mine production through the early 1980’s.  The practices used during the various drilling campaigns have been conducted in a professional manner and have adhered to accepted industry standards.  Based upon the available drilling data, published geologic reports and mapping, the mineral resource estimation, and the PEA, the following conclusions have been made:

The PEA discussed in this press release is preliminary in nature, and it includes Inferred Mineral Resources that are considered too speculative geologically to have the economic considerations applied to them that would enable them to be categorized as mineral reserves.  There is no certainty that the Preliminary Economic Assessment will be realized.  Mineral Reserves are not estimated in the PEA.

The technical information in this news release has been prepared in accordance with the Canadian regulatory requirements set out in NI 43-101 and was reviewed by Clyde L. Yancey, P.G., Vice President-Exploration for the Company, a qualified person under NI 43-101.

Uranium Energy Corp is a U.S.-based uranium mining and exploration company.  The Company’s fully licensed Hobson processing facility is central to all of its projects in South Texas, including the operating Palangana in-situ recovery (ISR) mine, the permitted Goliad ISR project and the development-stage Burke Hollow ISR project.  Additionally, the Company controls a pipeline of advanced-stage projects in Arizona, Colorado and Paraguay.  The Company’s operations are managed by professionals with a recognized profile for excellence in their industry, a profile based on many decades of hands-on experience in the key facets of uranium exploration, development and mining.