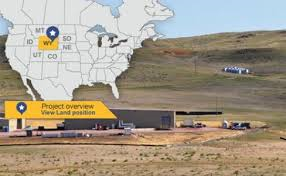 Uranerz Energy Corporation (NYSE MKT:URZ)  (TSX:URZ)  (FRANKFURT: U9E) is pleased to announce that it has delivered its first drums of uranium (as U3O8) produced from its wholly-owned Nichols Ranch ISR Uranium Project in the Powder River Basin of Wyoming, U.S.A. The shipment of approximately 36,000 pounds was received at ConverDyn’s Metropolis Works Facility, located in Metropolis, Illinois, for subsequent transfer to one of the Company’s utility customers.

Uranerz signed its first long-term uranium sales agreement in 2009 with Exelon Generation Company, LLC, and signed its second sales agreement with another major U.S. utility later that same year. This delivery will satisfy a portion of Uranerz’ existing long-term sales contracts and the Company expects to make its next shipment of uranium later this quarter.

“This shipment takes the Company one step closer to completing its first recorded sales transaction,” stated Glenn Catchpole, Uranerz Chief Executive Officer. “We look forward to reporting production and revenue figures in the next quarter.”

The Nichols Ranch production facility is the newest uranium mine in North America. Commissioning of the Nichols Ranch ISR Uranium Project began on April 15, 2014 with the start of chemical addition to the circulating groundwater. The in-situ recovery process utilizes oxidized groundwater, fortified with baking soda, which is distributed through the underground uranium deposit by means of injection wells. The uranium-bearing water is recovered using production wells. Uranium is loaded on ion exchange resin at Nichols Ranch, and the resin is then transported to Cameco Resources’ Smith Ranch uranium production facilities for final processing into dried and drummed uranium concentrates. As the operations at Nichols Ranch have begun to transition from commissioning to commercial production, we are continuing to observe the expected improvements in the uranium recovery parameters.


Uranerz Energy Corporation is a U.S.-domiciled uranium company. The Company’s Nichols Ranch unit is its first ISR uranium mine. Uranerz controls a large strategic land position in the central Powder River Basin. The Company’s management team has specialized expertise in the ISR uranium mining method and a record of licensing, constructing and operating ISR uranium projects. The Company has entered into three long-term uranium sales contracts with Exelon and one other large nuclear utility for a portion of its planned production.