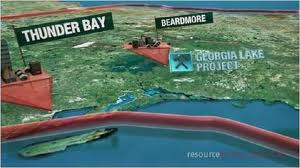 Ultra Lithium Inc. (TSX-V:ULI) (FRANKFURT:QFB) is pleased to announce that it has entered into a Letter of Intent with Rock Tech Lithium Inc. pursuant to which Ultra Lithium has been granted the sole and exclusive right to purchase a 100% interest in Rock Tech’s Georgia Lake lithium project in Ontario.

The Project has been explored for lithium bearing spodumene pegmatites since they were discovered in the 1950’s. According to historical records, work includes 40,000 metres of drilling over 335 holes testing the pegmatites, as well as line cutting, mapping, geophysics and geochemical analyses. A historical resource (non-NI 43-101 compliant) was estimated at 8.9 million tonnes with a weighted average grade of 1.19% lithium oxide. The resource estimate reported by Rock Tech in August 2012 has tested historical resource area of 4.9 million tonnes with a weighted average grade of 1.04% Li2O, and through additional drilling and channel sampling increased it to 3.19 million tonnes at 1.10% Li2O indicated resource and 6.31 million tonnes inferred resource at 1.00% Li2O. The remainder of the untested historical estimate is approximately 4 million tonnes grading 1.32% Li2O. In 1956, a vertical shaft was sunk on one pegmatite, the Nama Creek Main Zone North pegmatite, to a recorded depth of 500 feet.(2)

In October 2011, SGS Canada Inc. completed a metallurgical study on the Project’s lithium bearing pegmatite bulk samples. Metallurgical testing indicated that the spodumene material can be concentrated to a marketable 6.2% lithium oxide with recovery rate of 75.5% through heavy liquid separation and 81.1% by flotation. Additionally, lithium carbonate with 99.987% purity has been produced from these pegmatites, exceeding EV battery-grade specifications.

The Project has been supported by the local communities evidenced by Rock Tech’s joint memorandum of understanding with three First Nations, Bingwi Neyaashi Anishinaabek, Biinjitiwaabik Zaaging Anishinaabek, and Animbiigoo Zaagi’igan Anishinaabek. The MOU provides a framework for future negotiations around an Impact and Benefits Agreement while ensuring that development of the Project is conducted in a manner that provides mutual benefits to all parties.

The Project is located approximately 145 kilometers northeast of the city of Thunder Bay. The principal means of access to the area is Highway No. 11, with gravel and tertiary bush roads providing access to the claim groups. These mineral claims and mining leases are located in four different blocks of the Property.

Marc Morin, CEO of Ultra, stated that, “Ultra Lithium is very pleased with this potential acquisition. The project does not only have a NI 43-101 compliant resource in an area where the lithium pegmatites are open at depth and along strike but also has several other lithium pegmatite dykes representing future exploration targets. These pegmatites have demonstrated excellent metallurgical results exceeding EV battery grade specifications. The Project enjoys good infrastructure support and its location which is within 150 kilometres from a world class deep water port gives it an advantage. The Company believes that with the continued support of the First Nations groups and local community, it has the ability to move the Project forward with the backing of its Asian investment partners.”

This transaction is subject to a number of conditions, including but not limited to the approval of TSX Venture Exchange.