Tudor Gold Corp. (TSX-V: TUD) (FSE: TUC) is pleased to report on an additional 17 holes from its 27-hole, 2017 drill program on the Copper Belle zone of the Company’s Treaty Creek property in north-western B.C.

The summary of results provided in the table below, include the most promising gold intersections reported to date. Hole CB-17-26, returned 149.1m grading 1.78 g/t gold (from 97.8 to 246.9m), including a 59.2m interval of 2.84 g/t gold (from 97.8 to 157m depth). So far, 15 of the 16 holes drilled in the Copper Belle zone contain prominent mineralization, which continues to expand the size of this potential deposit and increases the area of the resource estimate for this zone.

*True widths of the mineralization have not been determined.

Walter Storm, President and CEO, stated: “The outstanding interval of gold mineralization in Hole CB-17-26–149m of 1.78 g/t gold–contains the highest average gold grade yet recorded for porphyry style mineralization on the Treaty Creek property. It also ranks among the top tier, in terms of gold grades, of the hundreds of holes drilled during the past fifteen years into multiple porphyry targets on the adjoining KSM and Brucejack-Snowfield properties of Seabridge Gold and Pretium Resources, part of the same, large hydrothermal “Sulphurets” system. The fact that we have achieved these kinds of grades in only our second year after acquiring Treaty Creek speaks both to the potential of the property and also the expertise of our geological staff. This hole will serve to further guide our exploration at Copper Belle in 2018, as well as the more than 3km of ground yet to be explored between the Copper Belle and the Iron Cap Zone of Seabridge Gold to the south, an area defined by extensive magnetotelluric anomalies.”

The Copper Belle 2017 resource delineation drill program comprised 27 holes to depths below 700m (an estimated 13,722m) and step-outs of 50m where topography permitted. Results from additional drill holes of the 2017 drill program at Copper Belle are still pending. Drill holes were targeted oblique to the northwesterly plunge of the main mineralized zone. A block of delineated mineralization will form the basis for a preliminary resource estimate. All drill holes were down hole surveyed at 25m stations using a Reflex Multi-shot device.

The Company’s 2016 Magnetotelluric Geophysical Survey program (MT Survey) was effectively utilized as a guide for the drill program. The MT Survey suggests that the mineralization continues to the southwest, toward the Iron Cap deposit of Seabridge Gold Inc. The MT Survey also suggests that the mineralized zone continues in all directions. Tudor Gold’s 2017 drill program was located five kilometers north of the Iron Cap deposit and the Company intends to step out to the south in its 2018 program to see if it can determine a relationship between the two areas.

Drill hole samples were assayed by Activation Laboratories Ltd. in Kamloops, BC. Analytical accuracy and precision are monitored by the submission of blanks, certified standards and duplicate samples inserted at regular intervals into the sample stream by Tudor Gold personnel. Activation Laboratories quality system complies with the requirements for the International Standards ISO 17025: 2005.

The Qualified Person for the Treaty Creek results in this new release is James McCrea, P.Geo. for the purposes of National Instrument 43-101. He has read and approved the scientific and technical information that forms the basis for the disclosure contained in this news release.

Tudor Gold is also pleased to announce that it has engaged AviTerra Consulting Inc. on a contract to develop and implement, marketing and communications programs focused on investor and market awareness.  The contract is for two years at a cost of five thousand dollars per month.  Incentive options to purchase 200,000 shares at $0.55 good for five years will also be granted to AviTerra.   These options will vest in 100,000 increments at the end of four consecutive three-month periods, in accordance with TSX-V policies.  The principals of AviTerra have more than thirty years of business management, marketing and media experience with private and public Canadian companies.  The investor relations contract is subject to TSX Venture Exchange approval. 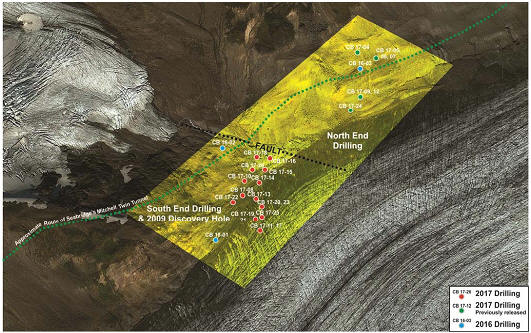 Tudor Gold is a precious and base metals explorer in British Columbia’s Golden Triangle, an area which hosts multiple past-producing mines and several large deposits that are approaching potential development. The Company has a 60% interest in both the Electrum and Treaty Creek properties, and a 100% interest in the Mackie, Eskay North, Orion, Fairweather, Delta and the High North properties, all of which are located in the Golden Triangle area.