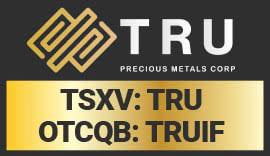 The drill program also confirmed the northwest trend of the mineralization, directly associated with a shear zone outlined by geophysics as a prominent detailed magnetic low that is continuous for at least 600m. The 600m detailed magnetic low is part of a regional structural break that has been outlined for approximately 7 kilometres by airborne magnetics on Twilite Gold. Regional till geochemistry has previously indicated a gold plus multi-element NNW anomalous trend coincident with the structural break. Only 200m of the shear zone at Twilite Gold has been tested by drilling to date, with results pending for 10 additional diamond drill holes.

Barry Greene, VP of Property Development and Director of TRU, commented: “We are delighted to see the continuity and expansion of the northwest trending Fort Knox Gold Zone successfully intersected in drill holes TL-21-16 and TL-21-17, and that the zone is wide open for potential further expansion. Since there has never been any drilling completed to the northwest beyond these holes, it becomes an obvious target area for a next phase of drilling. With thick sections of altered quartz breccia encountered in other nearby holes, for which assays are pending, we are hopeful for expansion of the gold zone to the southeast as well.” 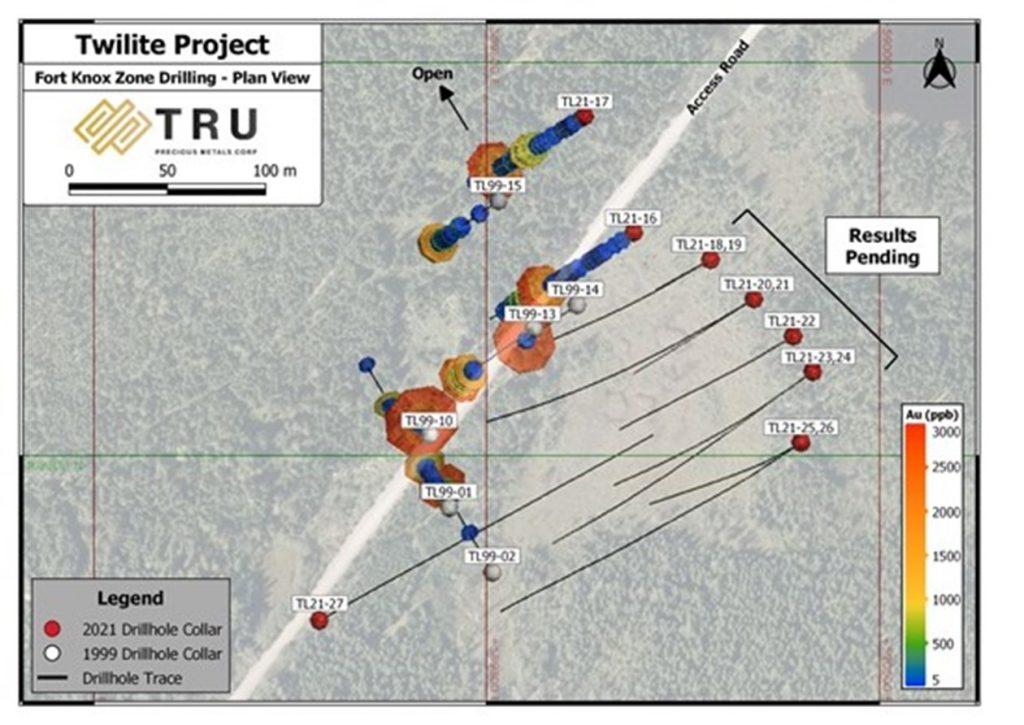 In hole TL-21-16, the uppermost gold mineralized zone is hosted by strongly bleached and iron carbonate altered mafic volcanics containing pyrite and arsenopyrite. The main gold zone is hosted by dark grey to black silicified breccia and continues across a sheared contact with graphitic sediments. 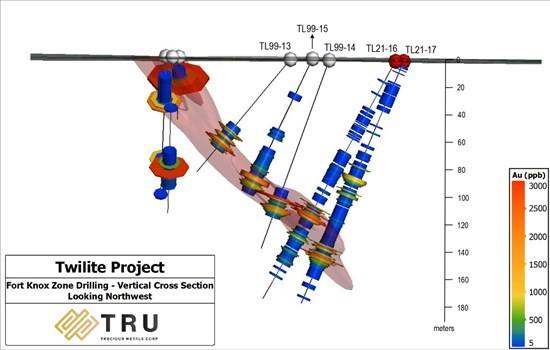 TRU Co-Founder and CEO Joel Freudman added: “We are pleased to share the initial results from our first drill program at Twilite Gold, which is also our first as a company. We are encouraged by the results from these first two holes. Our work at Twilite Gold will help us solidify the known mineralization areas and identify the project’s expansion potential. With the drill program completed, our focus for Twilite Gold will be on analyzing the data we have accumulated as we receive the remaining assays from the other ten holes.”

Separately, further to its July 30, 2021 press release, the Company is also providing an update on the final exploration results from its Gander West Property, located approximately 16 kilometres from New Found Gold Corp.’s Queensway Project. As previously announced, all rock sample and soil geochemical results were already received, but TRU has now received the results of the nine outstanding Gander West till samples submitted to Overburden Drilling Management Limited.

TRU is pleased to report that ODM’s gold grain analysis indicates visible gold grains in all nine of these samples. Pristine gold grains were recovered in seven samples, including 17, 12 and 11 pristine grains, respectively, in three of the samples. ODM has confirmed to the Company that this could be indicative of Gander West being fertile for gold exploration. The till samples had been collected around a large northeast elongated pond that was the site of a topographic lineament also indicated in the regional magnetic data as a potential fault structure. A more systematic program of till sampling is warranted to further delineate the potential head of the gold dispersal train, towards identifying a bedrock source.

All NQ core is sampled, cut by core saw, and split by Company personnel, and put into bags with unique sample tags for identification. The bags are sealed with a security tag and are then transported directly to the lab by TRU staff. All rock samples are analyzed at Eastern Analytical Ltd. (“Eastern Analytical”) of 403 Little Bay Road, Springdale, NL, a commercial laboratory that is ISO/IEC 17025 accredited and independent of TRU. Eastern Analytical pulverized 1000 grams of each sample to 95% < 89 μm. Samples are analyzed using fire assay (30g) with AA finish and an ICP-34, four acid digestion followed by ICP-OES analysis. All samples with visible gold or assaying above 1.00 g/t Au are further assayed using metallic screen to mitigate the presence of the nugget effect of coarse gold. Standards and blanks are inserted at defined intervals for QA/QC purposes by the Company as well as Eastern Analytical. The TRU exploration program design is consistent with industry best practices and the program is carried out by qualified persons employing a QA/QC program consistent with National Instrument 43-101.

Barry Greene, P.Geo. (NL) is a qualified person as defined by National Instrument 43-101 and has reviewed and approved the contents and technical disclosures in this press release. Mr. Greene is a director and officer of the Company and owns securities of the Company.

TRU has assembled a portfolio of gold exploration properties in the highly prospective Central Newfoundland Gold Belt. The Company has an option with a subsidiary of TSX-listed Altius Minerals Corporation to purchase 100% of the Golden Rose Project, located along the deposit-bearing Cape Ray – Valentine Lake Shear Zone. TRU also owns 100% of the Twilite Gold Project, located along the same Shear Zone, and 3 early-stage properties including 2 near New Found Gold Corp.’s high-grade Queensway Project. TRU’s common shares trade on the TSX Venture Exchange, on the OTCQB Venture Market, and on the Frankfurt exchange.