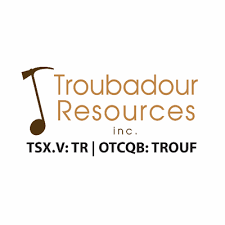 “The consistent gold values obtained from the altered granodiorite is the most significant surprise result from this drilling campaign and considerably changes the scope of the project. This discovery increases the potential size and mineral potential of the targets and Property as a whole. Although we did not replicate the bonanza-grade surface results previously reported, in part due to the structural complexity of the Doorn and Cabin targets, we were able to intersect several new polymetallic veins containing considerable gold values that only add to the project’s potential,” states Geoff Schellenberg, Company President.

The Phase 1 drill program focused on near surface targets associated with the historical high-grade occurrences at the Cabin and Doorn targets. These targets are more structurally complex than originally thought and the oriented core and structural data captured by Troubadour’s geological team during Phase 1 drilling will greatly aid in unlocking this complexity in future drilling. Anomalous gold and silver values were seen throughout the majority of drill holes in this phase, and mineralization remains open. Gold grades are not only hosted in polymetallic epithermal-style veins, but also within brecciated contacts between andesite and granodiorite as well as associated veining at contacts, altered vein halos, and structure/deformation zones. All of these areas occur within magnetic lows and will be the primary focus of exploration moving forward.

The Doorn and Cabin polyphase quartz-carbonate veins and breccia system contains medium to coarse grained blebs of pyrite, chalcopyrite and galena in wide sericite-chlorite-hematite + silica alteration halos. These alteration halos tend to host anomalous gold and silver, in addition to fault-related alteration zones and brecciated granodiorite/andesite contacts. Mineralized quartz-carbonate veins and veinlets are seen in both altered granodiorite and andesites, as well as at their contacts.

The veins encountered in drill hole TX21-023, which was drilled at an azimuth of 290° and a dip of -45°, returned 8.79 g/t Au over 0.8 m from 18.3 m to 19.1 m and 5.34 g/t Au over 0.35 m from 23.15 m. These shallow veins are believed to be trending N-S and remain untested to the south of Cabin, where a series of historic workings continue, and to the north beyond the limits of current geochemical and geophysical. The Company continues to work to expand data coverage in this area in preparation for Phase 2 drilling. The veins intersected in drill holes TX21-018 and TX21-023 are thought to be independent of those developed in the historical adits and workings at Cabin.

All drill core was geologically logged to identify zones of mineralization which were identified by unique sample numbers. Core was split in ½ with a purpose-built diamond blade rock saw. Half the sample was placed into a plastic bag while the other half remains in the core tray and is stored in a secure location. Samples were dispatched in rice bags and delivered in person by company representatives to MSA Labs directly in Langley, B.C. MSA Labs is an ISO/IEC 17025:2017 certified analytical lab in North American accredited by the Standards Council of Canada for material testing.

All core samples and coarse blank material were prepared using MSA labs PRP-915. This includes drying, crushing with 70% passing -2 mm. A 500 g aliquot is split from the -2 mm crush and further pulverized with 85% passing 75 μm. Analysis for gold is by 30 g Fire Assay (FAS-111) with an AAS finish. Any samples over 10 g/t Au were re-assayed by gravimetric finish (FAS-415). A 30-element Inductively Coupled Plasma Emission Spectroscopy (ICP-ES) method was also used for each core sample to test for Ag, Pb, Zn and Cu (ICP-130).

Patrick McLaughlin, P. Geo., a Qualified Person as defined by NI 43-101, has verified the exploration data disclosed, including sampling, analytical and test data contained in the written disclosure, and has reviewed and approved the contents of this news release.

About the Texas Project

The road accessible Texas property covers historical mineral showings and is located 3 km southwest of the town of Beaverdell and in close proximity to the past producing Beaverdell Mine1 that was in operation from 1896 to 1991. The property covers ground prospective for vein hosted and bulk tonnage precious metal deposits, based on at least seven historical and newly discovered gold occurrences on the property and geological comparisons with the nearby Beaverdell Mine1. Several showings are present on the property, including two old mines and many older trenches, pits and adits that expose mineralized veins. The Beaverdell mining camp is predominately known for its silver production and the presence of high-grade gold occurrences makes the Texas property unique and significantly more attractive.

TROUBADOUR RESOURCES INC. is a public Canadian mining exploration company focused on copper and gold in British Columbia, Canada. The Company is managed by an experienced team consisting of youthful and seasoned professionals with proven track records as mine finders. The newly acquired Texas gold property diversifies the Company’s commodity focus and compliments Troubadour’s Amarillo copper project located 10 km south of the past-producing Brenda Mine in southern BC and 35 km east of Kodiak Copper’s MPD discovery.