Troilus Gold Corp. (TSX: TLG) (OTCQX: CHXMF) reports additional assay results from the Southwest Zone as part of its ongoing expansion and definition drilling program at its 100%-owned Troilus deposit, located in northcentral Quebec, Canada. The latest results have expanded the ore body to the southwest, well beyond the pit shell proposed in the Preliminary Economic Assessment published in August 2020. The Southwest Zone is located ~2.5 kilometres southwest of the former mine and main mineral zones (Z87, Z87 South and J Zone) and has become one of the most important mineral growth targets on the Troilus property since it was initially discovered and drilled in late 2019. Drill hole locations are provided in Figures 1 and 2, and results in Table 1.

Justin Reid, President, CEO and Director of Troilus Gold, stated, “These new results are very exciting as they confirm our exploration team’s latest geological modelling suggesting mineral continuity well beyond the southern extent of this zone, replacing a previous “narrow hinge” model in which it was thought to taper off. The ongoing drilling from late 2020 and throughout 2021 has resulted in major technical advancements that continue to unfold. We believe that the impact of the ongoing definition of shallow and above average grade mineralization in the Southwest Zone is too important not to be considered in the upcoming studies and overall mine plan; the original Q4 2021 timing of the resource estimate would have prevented us from considering these important results. As we continue to define the extent of the Troilus deposit, our outlook on the scale and robustness of the project has never been more positive.”

The Southwest Zone is located 2.5 kilometres southwest of Z87, the former mine’s main production pit, and lies along the margin of the Troilus Diorite and surrounding volcanics. Initial prospecting and mapping started in 2018 to follow-up on some sparse and shallow drilling completed by Inmet Mining Corporation from 1986 to 2000, which returned intercepts as high as 1.23 g/t gold over 36 metres and 1.06 g/t gold over 18 metres. Since drilling began in November 2019, Troilus’ exploration team has successfully delineated a homogeneous body of mineralization that is geologically similar to the main zone Z87, extending over a strike length of 1.85 kilometres and up to 420 metres in width.

While the primary lithology and poly-phase alteration and depositional event that likely emplaced the mineralization at Southwest Zone appears to be the same as what has been observed in the Z87 open pit, which produced over one million ounces of gold and copper bearing ore, the intensity of the alteration is stronger. The zone appears darker, intense amphibolite level metamorphism, and carries significantly more magnetite, as well as a trend of increasing amounts of base metals.

The July 2020 mineral resource estimate included 8,500 metres of drilling from the Southwest Zone, which
contributed 583,000 oz of Inferred resources (22.6 Mt @ 0.80 g/t AuEq) to the total mineral resources of 4.96 Moz AuEq in the Indicated category (177.3Mt @ 0.87 g/t) and 3.15 Moz AuEq in the Inferred category (116.7Mt @ 0.84 g/t) (see press release dated July 28, 2020). Since the 2020 mineral resource cut-off, over 40,000 metres have been drilled in the Southwest Zone, which has to date more than doubled the strike length of mineralization from 850 metres to 1.85km. As evidenced by today’s results, the Southwest zone still remains open in all directions and the next few months of drilling will aim to continue defining the extent of the mineral envelope. 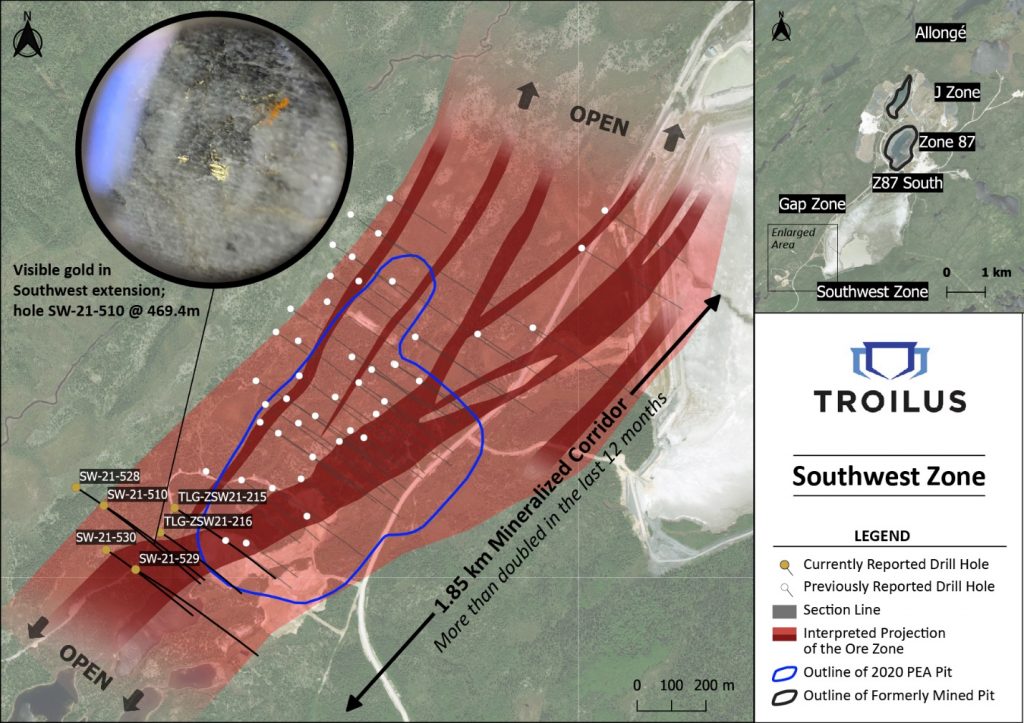 During the Southwest Zone drill program in 2021, one metre assay samples were taken from NQ core and sawed in half. One-half was sent for assaying at ALS Laboratory, a certified commercial laboratory, and the other half was retained for results, cross checks, and future reference. A strict QA/QC program was applied to all samples; which included insertion of one certified mineralized standard and one blank sample in each batch of 25 samples. Every sample was processed with standard crushing to 85% passing 75 microns on 500 g splits. Samples were assayed by one-AT (30 g) fire assay with an AA finish and if results were higher than 3.5 g/t Au, assays were redone with a gravimetric finish. For QA/QC samples, a 50 g fire assay was done. In addition to gold, ALS laboratory carried out multi-element analysis for ME-ICP61 analysis of 33 elements four acid ICP-AES.

The technical and scientific information in this press release has been reviewed and approved by Kyle Frank, P.Geo., Senior Geologist, who is a Qualified Person as defined by NI 43-101. Mr. Frank is an employee of Troilus and is not independent of the Company under NI 43-101.

The updated mineral resource estimate disclosed in this press release was prepared by Mr. Paul Daigle, géo., Senior Associate Resource Geologist with AGP Mining Consultants Inc.. The supporting Technical Report is available on SEDAR (www.sedar.com) under the Company’s issuer profile, as well as on its website www.troilusgold.com.

Troilus Gold Corp. is a Canadian-based junior mining company focused on the systematic advancement and de-risking of the former gold and copper Troilus Mine towards production. From 1996 to 2010, the Troilus Mine produced +2 million ounces of gold and nearly 70,000 tonnes of copper. Troilus is located in the top-rated mining jurisdiction of Quebec, Canada, where is holds a strategic land position of 1,420 km² in the Frôtet-Evans Greenstone Belt. Since acquiring the project in 2017, ongoing exploration success has demonstrated the tremendous scale potential of the gold system on the property with significant mineral resource growth. The Company is advancing engineering studies following the completion of a robust PEA in 2020, which demonstrated the potential for the Troilus project to become a top-ranked gold and copper producing asset in Canada. Led by an experienced team with a track-record of successful mine development, Troilus is positioned to become a cornerstone project in North America.