Troilus Gold Corp. (TSX: TLG) (OTCQX: CHXMF) reports additional assay results from the Southwest Zone at its Troilus Project, located in northcentral Quebec, Canada. The Southwest Zone is located ~2.5 kilometres from the formerly mined open pits. It was initially discovered and drilled in late 2019 and has quickly evolved into the most significant growth target on its property. The intercepts reported today are largely located outside of the pit shell modelled in the Preliminary Economic Assessment (see press release dated August 31, 2020). The results are a combination of infill drill holes, focused on increasing drill density and upgrading the resource category from Inferred to Indicated, as well as exploration drill holes, which have confirmed mineral continuity to the southwest, identifying a down-dip extension of mineralization to the west, 300 metres below PEA pit shell. The location of the drill hole collars and traces are presented in figures 1 and 2, while results can be found in Table 1.

All the results reported today will be included in the mineral resource update and Pre-Feasibility Study, expected in mid-2022. As announced on April 21, 2022, Troilus reached the cut-off for drilling to be included in these studies in March in light of its targeted timeline.

Justin Reid, CEO of Troilus Gold, commented, “We’re continuing to see impressive results coming out of the Southwest Zone, which is encouraging given that this zone is expected to be the focus in the early years of production. Over the last 8 months, our primary focus has been to further define and upgrade the resource of the Southwest Zone for the ongoing Pre-Feasibility Study, set to be delivered mid-year. Already we’ve been able to more than double the footprint of the Southwest Zone, with high potential for further growth remaining. Since its discovery in late 2019, the Southwest Zone has become an extremely valuable component of the Troilus deposit – as we begin drilling our 11,000m Gap Zone program, we’re eager to uncover the potential of yet another piece of the Troilus system.” 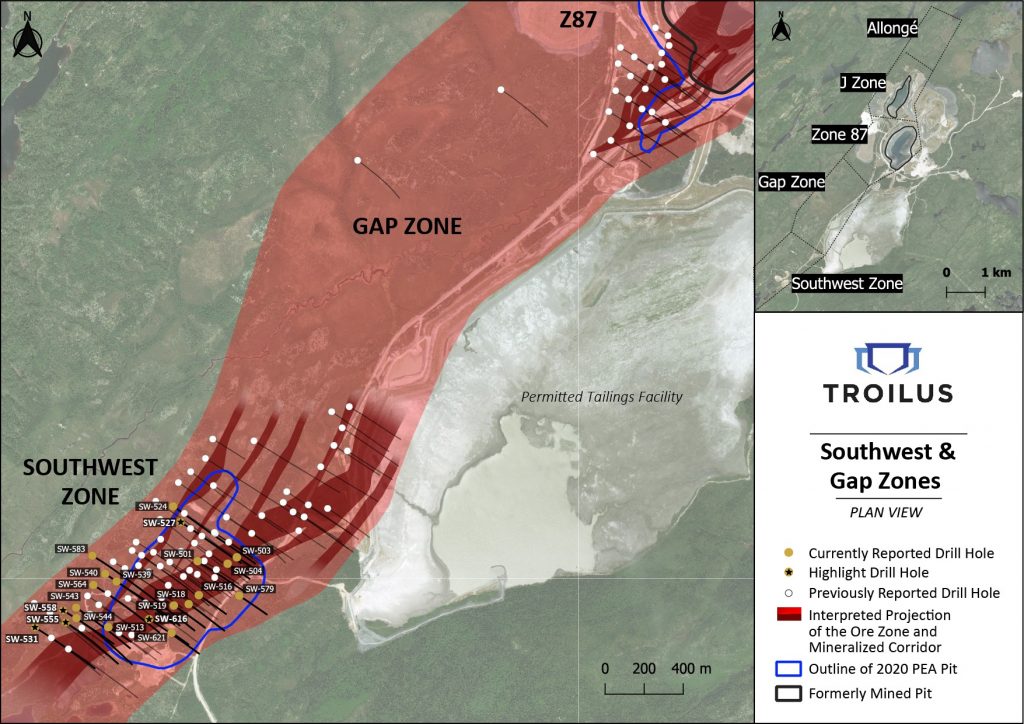 During the Southwest Zone drill program, one metre assay samples were taken from NQ core and sawed in half. One-half was sent for assaying at ALS Laboratory, a certified commercial laboratory, and the other half was retained for results, cross checks, and future reference. A strict QA/QC program was applied to all samples; which included insertion of one certified mineralized standard and one blank sample in each batch of 25 samples. Every sample was processed with standard crushing to 85% passing 75 microns on 500 g splits. Samples were assayed by one-AT (30 g) fire assay with an AA finish and if results were higher than 3.5 g/t Au, assays were redone with a gravimetric finish. For QA/QC samples, a 50 g fire assay was done. In addition to gold, ALS laboratory carried out multi-element analysis for ME-ICP61 analysis of 33 elements four acid ICP-AES.

The technical and scientific information in this press release has been reviewed and approved by Kyle Frank, P.Geo., Manager of Exploration, who is a Qualified Person as defined by NI 43-101. Mr. Frank is an employee of Troilus and is not independent of the Company under NI 43-101.

Troilus Gold Corp. is a Canadian-based junior mining company focused on the systematic advancement and de-risking of the former gold and copper Troilus Mine towards production. From 1996 to 2010, the Troilus Mine produced +2 million ounces of gold and nearly 70,000 tonnes of copper. Troilus is located in the top-rated mining jurisdiction of Quebec, Canada, where is holds a strategic land position of 1,420 km² in the Frôtet-Evans Greenstone Belt. Since acquiring the project in 2017, ongoing exploration success has demonstrated the tremendous scale potential of the gold system on the property with significant mineral resource growth. The Company is advancing engineering studies following the completion of a robust PEA in 2020, which demonstrated the potential for the Troilus project to become a top-ranked gold and copper producing asset in Canada. Led by an experienced team with a track-record of successful mine development, Troilus is positioned to become a cornerstone project in North America.