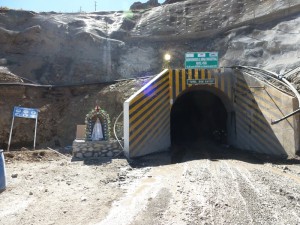 Trevali Mining Corporation (TSX:TV)(TSX:TV.WT)(OTCQX:TREVF)(LMA:TV)(FRANKFURT:4TI) wishes to announce that it has commenced zinc and lead-silver concentrate production from the metallurgical plant at the Santander Mine in Peru.

The Crushing, Transfer, Grinding (all four mills), Flotation and Tailings circuits are all operational and undergoing commissioning and optimization.

As part of the commissioning process the mill is currently processing stock-piled mineralized feed during day-shift and fine tuning the plant and optimizing the reagent schemes and run criteria following each run during the subsequent night-shift as required.

“Commencing metal concentrate production from our Santander Mine is a major achievement for Trevali. We now aim to ramp-up operations to the planned 2,000-tonne-per-day throughput,” stated Dr. Mark Cruise, Trevali’s President and CEO. “This milestone is a testament to the hard work and dedication of the Trevali – Glencore construction teams as well as our contract partners that continue to play a vital role in our success.”

Trevali is a zinc-focused base metals mining company with operations in Canada and Peru.

In Peru, the Company has commenced commissioning and concentrate production at its Santander zinc-lead-silver mine and metallurgical plant with planned subsequent ramp up to 2,000-tonnes-per-day production.

In Canada, Trevali owns the Caribou mine and mill, Halfmile mine and Stratmat polymetallic deposit all located in the Bathurst Mining Camp of northern New Brunswick. Initial trial production from the Halfmile underground mine was successfully undertaken in 2012 and the Company anticipates commencing operations at its 3,000-tonne-per-day Caribou Mill Complex in 2014.

All of the Company’s deposits remain open for expansion.