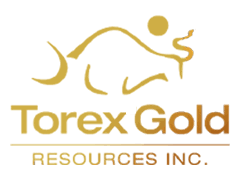 Torex Gold Resources Inc. (TSX:TXG) is pleased to announce that it has closed its previously announced offering of common shares of the Company with a syndicate of underwriters led by BMO Capital Markets. An aggregate of 4,895,000 Common Shares were issued by the Company at a price per Common Share of C$12.60, including 525,000 Common Shares issued on the partial exercise of the over-allotment option, for aggregate gross proceeds of C$61,677,000.

The net proceeds of the Offering will be used to fund and provide liquidity for its working capital obligations during the re-start and ramp-up of the ELG Mine Complex, as required, and for general corporate purposes.

The Common Shares issued pursuant to the Offering have not been and will not be registered under the US Securities Act of 1933, as amended (the “U.S. Securities Act”) or any state securities laws, and accordingly may not be offered or sold within the United States except in transactions exempt from the registration requirements of the U.S. Securities Act and applicable state securities laws. This press release does not constitute an offer to sell, or the solicitation of an offer to buy the Common Shares, nor will there be any sale of the Common Shares in any jurisdiction in which such offer, solicitation or sale would be unlawful.

The processing plant continues to process between 10,000 – 13,000 tonnes per day.  Recoveries have been approximately 85%, and grades have been close to 3 grams per tonne.  Ore is being processed from all three open pits, El Limon, Guajes, and El Limon Sur.  Additional employees are being called back to work, with the full complement expected back by the end of February.  SART plant construction is ramping up and the plant is expected to be fully operational by mid-year.  The full complement of contractor employees for the Sub-Sill is expected to be on-site by the end of March.  Cash reserves, prior to the close of the Offering, were US$64 million including US$14 million set aside for reclamation obligations.

Torex is an emerging intermediate gold producer based in Canada, engaged in the exploration, development and operation of its 100% owned Morelos Gold Property, an area of 29,000 hectares in the highly prospective Guerrero Gold Belt located 180 kilometers southwest of Mexico City. Within this property, Torex has the El Limón Guajes Mine, which announced commercial production in March of 2016, the Sub-Sill Project, currently under development, and the Media Luna Project, an early stage development project for which the Company issued a preliminary economic assessment (PEA) in 2015. The property remains 75% unexplored.