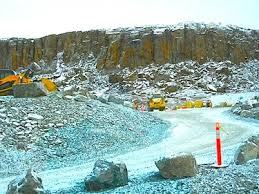 TMAC Resources Inc. is pleased to announce the successful completion of a private placement consisting of 43,943,700 common shares at a price of $1.75 and 434,000 Common Shares issued on a flow-through basis at a price of $2.00 for aggregate gross proceeds of $77,769,475. The Offering was made through a syndicate of investment dealers co-led by CIBC World Markets Inc. and BMO Capital Markets, and included Scotia Capital Inc. and Primary Capital Inc. A total of $65 million of the Offering was placed with Resource Capital Fund VI L.P.

The net proceeds of the Offering will be used by TMAC at its 100% owned Hope Bay Gold Project located approximately 685 kilometres northeast of Yellowknife in the Kitikmeot region of Nunavut, Canada, to fund its 2014 program including exploration, engineering, environmental permitting and compliance, a pre-feasibility study and for working capital and general corporate purposes. Coincident with the closing of the financing, the Company repaid the $15 million dollar convertible loan plus interest owed to Newmont Mining Corporation, which was scheduled to mature on December 31, 2014.

Terry MacGibbon, TMAC’s Executive Chairman stated, “This financing clearly demonstrates the strong endorsement by investors of the quality of Hope Bay and the strength of the Company’s management team and its operating philosophy. We are very pleased that TMAC, a private exploration and mine development focused company, has been able to raise over $110 million of equity since being incorporated and acquiring Hope Bay in March 2013. We are also very pleased to welcome Resource Capital Fund, along with Newmont and the Inuit of Nunavut, as partners in the further development of Hope Bay.” He added, “This financing, along with our current funds, after the loan repayment, leaves approximately $72 million in the Company’s treasury. Pending 2014 results, the Company plans to conduct a pre-feasibility study by early 2015, which, when completed, will allow the Company to consider equity and debt project financing options.”

Catharine Farrow, TMAC’s Chief Executive Officer stated, “With new funds on hand, no debt, and the support of two strong, strategic shareholders in Newmont and Resource Capital Fund, the Company looks forward with great confidence to realizing its goal of developing Canada’s next gold district at Hope Bay. Since acquiring the property in March 2013, the Kitikmeot Inuit Association and TMAC have worked together to establish a mutually beneficial relationship on which to advance Hope Bay in the best interest of all stakeholders. We are very fortunate in having regulatory approvals in place that allow us to put Doris North into production and other permits that allow underground advanced exploration including bulk sampling at Boston and surface exploration drilling at Doris, Madrid and Boston.” She added, “This financing will provide the Company with the opportunity to significantly de-risk the Hope Bay by carrying out an extensive surface drill programme designed to upgrade mineral resource classifications, add to the global gold resource, re-open the existing Doris underground infrastructure, advance engineering and planning for the mine environments and the processing plant, advance the environmental permitting process for Madrid and Hope Bay as a whole, and conduct a pre-feasibility study. We look forward to continuing to work with our Inuit partners, strategic shareholders and all other stakeholders to make the development of Hope Bay a great success.”

TMAC is a privately held mineral exploration and development focused company with an experienced and accomplished board of directors and a strong senior management team, which includes a number of former senior executives of FNX Mining Company Inc. and headed by Terry MacGibbon, founder of FNX Mining Company Inc. and co-founder and Chairman of Torex Gold Resources Inc. TMAC’s management team has an exceptional track record of discovering, defining and developing high grade, profitable underground mines.