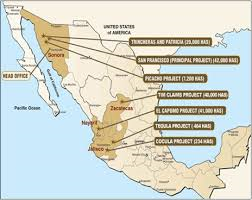 Timmins Gold Corp. (TSX:TMM) (NYSE MKT:TGD) and Newstrike Capital Inc. (TSX-V:NES) are pleased to announce that they have entered into a definitive arrangement agreement pursuant to which Timmins Gold has agreed to acquire all of the issued and outstanding common shares of Newstrike by way of a court approved plan of arrangement.

The combination of Timmins Gold and Newstrike will create an emerging intermediate, Mexican-focused gold producer with a portfolio of high-quality production and development assets all based in Mexico. With the San Francisco mine providing a solid base of operations, the combined company will have a leading growth profile driven by what Timmins Gold believes are two economically robust development projects with manageable capital requirements, Newstrike’s Ana Paula gold project and Timmins Gold’s Caballo Blanco gold project. In addition, the combined company will have a strong balance sheet to advance Ana Paula and Caballo Blanco and will benefit from Timmins Gold’s proven track record of delivering growth and value creation for its investors. The boards of directors of both companies have each unanimously approved the terms of the Arrangement Agreement (a common director of Timmins Gold and Newstrike having recused himself) and agreed to recommend that their respective shareholders vote in favour of the proposed Arrangement.

In connection with the Arrangement, Timmins Gold announces that it will undertake a non-brokered private placement of Timmins Gold Shares in an aggregate amount of up to C$10 million at a price of C$1.25 per Timmins Gold Share. Each of the two companies controlled by a trust settled by the late Adolf H. Lundin and Sentry Investments Inc. have indicated that they will participate in the Private Placement, together with other accredited investors. Completion of the Private Placement is conditional upon execution of definitive subscription agreements, closing of the Arrangement, TSX and NYSE MKT approvals and other conditions typical for a transaction of this nature. The proceeds of the Private Placement will be used to support the continued development of Ana Paula.

The Timmins Gold shares will be offered and sold in Canada on a private placement basis pursuant to certain prospectus exemptions. This press release does not constitute an offer to sell or a solicitation of an offer to buy any Timmins Gold Shares in the United States or in any other jurisdiction. The Timmins Gold Shares have not been and will not be registered under the United States Securities Act of 1933, as amended or any state securities laws and may not be offered or sold within the United States or to or for the account or benefit of a U.S. person unless registered under the U.S. Securities Act and applicable state securities laws or an exemption from such registration is available.

Upon completion of the Arrangement, the combined company will be owned approximately 63% by Timmins Gold shareholders and 37% by Newstrike shareholders (based on fully-diluted in the money shares outstanding and excluding common shares to be issued pursuant to the Private Placement).

“The combination of Timmins Gold and Newstrike will immediately position Timmins Gold as an emerging intermediate gold company supported by current production and a very attractive pipeline of development projects,” said Bruce Bragagnolo, CEO of Timmins Gold. Arturo Bonillas, President of Timmins Gold, added: “The assets and projects in both companies are highly complementary and we are excited about the many opportunities ahead for us to continue delivering value to Timmins Gold shareholders. This transaction provides significant benefits to Newstrike shareholders and is accretive to Timmins Gold on key financial and operating metrics.”

Commenting on the transaction, Richard Whittall, President and CEO of Newstrike, added “This transaction provides an attractive premium to Newstrike’s current share price, offers immediate leverage to gold production at the San Francisco mine and de-risks the future development of Ana Paula. We believe the consideration offered by Timmins Gold is highly attractive for our shareholders who will also have the opportunity to participate in the growth and re-rating potential of the combined company.”

Readers are reminded that the Ana Paula PEA and the Caballo Blanco PEA are preliminary in nature and include inferred mineral resources that are considered too speculative geologically to have the economic considerations applied to them that would enable them to be categorized as mineral reserves. There is no certainty that the Ana Paula PEA or the Caballo Blanco PEA will be realized. Mineral resources that are not mineral reserves do not have demonstrated economic viability.

The Arrangement Agreement includes a reciprocal non-solicitation covenant, the right of either Newstrike or Timmins Gold to accept a superior proposal in certain circumstances, with each party having a 5 business day right to match any such superior proposal for the other party. The Arrangement Agreement also provides for the payment by each of Newstrike and Timmins Gold of a C$5.5 million termination fee if the Arrangement is terminated in certain specified circumstances.

Upon completion of the Arrangement, one nominee of Newstrike will be appointed to the Timmins Gold board of directors.

National Bank Financial Inc. and Minvisory Corp. are acting as financial advisors to Newstrike. Blake, Cassels & Graydon LLP is acting as legal counsel to Newstrike. Cormark Securities Inc. has been engaged by the Special Committee to provide a fairness opinion.


Timmins Gold is in commercial gold production at its wholly owned San Francisco Gold Property in Sonora, Mexico. The mine is an open pit heap leach operation from which Timmins Gold has projected production of 115,000 to 125,000 ounces of gold in 2015 at a cash cost of US$800 to US$850 per ounce.