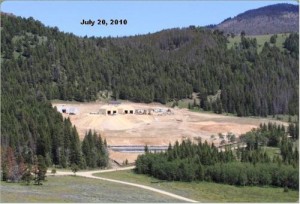 Timberline Resources Corporation (NYSE MKT:TLR)(TSX VENTURE:TBR) announced today that its joint venture company, Butte Highlands JV, LLC has received required approvals from the Mine Safety and Health Administration to access the Company’s underground gold mine being developed at the Butte Highlands Gold Project in southwest Montana. BHJV received MSHA approvals for its ventilation plan, escapeway plan, and its mine rescue plan. Preparations are well underway, and, with this authorization, further underground development work may commence, including additional underground exploration drilling and groundwater monitoring and dewatering wells.

Timberline President and CEO Paul Dircksen commented, “We are pleased that BHJV has received these MSHA authorizations and is now able to commence a number of initiatives in preparation for gold production. With the publication of our Draft Environmental Impact Statement related to the Hard Rock Operating Permit anticipated within a few days, and the expectation that our remaining two permit issuances are on the horizon, our JV partner is actively conducting additional exploration and preparing for further development and subsequent production.”

Preparations for additional development work at the Butte Highlands Gold Project include:

Timberline owns a 50-percent carried-to-production interest in BHJV, which owns the Butte Highlands Gold Project where mining is expected to commence following the issuance of the final hard rock operating permit and the U.S. Forest Service approval of a road-use plan of operations for material haulage. Timberline’s joint venture partner has and will continue to fund all mine development costs through to commercial production with Timberline’s share of those costs to be repaid from proceeds of future mine production.

Timberline Resources Corporation is exploring and developing advanced-stage gold properties in the western United States. Timberline holds a 50-percent carried interest ownership stake in the Butte Highlands Joint Venture in Montana. Timberline’s exploration is primarily focused on the major gold districts of Nevada, where it is advancing its flagship Lookout Mountain Project toward a production decision while exploring a pipeline of quality earlier-stage projects at its South Eureka Property and elsewhere. Timberline management has a proven track record of discovering economic mineral deposits that are developed into profitable mines.