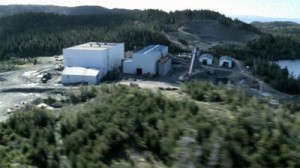 John B. Heslop, President and Chief Executive Officer of Thundermin said “we are looking forward to working with Rambler on the Little Deer Copper Project. Rambler has successfully brought the past-producing Ming Mine in Newfoundland back into commercial production. It is hoped that Rambler’s mining expertise will also lead to the resurrection of the Little Deer and Whalesback copper deposits in the future. The Little Deer and Whalesback copper deposits are in close proximity to Rambler’s port facilities at Goodyear’s Cove which could allow the possibility of bulk shipping of material to their Nugget Pond Processing Facility thus minimizing both future capital and operating costs at Little Deer”.

On November 1, 2011, results of a positive Preliminary Economic Assessment for the Little Deer copper deposit, on a stand-alone basis, were announced that indicate that there is potential to develop the Little Deer copper deposit on an attractive economic basis. The discovery of new copper resources at Whalesback during 2012, because of their proximity to Little Deer, expand the total mineral resources available for mining and may enhance the overall economics of establishing a new mining operation at Little Deer.

The NI 43-101 mineral resource estimates and PEA referred to above were prepared under the supervision of Mr. Eugene J. Puritch, P. Eng., President of P&E. Mr. Puritch is an independent Qualified Person in accordance with NI 43-101.

Mr. Andrew Hussey, P.Geo., is the Q.P. responsible for supervising all of the drilling programs at Little Deer and Whalesback for the purposes of NI 43-101.

Thundermin is a Canadian-based mineral exploration company focused on the exploration for and the discovery of economically viable base metal and gold deposits in Canada. Thundermin has an interest in, or the right to earn an interest in 12 base metal and gold properties in Canada. Thundermin owns a 100% interest in the Lebel Township gold property, which is located on the Kirkland Lake Main Break in the prolific Kirkland Lake gold camp. Thundermin has the right to earn a 100% interest in eight exploration licenses covering a large portion of the Stirling volcanogenic massive zinc-lead-copper-silver-gold sulphide belt located on Cape Breton Island, Nova Scotia. An initial diamond drill program undertaken on the property in 2012 was successful in intersecting copper mineralization in porphyritic volcanic rocks similar to those known to host massive sulphide deposits elsewhere. Thundermin has royalty interests in 12 base metal and gold properties located in Manitoba, Saskatchewan, British Columbia and Quebec, the most significant being a 2.5% net smelter return royalty in the Pelletier Lake gold deposit which is under option to QMX Gold Corporation. The Pelletier Lake property is currently in arbitration with Thundermin aiming to regain full ownership of the property. Thundermin also has various shareholdings in twelve other junior resource companies exploring for base metal, gold, chrome, and diamond deposits in Canada.