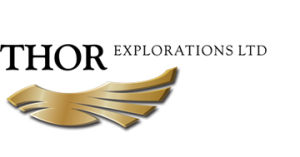 Thor has completed a preliminary exploration drilling campaign on five targets within the Ouere East target area (5 km2), which is located in the north of Thor’s Central Hounde Project (474 km2)

Ouere East is the first of a number of regional target areas which have been prioritised for follow-up work following early stage. Ouere East was prioritised due to a combination of a favourable geological setting and the presence of significant surface gold mineralisation. Gold mineralisation appears to be located on an important regional shear zone in a range of orientations within Birimian metamorphic units and adjacent to tonalite plutons.

The June 2013 initial exploration drilling programme consisted of 1,800m of RC drilling which tested 5 targets at Ouere East with 16 drill holes averaging 115m drill depth. Gold mineralisation was identified in each of the targets with 8 of the drill holes returning gold mineralisation over 0.5 g/t Au. The results of these drill holes are reported in the appendix at the end of this release..

The results of the drilling programme have allowed Thor to plan subsequent work at Ouere East to identify and prioritise further drill targets.

Following the end of the rainy season, Thor has now recommenced exploration at both the Central Hounde Project and the Douta Project in Senegal (577 km2).

“We are very encouraged by the results of our initial exploration drilling programme which reinforces our view that the Central Hounde Project is a large and prospective area of gold mineralisation. The targets tested at Ouere East are all open along strike and at depth and new fieldwork in the area will include the generation of new drill targets in the area. We are also optimistic that further fieldwork in both projects will demonstrate the potential of the project areas to host significant gold mineralisation.”

The Hounde belt is host to the Semafo Mana Mine which has been in production since 2009 and a number of other recent gold discoveries. The recent exploration discoveries by Semafo, Roxgold and Endeavour have average grades equal to or over 2.5 g/t Au and have been subject to resource upgrades in early 2013. A summary of these new discoveries is tabulated below.

Cautionary Note: Minerals resources disclosed herein relate to nearby properties owned by other companies, and the data presented have been extracted from those respective companies’ press releases. A qualified person has been unable to verify the information regarding any resources within adjacent properties, and such resources are not necessarily indicative of potential quantities or grades of mineralization on the Company’s own properties.

Thor’s Central Hounde Project is located approximately 100km along strike from the recent discoveries mentioned above, within the same greenstone belt. Thor commenced work on the Central Hounde Project in 2012 with regional exploration and reconnaissance trips into specific areas of the permit group. This work identified the Ouere East zone as the priority area for follow-up exploration. The Ouere East zone is intersected by the regional north-north-east oriented structure running along the Hounde belt, and was found to include a number of artisanal workings over a 5 km by 1 km area.

In late 2012, Thor initiated stage 1 of the exploration of Ouere East that consisted of selective rock chip sampling and assaying and mapping of the artisanal workings and regional soil sampling over the area. Stage 1 aimed to understand the local geology and structure of the area and to confirm gold mineralisation at the artisanal workings.

Stage 2 of the exploration plan of Ouere East commenced with the initial exploration drilling as reported in this press release, and further work in this stage is now underway with the aim of further developing the geological understanding of the area before further drilling is undertaken.

About the RC Drilling campaign

Drilling results reported here are for downhole intersections and are unlikely to represent the true width of mineralisation. Targets have been tested with too few drillholes to sufficiently understand the nature and orientation of mineralisation on this limited data.

Drill holes were sited to test the depth extensions of artisanal mineralisation and as such were drilled in a number of orientations. The dip of drill holes varied from -50 degrees to -60 degrees depending on the specific target.

Samples consisted of approximately 2.5 kg of representative material riffle split from 1m drilled intervals. Samples were dispatched to ALS laboratories in Ouagadougou, Burkina Faso where samples were prepared by fine crushing and pulverising. Samples were analysed by fire assay of a 50g charge with Atomic Absorption finish with a lower detection limit of 0.001 g/t Au.

Quality Assurance and Quality Control procedures were in place for the drilling programme and included the use of certified reference materials, field duplicates and blank samples. The QAQC programme identified no irregularities in drilling programme. The QAQC results have been reviewed by Dr. Field who is a Qualified Person under National Instrument 43-101.

The scientific and technical information contained in this press release has been reviewed by Dr. Matthew Field, Pr.Sci.Nat, who is a qualified person for the purpose of National Instrument 43-101 and an employee of AMEC who have been engaged by Thor Explorations Ltd. to provide advice on exploration data collection and resource estimation. Dr. Field visited the Central Hounde Project during the drilling project in June 2013. His knowledge of Thor’s property is limited to information supplied by Thor for review plus public domain information relating to the adjacent properties referred to in this press release.

Thor Explorations Ltd. is a Canadian mineral exploration company engaged in the acquisition, exploration and development of mineral properties located in Senegal and Burkina Faso. Thor holds a 70% interest in the Douta Gold Project located in southeastern Senegal. The Douta Gold Project lies within the Kenieba Inlier which hosts significant gold resources and has attracted major international mining companies. Thor also holds an 85% interest in the Bongui and Legue gold permits located in Hounde greenstone belt, and a 100% interest in the Ouere gold permit in south west Burkina Faso. The three Burkina Faso permits comprise the Central Hounde Project. Thor trades on the TSX Venture Exchange under the symbol “THX”.