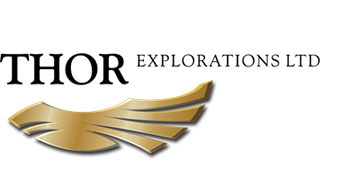 Thor Explorations Ltd. (TSX-V: THX) is pleased to announce an encouraging first set of drill results from the southern Makosa Tail Prospect at its Douta Project, Senegal. The exploratory drilling program was designed to infill the initial wide-spaced drilling that was completed in late 2020 which led to the Makosa Tail discovery. The results received to date confirm the continuation of the Makosa mineralised system along strike to the south.

“The Makosa Tail prospect continues to deliver encouraging drilling results with numerous significant intersections reported from the near-surface zone in the follow-up program to the initial discovery holes that were drilled in late 2020. This is excellent start to the larger exploration and resource definition drilling campaign and has achieved the initial objective of testing Makosa Tail which is open along strike and at depth. We are looking forward to completing the ongoing drilling between Makosa Tail and Makosa and receiving the results, after which the rig will be moved to Makosa North to test the northern extension of Makosa.”

The Douta Gold Project is a gold exploration permit that covers an area of 58 km2 and is located within the Kéniéba inlier, eastern Senegal. The northeast trending permit (Figure 1) has an area of 58 km2. Thor, through its wholly owned subsidiary African Star Resources Incorporated contractually acquired a 70% interest in the licence from the permit holder International Mining Company SARL. IMC has a 30% free carry until the announcement by Thor of a Probable Reserve.

The Douta licence is strategically positioned 4km east of the deposits Massawa North and Massawa Central deposits which form part of the world class Sabadola-Massawa Project that is owned by Teranga Gold Corporation (Figure 1).

Makosa Tail was discovered in late 2020 in an initial 21 RC drillholes that targeted the interpreted southern extensions of the Makosa mineralised system (Figure 2).

The results are from the exploratory RC drilling program at Makosa Tail are shown in Table 1 and Figure 2. The full table of results is attached in Appendix 1.

The follow up RC program was completed using a reduced line spacing of 50m over Makosa Tail. The program comprised 3,765m completed in 52 holes with an average depth of 72m. The focus of the drilling was on near-surface potential over the previously drilled strike length on Makosa Tail.

The results indicate multiple parallel, steep north-westerly dipping, mineralised horizons that are developed within a shale/greywacke sequence. Most significant, is the discovery of several higher grade zones towards the southern end of the drilled area where the drill coverage is wide-spaced.

The Makosa Tail drilling has intersected multiple parallel lodes over a strike length of 1,000m with a higher grade zone potentially extending for 300m.

Significantly, there is a 1,600m strike length between Makosa Tail and Makosa that is yet to be drill-tested.

Systematic infill and step-out drilling is planned to fully assess the ever-increasing scale of the project.