On this day in Canadian history (September 9th 1954), sixteen-year-old Marilyn Bell became the first person to swim across Lake Ontario. The Toronto-born athlete swam 52 km during her 21 hours in the cold lake. Marilyn was competing in an organized event and was the surprise winner. When she finally crawled onto shore at the CNE ground in Toronto, Ontario, the young Canadian schoolgirl was cheered by a waiting crowd of about 100,000 people. 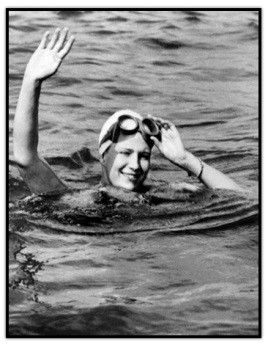 Marilyn Grace Bell was the first person to swim across Lake Ontario and later swam the English Channel and Strait of Juan de Fuca.

Generation Mining Limited (CSE:GENM) is pleased to report that a new independent Mineral Resource Estimate of the Marathon Deposit of the 51%-owned Marathon palladium-copper project in Northern Ontario estimates a 20% increase in contained Palladium-Equivalent ounces compared with the most recently published Mineral Resource on the Property from 2010. >> Learn more

Sunniva Inc. (CSE:SNN) (OTCQB:SNNVF), reports that its wholly owned subsidiary, Natural Health Services Ltd. has been named in a class action lawsuit filed in the Court of Queen’s Bench in Alberta in connection with the previously reported privacy breach of the Electronic Medical Record system used by NHS.  >> Learn more

Blox Labs Inc. (CSE: BLOX) (Frankfurt: BR1B) (OTC:BLLXF) is pleased to announce that further to its news release dated August 29, 2019, the Company has completed all matters relating to its change of business, including receiving final approval from the Canadian Securities Exchange, completion of a name change to Sire Bioscience Inc., and pursuant to a CSE bulletin, will commence trading on the CSE under the symbol “SIRE” on September 11, 2019. >> Learn more

Top Strike Resources Corp. d.b.a. Vencanna Ventures Inc. (CSE: VENI) announces its intention to commence a normal course issuer bid. Under the Bid, the Corporation may purchase up to 5% of the Corporation’s issued and outstanding common shares. >> Learn more

Chemesis International Inc. (CSE: CSI) (OTC: CADMF) (FRA: CWAA), announces that its subsidiary, Natural Ventures PR LLC, has entered into an agreement to purchase  three cannabis dispensary operations in Puerto Rico from Caribbean Green LLC in exchange for $1.3 million USD in cash over 24 months. The Dispensaries are currently operating under the Caribbean Green brand and will generate approximately $3,600,000 USD in revenues for calendar 2019. >> Learn more

Kontrol Energy Corp. (CSE: KNR) (OTCQB:RLF) (FSE:1K8) is pleased to announce that it has secured a pilot for continuous process improvement, through its wholly owned subsidiary, CEM Specialties Inc. in the facility of a global leading plant-based meat substitute company. >> Learn more

AREV Brands International Ltd. (CSE – AREV) is pleased to announce that it is negotiating to acquire 50 per cent of Lighthouse Genomics Inc. Lighthouse will remain an independent operating entity with voting control and an agreement to provide AREV holdings with preferential access to genomic analysis to inform AREV breeding operations with advanced genetic science. >> Learn more

Sunniva Inc. (CSE:SNN) (OTCQB:SNNVF) and The Clinic Network Canada, Inc. are pleased to announce that they have entered into a share purchase agreement dated September 10, 2019, pursuant to which Sunniva has agreed to sell Natural Health Services, Ltd. to TCNC, one of Canada’s largest provider of ‘out-of-hospital’ chronic pain management services, for CAD $9.0million subject to customary working capital adjustments at Closing. >> Learn more

Canadian Metals Inc. (CSE: CME) is pleased to announce that further to its news release dated July 15 and September 4, 2019, the Company will consolidate its common shares on a ten (10) for one (1) basis with the record date of September 17, 2019 and will begin trading on the Canadian Securities Exchange on a post-consolidated basis effective September 16, 2019. >> Learn more

Wayland Group Corp. (CSE:WAYL) announced today that it has been made aware that a statement of claim in a proposed securities class proceeding was issued in Ontario against the Company, the former CEO of the Company and two investment banking firms engaged by the Company in connection with certain capital markets transactions in 2018. >> Learn more

Capital Inc. is pleased to announce that it has entered into a binding letter of intent with Eagle Plains Resources Inc. to enter into and execute a property option agreement in respect to the Acacia Property whereby the Company shall have the right and option to acquire a 60% interest in the Acacia Property by issuing in stages a total of 300,000 common shares of the Company and by incurring a total amount of $2,500,000 in property related expenditures over a period of five years. >> Learn more

NexTech AR Solutions (CSE: NTAR) (OTCQB:NEXCF) (FSE:N29) is pleased to announce it has entered into an agreement with Gunwerks, a leading online supplier of high-end custom shooting systems, in order to provide their customers with the ability to preview the product through augmented reality, as part of the purchasing process. >> Learn more

Last month, the S&P/TSX Composite fell as much as 0.4 per cent in early trading as U.S.-China trade tensions showed no sign of easing and uncertainties around Brexit remained. Stocks in Europe and Asia fell Tuesday, and American stock indexes also slumped.