On October 8, 1958, a Swedish doctor implants a pacemaker in a 43-year-old man during open-heart surgery. This world first is achieved in part because of groundbreaking work by Canadian John A. Hopps, an electrical engineer from Winnipeg, Manitoba. 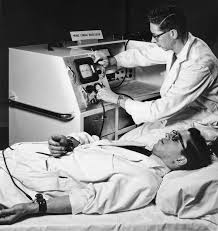 John A Hobbs works with the first artificial Pacemaker

In the 1940s, while conducting research in an Ottawa laboratory, Hopps noticed that when a heart stops beating as a result of hypothermia, it can be restarted by electrical stimulation. He continued his work at Toronto’s Banting Institute with colleagues Bigelow and Callaghan. This led to the invention in 1951 of the very first external pacemaker, which was the size of a toaster. Others inspired by Hopps’ work and research created the first implantable pacemaker in the late 1950s.

iAnthus Capital Holdings, Inc. (CSE: IAN) (OTCQX: ITHUF) which owns, operates, and partners with best-in-class regulated cannabis operations across the United States, is pleased to announce that Gotham Green Partners has invested an additional $20.0 million through the purchase of senior secured convertible notes from iAnthus. GGP’s investment is part of a broader $100.0 million financing plan to support the buildout of all existing markets in which the Company currently operates. – Read More

Auxico Resources Canada Inc. (CSE: AUAG) is pleased to announce that it has signed an option agreement to acquire a 100% interest in the Porto Grande Property located in the state of Amapá, Brazil. The Property is currently owned by Retiro Gonçalves / Mineração Tantaline and represents a surface area of approximately 739 hectares, located 60 km from the city of Porto Grande. The Property has exploration and commercialization (export) permits in place for tin, gold, tantalum and niobium. –  Read More

Pivot Pharmaceuticals Inc. (CSE: PVOT) (TCQB: PVOTF)   (FRA:  NPAT) has entered into a contract manufacturing and supply agreement with F&B Cosmetics to  manufacture Pivot’s differentiated portfolio of CBD based wellness products in the United States  Pivot will enter the US market in Q1 2020 with its differentiated CBD based products using Pivot’s  patented technologies. –  Read More

Generation Mining Limited (CSE:GENM) is pleased to provide an update on its 12,000-metre exploration program which is testing multiple targets along more than 20 km of prospective strike length at its 51% owned Marathon deposit located 10 km from the Town of Marathon, Ontario. –  Read More

World-Class Extractions Inc. (CSE: PUMP) (FRA:WCF) a vertically integrated provider of advanced extraction and processing systems is pleased to announce the signing of a binding Letter of Intent to establish a joint venture with Canntab Therapeutics Limited (CSE:PILL.CN) to set-up, manage and operate a cannabis and hemp extraction and processing facility at Canntab’s manufacturing center in Markham, Ontario  – Read More

Stillcanna Inc. (OTC:SCNNF) (CSE:STIL) (FRANKFURT:A2PEWA) is excited to announce a completed and signed a definitive agreement to supply Sequoya Cannabis with hemp biomass from its Polish farms. Under the terms of the agreement Stillcanna will provide dried flowers from the tops of the hemp plant, with humidity not to exceed 10%, and a Cannabinoid content of 5% or above. The biomass will be 3rd party tested and free of pesticides, heavy metals, toxins and microbials. Read More

Ortho Regenerative Technologies Inc. (CSE: ORTH) an emerging Orthobiologics company, announced today that it has closed a non-brokered $1.6 million private placement of convertible debenture units consisting of $750,000 of subscriptions and $894,000 from conversion of loans from Manitex Capital Inc. – Read More

Razore Rock Resources Inc. (CSE:RZR) wishes to announce that it has signed an Option Agreement with True North Gems Inc. to earn up to a 70% working interest in the True Blue Property in the Yukon Territory.  – Read More

GLOBAL GAMING TECHNOLOGIES CORP. (CSE:GGAM) (FSE:BWSP) (OTC Pink:BLKCF) has announced that effective September 25, 2019 the Company, through its wholly-owned subsidiary, X2 Games Corp. has entered into a licensing agreement with Virsix Games, Inc. Under the Agreement, Virsix will have use of the licensed intellectual property for the St. Noire board game. – Read More

Cannabis One Holdings Inc. (CSE:CBIS) reports on significant growth of its Honu Brand in Pacific Northwest and launch of new brands in Washington  – Read More

Harborside Inc. (CSE: HBOR), a California-focused, vertically integrated cannabis enterprise, announced today it has acquired full ownership of San Leandro Wellness Solutions, Inc. Harborside previously owned 50% of the dispensary under a joint venture with Dark Heart Nursery, and would have provided management services to the store upon opening in Q4 of this year. With the close of this Transaction, Harborside now operates three dispensaries in the San Francisco Bay Area, alongside their flagship Oakland and San Jose locations.  – Read More

Pike Mountain Minerals Inc. (CSE: PIKE) is pleased to announce that it has entered into a non-binding letter of intent dated October 10, 2019 to acquire Influencers Interactive Inc. a private British Columbia company involved in the business of online gaming, in exchange for common shares of Pike. – Read More

The lethargic downslide of the market continues for another week as The CSE index closed at 439.89 down from last weeks close of 477.11

As the rainy season opens here on the Wet coast of Canada, we can be reminded that it can always be wetter because on Oct 6, 1967 489.2 mm of rain fell in Uculet on the western edge of Vancouver Island for the wettest single day rainfall in Canada. Only 8 more months to go until the Summer dry season