This Week on the CSE – July 8th through 12th

This Week in Canadian history, July 9, 1960: Seven-year-old Roger Woodward is the first person to survive going over Niagara Falls without a barrel.

Family friend James Honeycutt is on the Niagara River in his aluminum boat with young Roger and his teen-aged sister Deanne. When the engine dies, quick-thinking Honeycutt orders the children to put on life jackets.

The boat is pulled into the current and overturns. Deanne is rescued by two men standing on the shore, while Roger and James go over the Horseshoe Falls. Honeycutt drowns, but little Roger survives thanks to his life jacket. 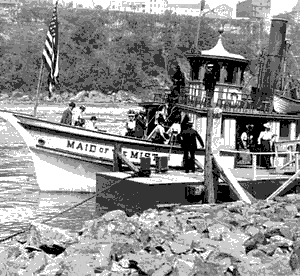 The boy is picked up by the Maid of the Mist after a harrowing eight minutes under the falls.

Three of five properties being acquired, have been drilled in the past, have a combined conceptual estimated resource of 2,430 – 3,940 Mt at an average grade of approximately 30%. The other two Iron Projects are new discoveries.

Stillcanna Inc. (CSE:STIL) announce final preparations for the harvesting of its 2019 crop are being implemented by its Olimax team in Poland.

Production of 3.875 kilograms of gold/silver doré during June resulted in revenues of $81,610.

In particular, hole CH‐013 encountered an aggregate of 303.35 m of anomalous mineralization consisting of eight separate intervals beginning at the start of bedrock at approximately 56.6 m and continuing to near the end of the hole at 450 m.

Lexaria Bioscience Corp. (CSE: LXX) has entered a definitive 5-year agreement, via its subsidiary Lexaria Hemp Corp, to provide Lexaria’s patented DehydraTECH technology to Nic’s Beverages Ltd for use in CBD-based beverages to be produced and sold throughout the United States.

New Jersey Mining Company (CSE:  NJMC) announced favorable results from an inhouse column leach test of lower-grade gold mineralized material from the footwall of the Idaho Fault at the Golden Chest Mine in Murray, Idaho.

NJMC Vice President, Grant Brackebusch, “The test achieved 89% gold recovery after just 11 days of leaching.  As demonstrated by these results, the oxidized footwall material in the current open pit at the Golden Chest is readily amenable to heap leaching and the time required to achieve maximum gold recovery is relatively short.  We intend to conduct additional column tests of other mineralized material at the Golden Chest Mine so we can fully assess the potential economic benefits of processing lower grade mineralized material

21C Metals Inc. (CSE: BULL) commencemed exploration on the German portion of the Tisova project. The aim of the exploration is to assess the Copper – Cobalt potential in the past producer in the Czech Republic.

Previous soil sampling completed has defined a cobalt anomaly that has a footprint of approximately 300×300 metres. This anomaly is greater than 25 ppm cobalt and has not been explained or followed up with groundwork. Other stream sediment samples in the area have indicated copper and cobalt anomalies.

Lots of buzz among cannabis investors this week, as the Ontario Securities Commision investigates a possible breach of duty against Canntrust Inc.

Did the company put investors at undue risk by growing cannabis in unlicenced rooms?

Apparently, an employee may have staged an area for regulators by putting up fake walls to hide the unlicenced grow during an inspection.

If so, the company could be on the hook for a lot more than just a plumetting share price.

Stories like these make it hard when speaking to investors about the cannabis industry – many are just not willing to take the risk.

Yet, others see this as the inevitable growing pains of converting a black/grey market product into the biggest cash cow we will likely see in our times.