On this day in Canadian history (August 6, 1931), the Canadian Bank of Commerce (CIBC) opened its new head office at King & Bay streets; and was, at the time, the tallest building in the Commonwealth.

In the early 20th century, new construction methods and civic pride shuffled the “tallest” title from city to city with regularity. Yet the bank tower, one of the last major buildings constructed in Toronto before the onset of the Depression, held the title from December 1931 until 1962 with its 34-storeys and 141-metre height.

The main banking hall’s massive, vaulted ceiling resembles that of a cathedral while sculpted heads representing Courage, Observation, Foresight, and Enterprise overlook the city from the thirty-second floor observation deck. Long before the CN Tower, the observation deck’s unobstructed views of the city, harbour, and surrounding countryside allowed citizens to gaze at their city in an entirely different way. 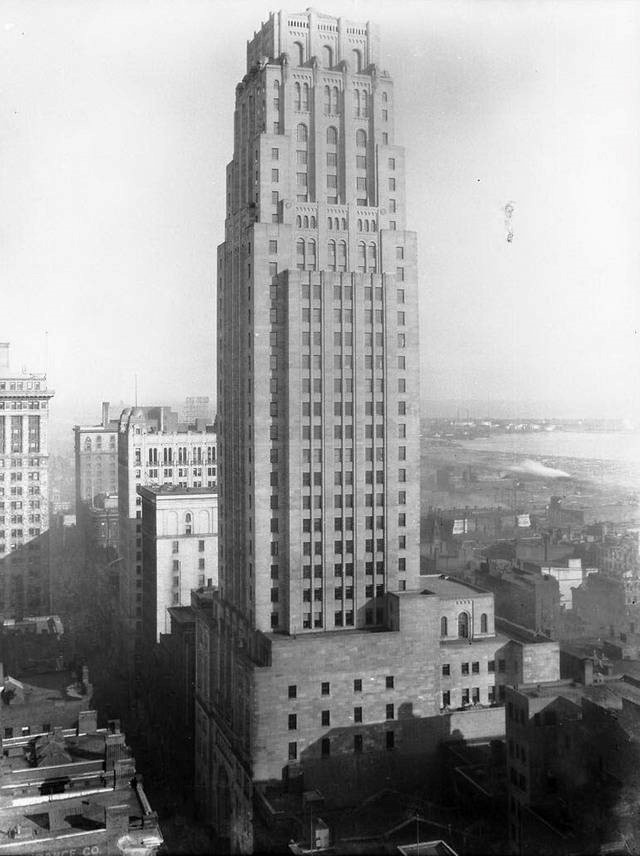 The Canadian Bank of Commerce head office was the tallest building in the commonwealth from 1931-1962. 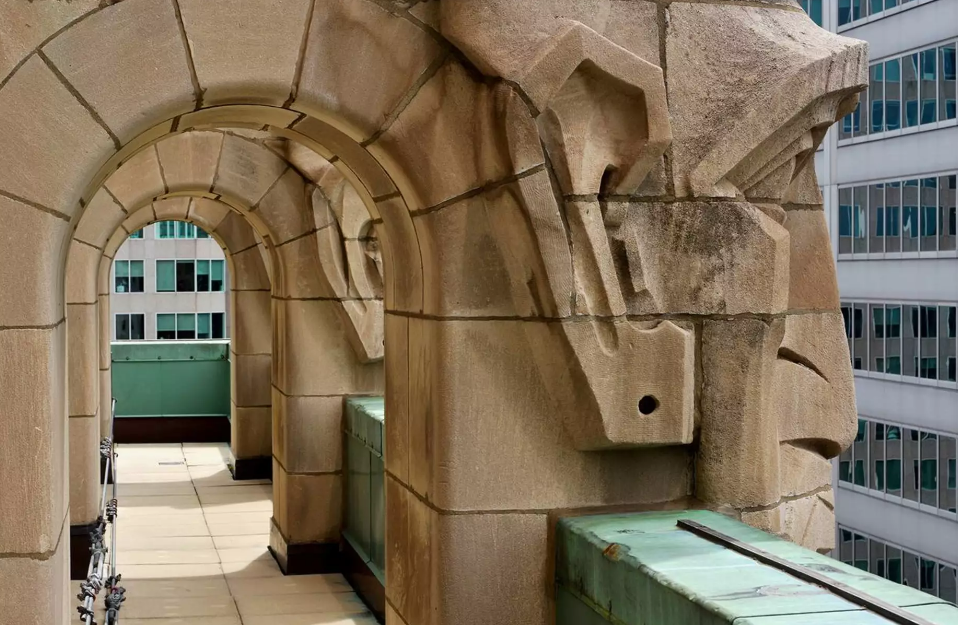 In the 1930s, standing on the observation deck, one could see a huge swath of Toronto and its surrounding area from the sky.

Chemesis International Inc. (CSE: CSI) (OTC: CADMF) (FRA: CWAA), announces that it has entered into binding share exchange agreements with certain shareholders of GSRX Industries Inc. (OTCQB: GSRX), pursuant to which the Company will acquire an aggregate of 42,634,124 common shares and 1,000 preferred shares of GSRX, in exchange for an aggregate of 18,915,738 Chemesis common shares to be issued to the Selling Shareholders. >>Learn more

Wayland Group (CSE:WAYL) is pleased to announce that it has signed a non-binding letter of intent relating to the proposed sale its Canadian business, including its Langton, Ontario production facility to Cryptologic Corp. for anticipated consideration of 57,500,000 Cryptologic common shares at a deemed issue price of $4.00 per share, which is expected to represent approximately 70% of the issued and outstanding Cryptologic common shares outstanding following closing, and the assumption by Cryptologic of liabilities relating to Wayland’s Canadian business. >> Learn more

Citation Growth Corp. (CSE: CGRO) (OTCQX: CGOTF), a licensed cannabis cultivator and producer, is pleased to announce that, further to the Company’s press release dated July 24, 2019, on August 2, 2019 it closed the previously announced transaction to acquire the ACC Group of Companies, a Nevada-based group of companies licensed for cannabis cultivation and well-known for its award-winning cannabis cultivars. >> Learn more

Versus Systems Inc. (CSE: VS) (OTCQB: VRSSF) (FRANKFURT: BMVA) announces that it has executed an agreement with HP, Inc. (NYSE:HPQ) to license Versus’ WINFINITE technology for use in HP products and services. The agreement provides for the non-exclusive use of Versus’ technology and prizing software by HP and for access to the WINFINTE platform. >>Learn more

Grand Peak Capital Corp. (CSE: GPK) announces it has closed a first tranche of its offering of unsecured convertible debentures. The Company has raised $1,100,000. >> Learn more

EMPOWER CLINICS INC. (CSE: CBDT) (Frankfurt 8EC) (OTC: EPWCF), a vertically integrated and growth-oriented CBD life sciences company, and a multi-state operator of medical health & wellness clinics in the U.S., is pleased to announce it has entered into a strategic partnership with Endocanna Health Inc., a research and development biotechnology company specializing in endocannabinioid DNA testing, and a partly owned subsidiary of Heritage Cannabis (CSE: CANN).

Rubicon Organics Inc. (CSE: ROMJ) (OTCQX: ROMJF) is pleased to announce that in connection with its previously announced overnight marketed offering, it has priced its public offering of units of the Corporation. >>Learn more

C21 Investments Inc. (CSE: CXXI and OTC: CXXIF) today announced unaudited financial results for the three months period ending July 31, 2019. Unaudited revenue grew 27% to $9.8 million from $7.7 million in Q1. Unless otherwise stated, all currency is in US dollars and all results are preliminary and unaudited. The Q2 financial statements and MD&A will be released by September 12, 2019. >> Learn more

International Cannabrands Inc. (CSE:JUJU)  is pleased to announce that it has signed a letter of intent with Albert Einstone’s LLC, a fully-licensed, vertically integrated California cultivation, distribution and manufacturing company with state-of-the-art indoor warehouses in downtown Los Angeles. >> Learn more

GreenStar Biosciences Corp. (CSE:GSTR), a growth-oriented technology and services company that provides real estate, financial, management and other support to licensed cannabis businesses in the United States, is pleased to announce that it has retained Integral Wealth Securities Ltd. to provide Market-Making services in accordance with Canadian Securities Exchange policies. >> Learn more

Wayland Group (CSE:WAYL) and Cryptologic Corp. (CSE: CRY) are pleased to announce that Wayland has now received the previously announced $5 million bridge loan from Cryptologic, which has been advanced in connection with the proposed sale of Wayland’s Canadian business to Cryptologic. >> Learn more

Aquarius Surgical Technologies Inc. (Ticker symbol ASTICSE) announces that it is initiating a non-brokered Private Placement offering of Units to raise a minimum of $500,000 and up to a maximum of $2.5 million from accredited investors. >>Learn more

Relay Medical Corp. (CSE: RELA, OTC: RYMDF, Frankfurt: EIY2), a developer of MedTech innovation, is pleased to announce that the Company has completed the second tranche of the private placement financing for gross proceeds of $542,000 through the issuance of 2,710,000 Units at a price of $0.20 per unit. The aggregate gross proceeds raised pursuant to the first and second tranches of the Offering was $2,074,500 through the issuance of 10,372,500 Units. >> Learn more

Wayland Group (CSE:WAYL) and Cryptologic Corp. (CSE: CRY) are pleased to announce that Wayland has now received the previously announced $5 million bridge loan from Cryptologic, which has been advanced in connection with the proposed sale of Wayland’s Canadian business to Cryptologic. >> Learn more

Blueberries Medical Corp. (CSE: BBM) (OTC: BBRRF) (FRA: 1OA), a leading Latin American licensed producer of medicinal cannabis and cannabis-derived products, announces a non-brokered private placement of up to 12,000,000 units at a price of C$0.25 per Unit for gross proceeds of up to C$3,000,000. Each Unit will consist of one common share in the capital of the Company and one Share purchase warrant. >> Learn more

Economic expansion remains broad-based, with investment and exports picking up steam. So far, exports are up 2% compared with a year ago. While services and goods exports have grown, the latter haven’t kept up with foreign demand. What it all means: It’s a great opportunity for Canadian businesses to sell more abroad, diversify their markets and push forward the economy as a whole.