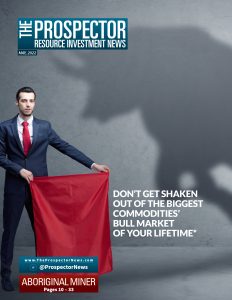 Because if you don’t plan your work (now) and work your plan (consistently going forward)…you most assuredly will!

Continuing Recent Option Agreements by Maple and Orford, now Producing their own News, as Reported by Your Author

12          Sassy Resources’ shareholder value proposition is stronger than ever

Sassy builds value with robust equity position in Gander Gold spinout, entry into the uranium bull market, and highest-grade results yet at the Foremore project

Dolly Varden Silver Corporation (TSXV: DV) has had a remarkable year so far.

Loyal readers of The Prospector News know by the world is committed to a cleaner tomorrow.

As the clean energy revolution calls for more uranium, NexGen is positioning Canada as a top global producer

Since my last article in the November issue about Denarius Metals the company has made quite the progress.

As we embark on a new year, vanadium continues to emerge as one of the most promising yet understated opportunities.

48          SCIENCE IS UNLOCKING THE POTENTIAL OF BC’s GOLDEN TRIANGLE

The Golden Triangle is widely recognized as one of the most richly mineralized areas on the planet.

If you’re a bit older than me, you may associate lithium with a sedative used in psychiatric medication, and you wouldn’t be wrong.

As this is written, the Federal Open Market Committee has commenced its latest meeting to set monetary policy.


The November/December Edition of the Prospector News is Available forDownload