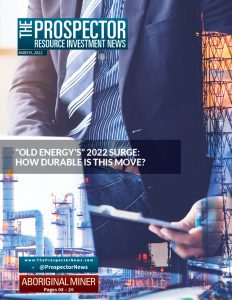 Tellurium is highly involved in the energy transition and is considered a technology-critical element.

CAVU Mining responds to a global supply and demand imbalance by exploring what could be a world-class copper project in Yukon.

While gold mining in British Columbia is often associated with the Golden Triangle, Talisker Resources (TSX: TSK) has been hard at work tapping into enormous potential located in the south-central region of the province.

Bioleaching is a process that uses natural bacteria, to recover metal with eco-friendly remediations solutions.

Australia’s largest gold producer entered the Golden Triangle two years ago by paying U$800 million for a controlling stake in the Red Chris copper-gold mine.

Buyer Beware! Mergers and Acquisitions (M&A) are expected to increase in the mining sector over the coming years.

The Mon is right in the middle of the 100 km long belt. In its most recent production, the Mon Gold Mine only went down 15 metres (following high grade) […]

South-eastern Peru has been undergoing a major gold rush since the early 2000’s, rocketing to the top spot in terms of gold production in Latin America […]

It’s rather remarkable how a single geological process – in this case porphyry formation – can lead to such a diversity of mineralization and deposit styles.

It might be called the Golden Triangle, but as any mining enthusiast in British Columbia knows, there’s more than just gold in those mountains.

A comprehensive research report by Market Research Future on lithium-ion Battery Recycling Marketing shows that this market is projected to be worth U$24.31 billion by the year 2030.

While our passion for mineral exploration and mining has not changed, some things in the world most certainly have—including the dates and appearance of the PDAC Convention, which is celebrating its 90th anniversary in 2022.


The November/December Edition of the Prospector News is Available forDownload