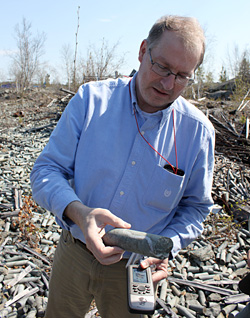 TerraX Minerals Inc. (TSX-V:TXR) (FRANKFURT:TX0) has entered into a purchase agreement for the UBreccia property, which is contiguous with and immediately west-southwest of its Northbelt property in the Yellowknife City Gold Project, Northwest Territories, Canada. The Ubreccia property consists of three claims totaling 1,394 hectares; it is being purchased from Panarc Resources Ltd for 75,000 common shares, subject to acceptance for filing by the TSX Venture Exchange. Panarc will retain a 1% NSR, of which 0.5% can be purchased by TerraX at any time for $1,000,000.

The property is bisected by the major, late, north to north-northwest trending West Bay and Akaitcho faults, which intersect on the property. These faults displace the Con and Giant ore systems approximately 5 km south of the property. The West Bay Fault also serves as the western boundary for the Yellowknife Greenstone Belt in this area. Mafic rocks of the greenstone belt comprise on the order of one third of the property; the remainder is underlain by felsic plutonic rocks of the Defeat Plutonic Suite.

Gold occurs in shears, quartz veins and fault breccias associated with late north-northwest trending structures in the Defeat Plutonic Suite on the Uptown Property, which adjoins the UBreccia Property to the south. Grab samples with up to 113.5 g/t Au have been obtained from these structures. Preliminary prospecting on the property by Panarc revealed the presence of silicified and hematized fault breccias up to 100 m wide with minor gold anomalism (up to 94 ppb).

The technical information contained in this news release has been approved by Tom Setterfield, Vice President Exploration of TerraX, who is a Qualified Person as defined in “National Instrument 43-101, Standards of Disclosure for Mineral Projects.”

About Northbelt and the Yellowknife City Gold Project

With the addition of the Ubreccia property, TerraX’s Yellowknife City Gold Project now encompasses approximately 8,400 hectares of contiguous land immediately north of the City of Yellowknife in the Northwest Territories and includes TerraX’s wholly-owned Northbelt property acquired in February 2013.

The Northbelt gold property encompasses 3,562 hectares on the prolific Yellowknife belt, all within 15 km of the city of Yellowknife, and covers 13 km of strike on the northern extension of the geology that contained the Giant (7.8 Moz) and Con (5.5 Moz) gold mines. The Northbelt property is host to multiple shears that are the recognized hosts for gold deposits in the Yellowknife camp and it contains innumerable gold showings.

TerraX has carried out a strategy of acquiring prospective ground adjacent to Northbelt and in October 2013 entered into an option agreement whereby it can acquire a 100% interest in the Walsh Lake gold property, which is contiguous with and immediately east of Northbelt. The Walsh Lake property consists of seven leases and five claims totaling 6,659 acres (2,695 hectares). TerraX has also staked ground to the west of Northbelt to cover prospective geology that is on strike from Northbelt structures.