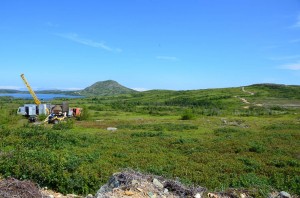 TerraX Minerals Inc. (TSX-V:TXR) (FRANKFURT:TX0) (PINKSHEETS:TRXXF) has completed the winter portion of its Phase 1 drill program at the Yellowknife City Gold project, Northwest Territories. During this program, TerraX drilled 14 holes totaling 2,305 m, including 4 holes on Homer (1,001 m), 4 holes on Crestaurum (533 m), and 5 holes on the northern extension of the Barney Shear (751 m). TerraX is awaiting assay results and will report these in due course as they become available.

The summer drill program is scheduled to begin in mid-June once water levels recede and ground conditions improve. A further 3,500 m of drilling is planned during the summer program, made up of approximately 1,000 m at Crestaurum and 2,500 m at the Barney Shear Zone.

The technical information contained in this news release has been approved by Joseph Campbell, the President of TerraX, who is a Qualified Person as defined in “National Instrument 43-101, Standards of Disclosure for Mineral Projects.”

The Northbelt gold property encompasses 3,562 hectares on the prolific Yellowknife belt, all within 15 km of the city of Yellowknife, and covers 13 km of strike on the northern extension of the geology that contained the Giant (7.8 Moz) and Con (5.5 Moz) gold mines. The Northbelt property is host to multiple shears that are the recognized hosts for gold deposits in the Yellowknife camp and it contains innumerable gold showings and historic high grade drill results.

TerraX has carried out a strategy of acquiring prospective ground adjacent to Northbelt and in October 2013 entered into an option agreement whereby it can acquire a 100% interest in the Walsh Lake gold property, which is contiguous with and immediately east of Northbelt. The Walsh Lake property consists of seven leases and five claims totaling 6,659 acres (2,695 hectares). TerraX has also staked and acquired ground to the west of Northbelt to cover prospective geology that is on strike from No