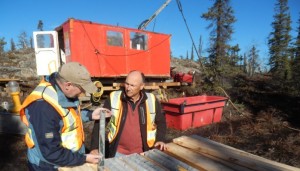 With completion of this financing, TerraX has cash on hand in excess of $11.7 Million which will be more than adequate to fund the 27,000 meter drill program and extensive field exploration programs currently underway on our wholly owned Yellowknife City gold project in the Northwest Territories. Drilling commenced on July 27th and is continuing at the Mispickel discovery, where TerraX intercepted 8.00 m @ 60.60 g/t Au during its winter drill program earlier this year.

The Yellowknife City Gold encompasses 129 sq km of contiguous land immediately north and south of the City of Yellowknife in the Northwest Territories. Through a series of acquisitions, TerraX now controls one of the six major high-grade gold camps in Canada. Being within 15 km of the City of Yellowknife, the YCG is close to vital infrastructure, including transportation, service providers, hydro-electric power and skilled tradespeople.

The YCG lies on the prolific Yellowknife greenstone belt, covering 23 km of strike length on the southern and northern extensions of the shear system that hosted the high-grade Con and Giant gold mines. The project area contains multiple shears that are the recognized hosts for gold deposits in the Yellowknife gold district, with innumerable gold showings and recent high grade drill results that serve to indicate the project’s potential as a world-class gold district.