Taranis Resources Inc. [TSX-V: TRO) (OTCQB: TNREF] is excited to report on exploration progress at its 100%-owned “Thor” silver, gold, zinc, and copper polymetallic deposit located near Trout Lake in southeastern British Columbia. In summer 2021, Taranis drilled a total of ten holes testing the Ridge Target; only the first three (Thor-218, 219 and 220) are discussed here. Details of the remaining drill holes will be discussed as assay results become available to the company.

A new discovery was made testing the Ridge Target (henceforth referred to as the Thunder Zone), located north and east of the Blue Bell Zone. The Thunder Zone was discovered on the south side of Thor’s Ridge, underneath a paleo-landslide which has detached a portion of Thor’s Ridge. This paleo-landslide was not a recognized aspect of the area’s geomorphology until 2021 due to its concealment under undisturbed forest growth in the area. 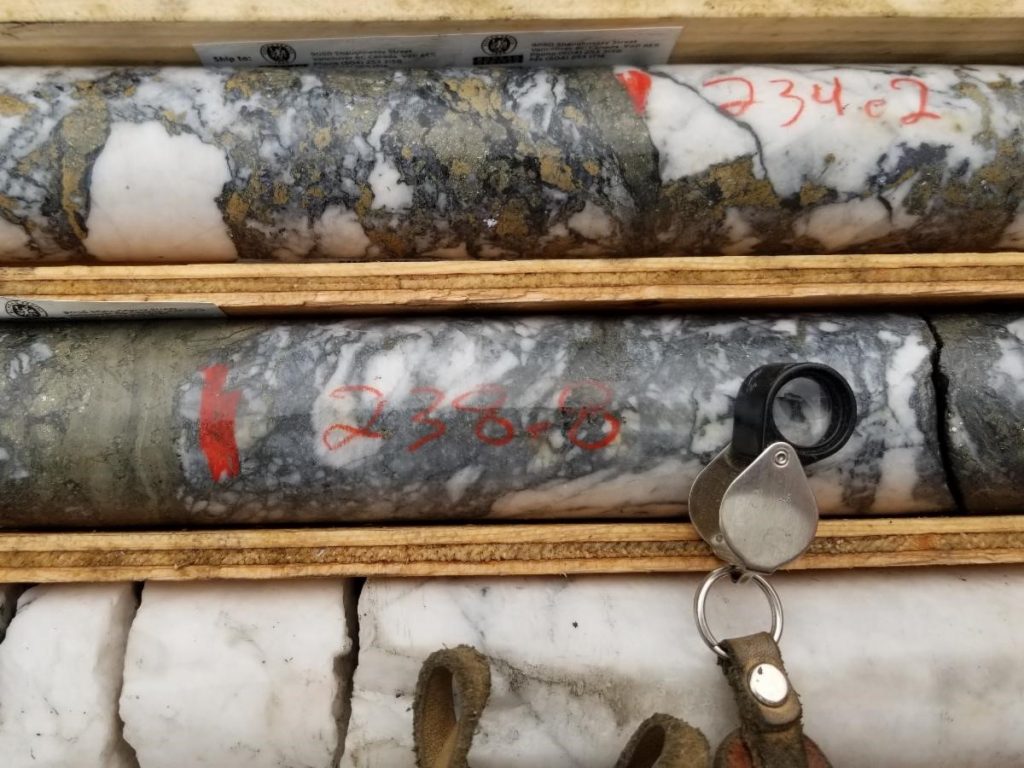 Drilling on Thor’s Ridge is a challenging process because of steep terrain and technicalities of the overburden resulting from the paleo-landslide.

The 2021 season’s inaugural drill hole (Thor-218, -450) on the Ridge Target was abandoned at a depth of 48.8m due to excessive bit wear. An assessment of the difficult ground conditions indicated that a landslide, clearly visible on Lidar imagery, was responsible for the difficult ground conditions. Subsequent deep penetrating electrical tomography mapping of the area confirmed the presence of a large conductive landslide that ranged in thickness from 30-35 m, fully concealing bedrock at the base of the landslide.

Once drilling methods were modified, a drill hole (Thor-219, -600) penetrated through the landslide and reached bedrock at a depth of 29.6 m. This hole intersected a new weakly mineralized quartz vein from 56.54 to 59.77 m (0.01% Cu, 0.16 % Pb, 0.57% Zn, 5.72 g/t Ag and 0.37 g/t Au). Of note was a fault on top of the quartz vein that contained slickensided pyrite. The hole emitted a pungent smell of hydrogen sulfide gas, and it is this geological teaser that led to the eventual discovery of the Thunder Zone under the paleo-landslide in hole Thor-220.

Despite intersecting only weak mineralization in the Ridge Target, Thor-219 was continued further into the underlying Blue Bell Zone, encountering it at 157.01–157.20 m. Historical underground sampling and previous Taranis drilling had already shown that the Blue Bell Zone “pinched-out” in this area. The assay results from the Blue Bell interval showed the characteristic high-grade of this zone (0.20% Cu, 0.55% Pb, 5.66% Zn, 118g/t Ag, and 0.67 g/t Au/0.19 m). This intercept demonstrates that despite a diminished environment for the hosting of a wide zone of mineralization in the northern terminus of Blue Bell, the metal-bearing hydrothermal fluids that deposited the metals did not wane during deposition.

Thor-220 (-900) was cased down through the landslide and entered bedrock at a depth of 30.78 m from the same setup as Thor-219. Shortly after entering bedrock the drill hole intersected Jowett Formation volcanic rocks (48.95–74.52 m) that exhibited prolific quartz veining accompanied by tetrahedrite, sphalerite, galena, and pyrite mineralization. This mineralization was the source of the hydrogen sulfide gas that was noted in Thor-219.

Implications of the Thunder Zone for Increasing Thor’s Mineral Resource

Taranis is confident that the Thunder Zone will be comparable to True Fissure, Great Northern, or Blue Bell, and that it is part of a repeating pattern that continues to the north-northwest. The Thunder Zone is a completely blind zone hidden under steep topography and an overlying paleo-landslide. Now that these features relative to the zone have been identified and mapped, following the Thunder zone and any subsequent zones in the sequence will be greatly simplified.

The Thor-220 intercept bears close resemblance to other drill holes in the existing deposit in terms of tenor, thickness, and mineralogy. It also establishes a repetitious pattern of mineralization which will simplify discovery of additional zones as exploration activities move under Thor’s Ridge. Thor-220 is the northernmost drill hole that was completed in the Thunder Zone, and also the northernmost drill hole ever drilled at Thor. Testing this zone moving further to the northwest is a high priority for future drilling.

While much exploration work remains in order to follow the Thunder Zone under Thor’s Ridge, there are indications the Thunder Zone extends for a considerable distance to the north-northwest. Previous surface sampling by Taranis at a location called ‘SIF North’ (located over 1 km to the northwest of the Thunder Zone) obtained gold values up to 0.60 g/t Au. Westmin Resources, who formerly explored in the vicinity of SIF North, also obtained gold values in trenching up to 3.85 g/t Au in the early 1980s. This gives Taranis high confidence that there is still a substantial amount of mineralization to be found under Thor’s Ridge and on the north side of the Silver Cup Anticline. In this area, the targets are hidden below surface under barren lithocap rocks of the Broadview Formation, and this would explain why they have not been previously discovered.

John Gardiner, President and CEO of Taranis states, “Thor is a large hydrothermal system that extends for upwards of 2.5 km in strike length, and it is now suspected to have all three parts of an intact hydrothermal system. Since acquiring this deposit in 2006, we have drilled over 250 holes and developed a good understanding of the ore controls and its genesis.

The Source is most likely a large intrusive body found under Broadview Creek, the Conduit is the Thor Fault Zone which obliquely crosscuts the Silver Cup Anticline, and finally the Trap is a lithology called the Jowett Formation lying under the Broadview Formation that is a tight caprock. While the Source part of this model remains to be tested with drilling for porphyry-type mineralization, it was the subject of further exploration activity in 2021 including ground geophysical surveys and surface sampling. This area, in addition to the newly discovered Thunder Zone, remain the prime areas of exploration that will contribute to Resource growth in 2022. Taranis is planning a new NI 43-101 Resource Estimate that will replace and significantly expand on its outdated 2013 maiden Resource estimate.

The Silver Cup Anticline hosts other deposits in the area, but what makes Thor so interesting is its elevated gold content within the main polymetallic sulfide deposit but also in high-grade monometallic gold zones such as SIF. We now know that the Thor deposit occurs at the junction of a major NNW-trending shear zone and the Silver Cup Anticline. It appears that an underlying buried intrusive Source body has emplaced precious and base metals at that structural junction.

Taranis has a unique approach to exploration. First and foremost, permitting and other factors necessitate that exploration in British Columbia be ‘surgical’ in its approach. Key to this approach is a reliable geological model that is testable. Ensuring that each and every drill hole counts towards an expanded Resource pays dividends to our shareholders through cost-conscious discovery with a high success rate. This approach by necessity weighs heavily on experience, long-term planning, and state-of-the-art exploration methods.”

Exploration activities at Thor were overseen by John Gardiner (P. Geol.) who is a Qualified Person under the meaning of Canadian National Instrument 43-101. Drill core is logged and sawed onsite, and one-half is retained for reference and further analytical work including specific gravity determinations. The remaining half core is delivered by Taranis via courier to Bureau Veritas Commodities Canada Ltd. (“Bureau Veritas”) in Vancouver, British Columbia. Bureau Veritas is an ISO 9001 certified analytical laboratory. Taranis inserts standards every 10th sample for quality control in addition to the stringent internal checks completed at Bureau Veritas. Samples are dried, crushed, split and pulverized at the Vancouver location, and analyzed for silver, copper, lead, zinc and related trace elements done by modified aqua regia digestion with ICP finish. Gold is analyzed using a 30-gram fire assay with ICP finish.

For additional information on Taranis or its 100%-owned Thor project in British Columbia, visit www.taranisresources.com