Talisker Intersects 1.17 g/t Gold over 106.75 Metres of Intrusion-Hosted Mineralization in the Pioneer Block at Bralorne

Talisker Intersects 1.17 g/t Gold over 106.75 Metres of Intrusion-Hosted Mineralization in the Pioneer Block at Bralorne

Talisker Resources Ltd. (TSX: TSK) (OTCQX: TSKFF) is pleased to announce complete and partial drill assay results from its ongoing 100,000 metre drill program at the Bralorne Gold Project in British Columbia (see Figure 1).  Today’s release is headlined by a 106.75 metre interval of near-surface bulk-tonnage gold mineralization within the Pioneer Block that returned an average grade of 1.17 g/t gold in hole SB-2021-026 (see Figure 1); assay results are also included for holes SB-2021-022 and SB-2021-029 drilled within the Pioneer Block. This near-surface gold mineralization at Pioneer is hosted in a coarse-grained felsic intrusive and is characterized by excellent grade consistency (see Table 2).  More drilling is required to determine the lateral and vertical extents and geometry of the felsic intrusive hosting these broad zones of near-surface gold mineralization at Pioneer. With five drill rigs operating on site, the Company expects to receive more assay results from both the Charlotte Zone (0 to 350m) and the High-Grade Zone (350 to 750m) soon.

The 1.17 g/t gold over 106.75m intersection in hole SB-2021-026 drilled at the Pioneer Block represents the broadest and most consistent interval drilled at the Pioneer Block to date, and supports the Company’s interpretations that near-surface bulk tonnage gold mineralization extends well beyond the Charlotte Zone to the northwest (see Figure 1 and 2). Importantly, the grade profile through this 106.75m intersection, in addition to the broad zones of mineralization intersected in holes SB-2021-022 and SB-2021-029, shows excellent consistency; hole SB-2021-26 also includes several narrower zones of high-grade gold mineralization highlighted by 67.80 g/t gold over 0.55m.

The Pioneer zone was periodically mined between 1945 and 1965 with production from eight veins. The coarse-grained felsic intrusive (CGFI) hosting these broad zones of gold mineralization at Pioneer is a vertical intrusive body that outcrops at surface. The CGFI is intruded by fine-grained felsic and intermediate-mafic dykes (both is which also host gold mineralization). The intrusive body is bound by a basaltic unit to the northeast and the Cadwaller Fault to the southwest; however, the lateral and vertical extents and geometry of the CGFI remains unknown due to limited drilling.  An additional hole is planned “up-plunge” of hole SB-2021-26 to determine the proximity of gold mineralization relative to the surface. Gold mineralization is characterized by a high-density network of quartz veins interspersed with larger veins between 0.20m to 1m wide that include crack and seal textures and minor pyrite and arsenopyrite and periodic occurrences of visible gold (see Table 1).

Terry Harbort, President and CEO of Talisker commented, “As drilling at the Charlotte Zone continues to define near-surface, bulk tonnage gold mineralization, we are pleased to see similar near-surface gold mineralization at the Pioneer Block, located over 2km to the southeast. This follows the discovery of near-surface gold mineralization at the King Block (see press release of April 7, 2021). We are particularly impressed by the grade consistency at Pioneer, and drilling is planned to determine the lateral and vertical extents of this gold-mineralized intrusive body.  Together with the King Block, we have now identified three zones of near-surface gold mineralization distributed over a 3.8km strike length, with areas between the three zones still to be tested. With five drill rigs operating, we have a large backlog of samples at the lab and we expect this backlog to be reduced as the assay lab returns to normal operations. We remain on track to deliver our initial mineral resource estimate from Bralorne in 2022.”

SB-2021-029 – Pioneer BlockComplete preliminary assay results have been received for this hole.

Talisker is a junior resource company involved in the exploration of gold projects in British Columbia, Canada. Talisker’s projects include the Bralorne Gold Complex, an advanced stage project with significant exploration potential from a historical high-grade producing gold mine as well as its Spences Bridge Project where the Company holds ~85% of the emerging Spences Bridge Gold Belt and several other early-stage Greenfields projects. With its properties comprising 282,403 hectares over 258 claims, three leases and 198 crown grant claims, Talisker is a dominant exploration player in the south-central British Columbia. The Company is well funded to advance its aggressive systematic exploration program at its projects.

The technical information contained in this news release relating to the drill results at the Bralorne Gold Project has been approved by Leonardo de Souza (BSc, AusIMM (CP) Membership 224827), Talisker’s Vice President, Exploration and Resource Development, who is a “qualified person” within the meaning of National Instrument 43-101, Standards of Disclosure for Mineral Projects.

Drill core at the Bralorne project is drilled in HQ to NQ size ranges (63.5mm and 47.6mm respectively). Drill core samples are minimum 50 cm and maximum 160 cm long along the core axis. Samples are focused on an interval of interest such as a vein or zone of mineralisation.  Shoulder samples bracket the interval of interest such that a total sampled core length of not less than 3m both above and below the interval of interest must be assigned. Sample QAQC measures of unmarked certified reference materials (CRMs), blanks, and duplicates are inserted into the sample sequence and make up 9% of the samples submitted to the lab for holes reported in this release.

Sample preparation and analyses is carried out by ALS Global in North Vancouver, British Columbia, Canada and SGS Canada in Burnaby, British Columbia, Canada. Drill core sample preparation includes drying in an oven at a maximum temperature of 60°C, fine crushing of the sample to at least 70% passing less than 2 mm, sample splitting using a riffle splitter, and pulverizing a 250 g split to at least 85% passing 75 microns (ALS code PREP-31 / SGS code PRP89).

Gold assay technique (ALS code Au-AA26 / SGS code FAA50V10) has an upper detection limit of 100 ppm. Any sample that produces an over-limit gold value via the gold assay technique is sent for gravimetric finish (ALS method Au-GRA22 / SGS method GO_FAG50V) which has an upper detection limit of 1,000 ppm Au. Samples where visible gold was observed are sent directly to screen metallics analysis and all samples that fire assay above 1 ppm Au are re-analysed with method (ALS code Au-SCR24 / SGS code GO_FAS50M) which employs a 1kg pulp screened to 100 microns with assay of the entire oversize fraction and duplicate 50g assays on the undersize fraction. Where possible all samples initially sent to screen metallics processing will also be re-run through the fire assay with gravimetric finish provided there is enough material left for further processing. 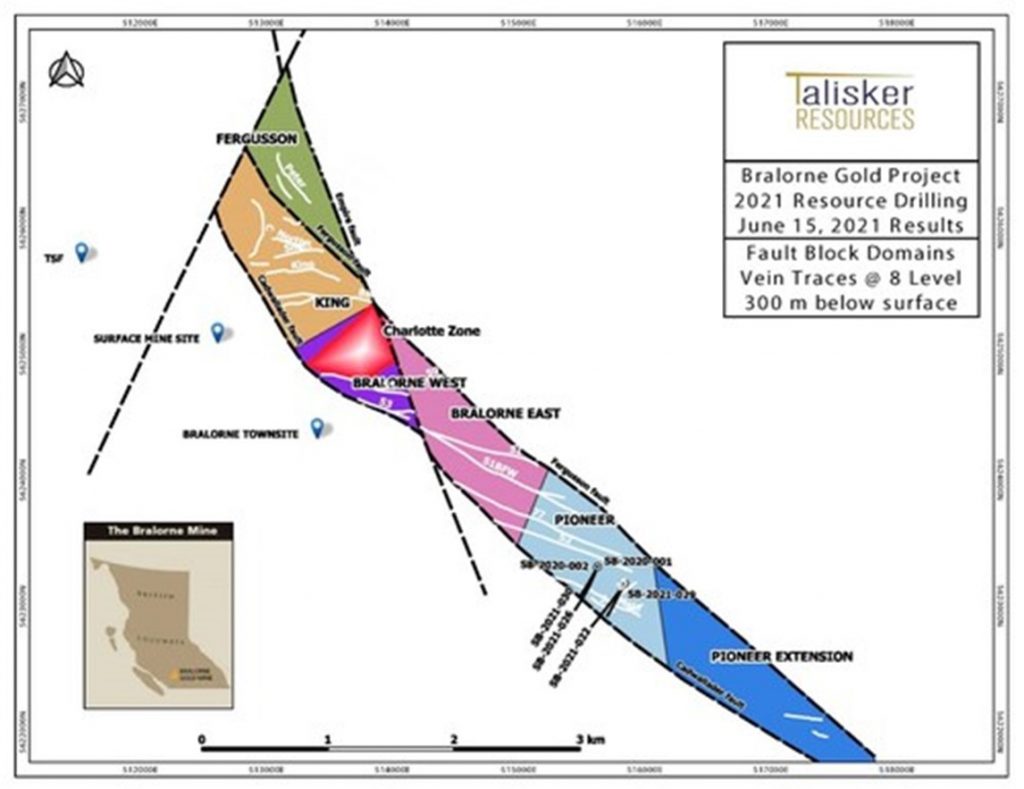 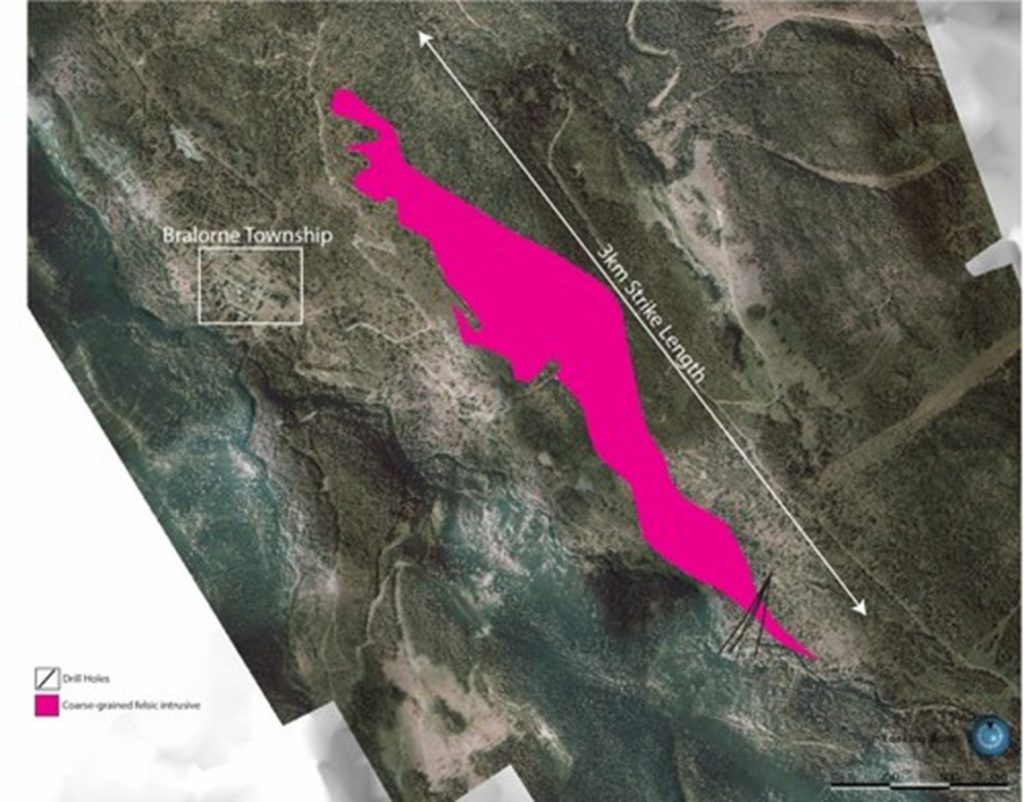 Figure 2: Cross-section through the Pioneer Block of the Bralorne Deposit showing major intersections within hole SB-2021-026, as well as downhole observations of visible gold in holes SB-2021-030 and SB-2021-040, assay results of which have yet to be released. (CNW Group/Talisker Resources Ltd) 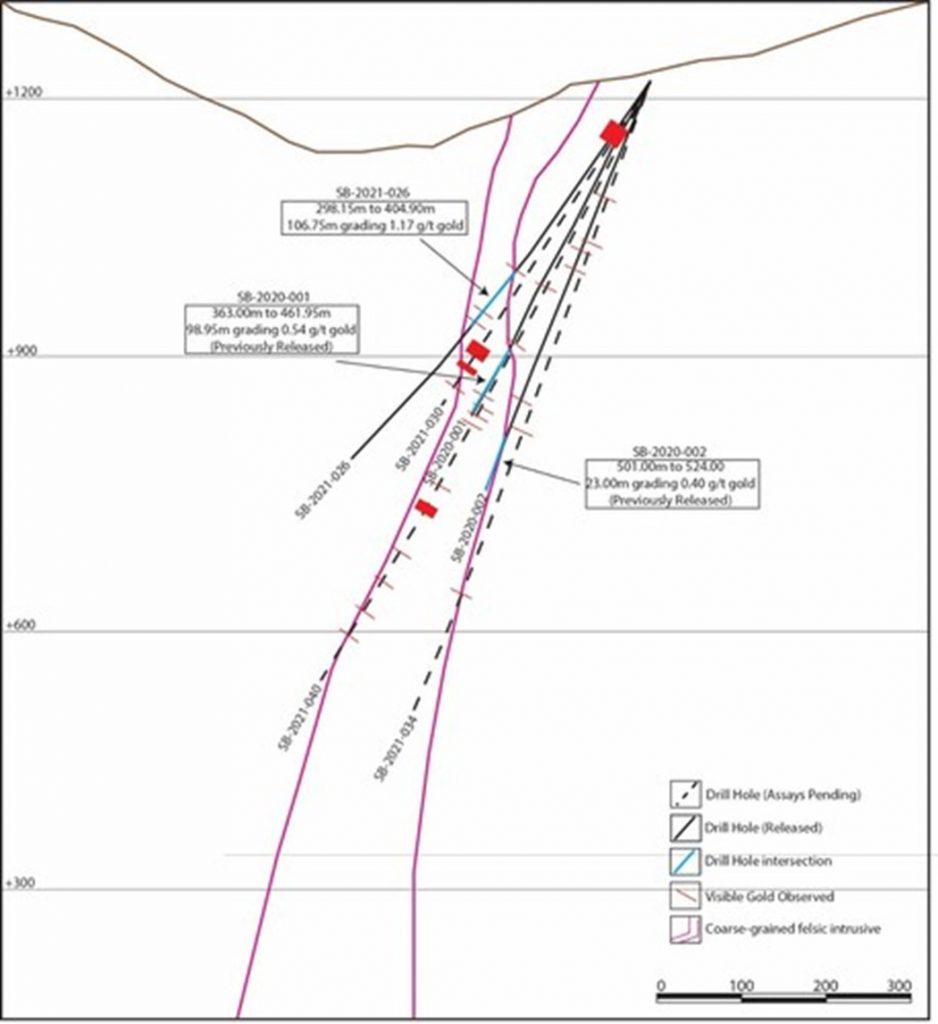