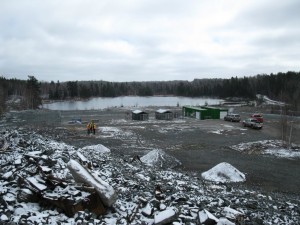 Takara Resources Inc. (TSX-V:TKK) is pleased to announce the closing of the transaction with Gold Bullion Development Corp. (TSX-V:GBB) to acquire certain properties of Gold Bullion as per the press releases dated April 13, 2015 and May 4, 2015. The subject properties located in Ontario have now been transferred to Takara through the acquisition by Takara of Gold Bullion’s wholly owned subsidiary, Castle Silver Mines Inc. CSM owns a 100% interest in the 3,300-hectare Castle Silver Mine property, a past silver producer located near the northern Ontario community of Gowganda, 85 kilometres northwest of the historic Cobalt silver mining camp.

Pursuant to the terms of the share purchase agreement dated April 13, 2015 (amended May 4, 2015) Takara has acquired all of the issued and outstanding common shares of CSM from Gold Bullion in exchange for 10,000,000 units of Takara to be issued in equal amounts of 2,500,000 Units with the first issuance on closing of the transaction and the remaining issuances on each anniversary from the closing date for the next three years. Each Unit is comprised of one common share in the capital of Takara and one common share purchase warrant. Each warrant entitles the holder to acquire one common share of Takara on or before twelve months from the date of issuance of the Units at an exercise price of $0.10 per common share. Pursuant to applicable securities laws, the common shares and warrants will be subject to a four month hold period from the date of issuance.

Gold Bullion has agreed, subject to TSX Venture Exchange approval, to distribute pro rata, the Units received in the transaction, to Gold Bullion shareholders of record subject to a regulatory four-month holding period commencing from the date of issuance of the Units. Pursuant to the terms of the Share Purchase Agreement, both parties have agreed that Takara will not be obligated to issue any Units if such issuance results in Gold Bullion holding more than 20% of the then issued and outstanding common shares in the capital of the Company. Any exception would require Takara to first obtain shareholder approval. For greater certainty, the parties also agree that Takara may issue the Units in smaller amounts and as such delay the scheduled issuance of the Units to avoid the result that the issuing of such Units would create a new “control person” as per TSX Venture Exchange policies and the definition of the term contained therein.

Further, as part of the transaction and as a condition of the Share Purchase Agreement, Takara will issue 400,000 common shares to settle certain outstanding debt of $20,000 in management fees owed to a former Director of Takara. In addition, Takara has previously completed a non-brokered private placement in three tranches consisting of an aggregate of 4,000,000 units at a price of $0.05 per PP Unit for total proceeds of $200,000.00 as previously announced May 20, 2015, June 23, 2015 and July 31, 2015. Each PP Unit consists of one common share in the capital of the Company and one common share purchase warrant. Each warrant entitles the holder to purchase one common share at a price of $0.10 per share for a period of two years from the date of issuance. Finder fees payable consisted of $7,577.50 in cash and the issuance of 147,000 finder’s warrants.

Board and Management of Takara Resources Inc.

Technical information in this news release has been reviewed and approved by Claude Duplessis, Eng. PEO a consulting engineer with GoldMinds Geoservices Inc., from Quebec City, Quebec, Canada, a Qualified Person as defined in National Instrument 43-101 – Standards of Disclosure for Mineral Projects.

With the addition of the historic high-grade Castle Silver properties, the new focus will be on the exploration and development of the 22 million ounce past producer. A recent drill hole CA-108, returned 188.8 ounces of silver per tonne over 3.09 metres. A NI-43-101 Technical Report has also been completed for the Castle properties. The CSM camp features structures, water, year round road access and diesel power. Takara also controls 19,100 ha of consolidated claims over a 3.5 km strike including multiple uranium showings in the Athabasca Basin, one of the richest regions for Uranium discovery and development in the world.