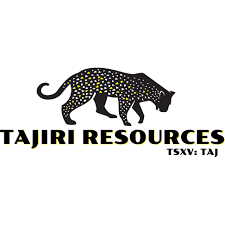 The two high grade intersections are located on a sub-parallel structure to and approximately 1,000m north of Goldstar (Figure 2).  The 2m @ 62.4 g/t Au is situated on a major contact, which can be traced for over 15km, between mafic volcanic rocks and fine grained, variably graphitic, turbiditic sediments.   This mineralization is completely open down dip and along strike to the northwest and strike extensions are currently being trenched.  Immediately to the southwest the contact has been tested by 4 trenches over a strike length of 400m and has been demonstrated to host persistent but low-grade gold mineralization- peak value 2m @ 0.9 g/t.  Furthermore at between 4 and 8 kilometres southeast within the Company’s wholly owned Kaburi project the same contact is associated with significant drill intersections (e.g. 22m @ 2.7g/t Au) and soil geochemical anomalism of between 100- 3,450ppb Au.

Significantly, the high-grade intersection reported today is associated with a pronounced mapped strike flexure in the sediment-volcanic contact from N-S to NW (Figure 2) related to a NW striking, 5-20m wide zone of shearing mapped in trenches proximal to the contact in this area.  In addition, the observed dip of the contact steepens from 60˚ to 85˚ over a distance of 30m between TR001 & TR004A and the contact exhibits a minor flexure which juxtaposes the shear zone and sediment-volcanic contact in Trench 001.  As such the proximity of the contact to a substantial shear zone and the change in “architecture” of the contact into what appears to be the preferred strike orientation of gold deposits in the district (e.g. Smarts, Hicks) can be viewed as favorable for extending this high grade zone.

In detail the 2m @ 62.4g/t is hosted by a zone of high strain and shear fabric development with tight metre scale folding in the sediments with weaker shear fabric development, strong quartz-carbonate veining of up to 30cm thickness and sulphidation (visible as limonite staining) within “doleritic” mafic volcanics at the contact (Figure 3).    The zone hosting the 1m @ 16.2g/t Au, 10m west of the sediment-mafic contact mineralization occurs at the contact of two basalt phases a porphyritic-fragmental basalt to the west and the same “doleritic” phase which is in contact with the sediments.  This contact between two basalt phases presents as a highly weathered zone of powdery pervasively limonite-stained clay, fine silica and black sand with abundant 50% smokey to milky quartz carbonate stockwork veining of centimetric scale (Figure 4).

Finally, the 2m @ 62.4 g/t interval was initially assayed at Act Labs Guyana Inc. by conventional 30-gram fire assay and checked by a 500-gram screen fire assay.  The conventional fire assay returned 61.9 g/t Au whereas the screen fire assay reported 62.4 g/t Au.  Gold distribution was approximately equal between fine and coarse fractions with 56% of the gold in the sample reporting to the minus 150-micron (-100 mesh) size fraction which assayed 46.0 g/t and 44% to the +150 micron category which assayed at 179.4 g/t.

“This is our third announcement related to ongoing due diligence assessment at Epeius and with each we have advanced from some early auger hits (Dec 7, 2020) through some “warm-up” trench results (Jan 13-2021) to today’s high grade hit in the space of 3 months.  I am particularly encouraged in the co-incidence of the two highest grade intervals so far encountered by our program with the change in strike of a regional scale known mineralised contact from N-S to NW and its co-incidence in this area with a significant shear zone.   In the wider region the preferred strike elongation of gold deposits such as Hicks, Smarts, Goldstar, Ohio creek is NW (~ 310˚).  Furthermore, a general alignment of topographic features (small ravines and slope breaks) is highly suggestive that the strike change associated with mineralisation could persist for up to 1,000m to the NW the direction in which mineralization lies open.”

The Qualified Person under National Instrument 43-101 – Standards of Disclosure for Mineral Projects for this news release is Dominic O’Sullivan a geologist, member of the AusIMM, Executive Chairman of Tajiri and who has reviewed and approved its contents.

Tajiri Resources Corp. is a junior gold exploration and development Company with exploration assets located in two of the worlds least explored and highly prospective greenstone belts of Burkina Faso, West Africa and Guyana, South America. Lead by a team of industry professionals with a combined 100 plus years’ experience the Company continues to generate shareholder value through exploration. 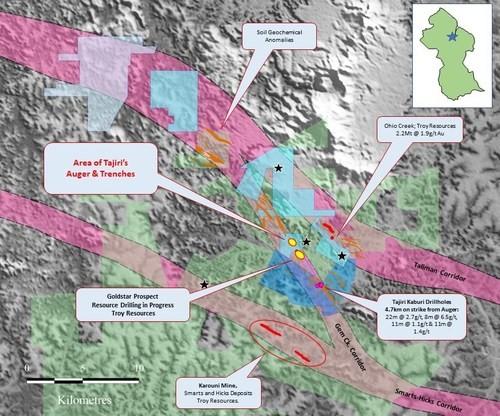 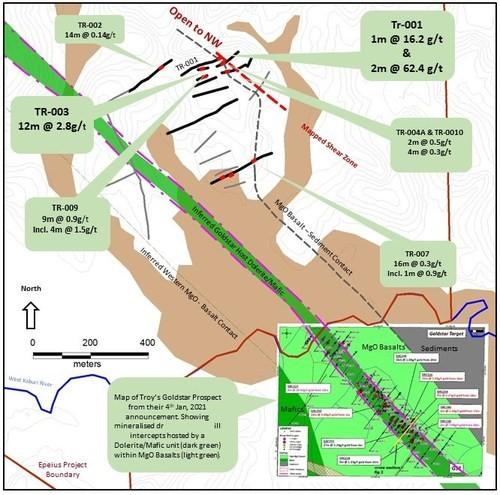 Figure 2: Results and Geology of current trenching program at Epeius. Showing location of High grade Intersections of 2m @ 62.4g/t and 1m @ 16.2g/t at the north eastern corner of the presently trenched area. Note mapped mafic volcanic -sediment contact and significant change in strike from N-S to NW and co-incidence of the contact with the mapped NW striking shear zone. Trenches for which result have been received – black, trenches for which results are awaited – grey. (CNW Group/Tajiri Resources Corp.) 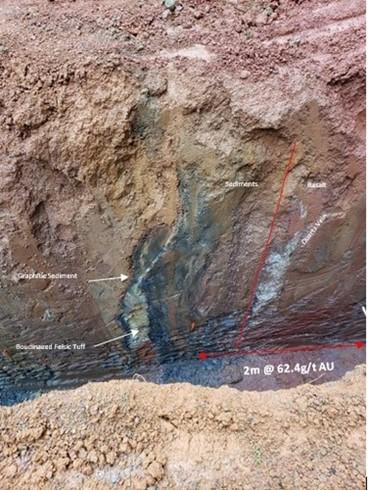 Figure 3 Showing the contact zone in Trench001 which returned 2m @ 62.4g/t Au as indicated by the double arrowed red line located between the central orange sample tag and yellow sample tag at the extreme left of the image.       Graphitic layers within the sediment show as black sooty areas and doleritic basalt shows predominately as the maroon colours to the left. Note steep to near vertical dip of the contact (thin red line) which 30m on strike to the southwest at approximately 60˚ to the east and the substantial quartz veining (white) within both basalt and sediments at the contact. Image shows approximately four metres view width with distance between sample tags being 2m. (CNW Group/Tajiri Resources Corp.) 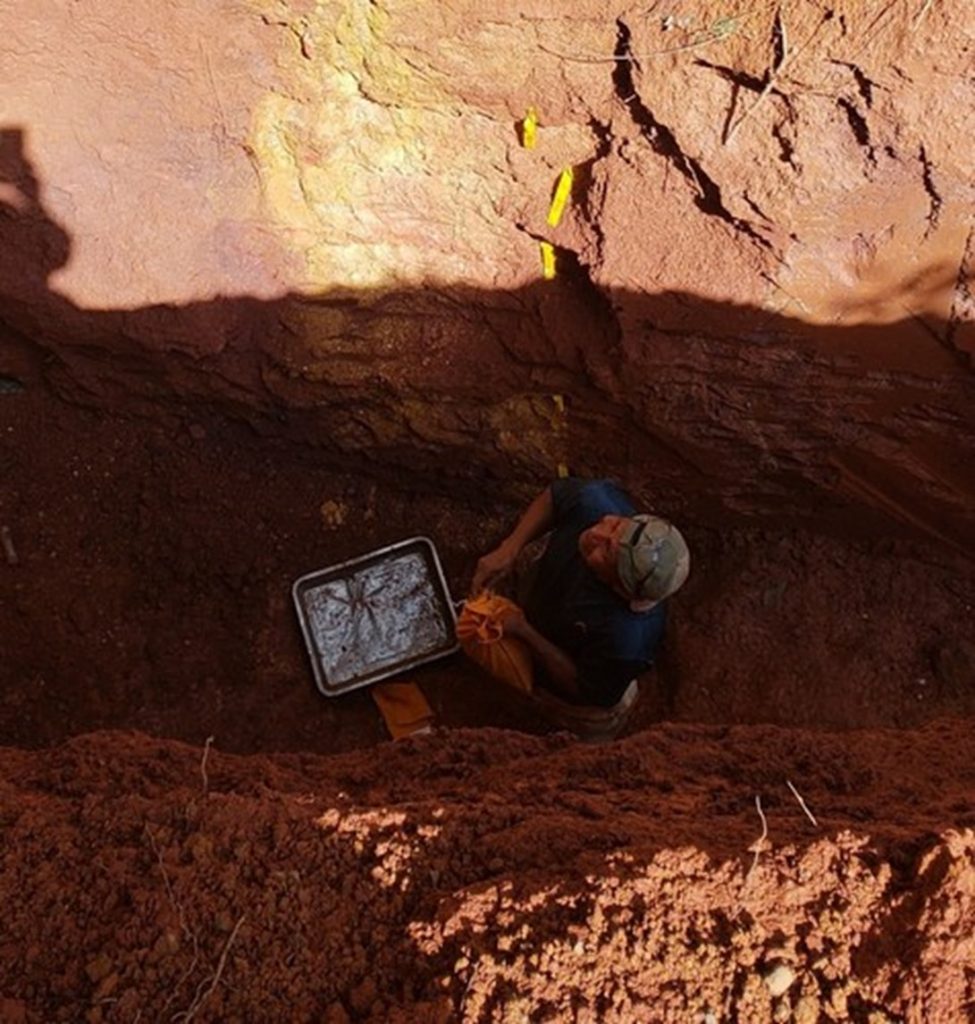 Figure 4 Showing the intersection of 1m @ 16.2g/t Au. Image is located 10m west along Trench 001 from previous figure.    Note pervasive limonite staining (yellow) after sulphide alteration at the contact between two basalt phases:  a porphyritic to fragmental basalt to the right and a more “doleritic” massive and crystalline textured basalt which is in contact with the sediments. (CNW Group/Tajiri Resources Corp.)