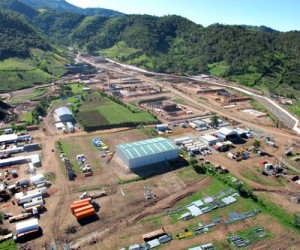 Tahoe Resources Inc. (TSX:THO)(NYSE:TAHO) is pleased to announce that it has commenced shipping silver-bearing metals concentrates to smelters from its 100 percent owned Escobal mine in Guatemala. The first container of bagged concentrate was placed on a ship on October 15.

“This small concentrate shipment represents a tremendous milestone for the Company,” said Tahoe President and CEO Kevin McArthur. “The Guatemalan team is delivering on the promises made in 2010 to responsibly construct and operate a world-scale silver mine within three years of design, permitting and financing.”

Initial mill commissioning began in September. Tahoe expects to ramp up production to 3500 tonnes per day (tpd) by year-end and to be in full production by early 2014. The Company is currently developing the framework to determine when full production is achieved.

“Once we have reached that milestone, we will turn to the next important task–stakeholder returns through Guatemala federal taxes, a strong community-based royalty and dividends to our shareholders,” added Mr. McArthur.

As of the end of the third quarter, engineering, procurement and construction of the Escobal project was 99 percent complete and the underground mine was ready to produce at the rate of 3500 tpd. Cash and cash equivalents on September 30, 2013 stood at $39.2 million, which the Company estimates to be adequate to carry the mine through to production.

The mine is projected to produce 20 million ounces of silver in its first full year of production. The above-ground stockpile contains 97,250 tonnes of mill-feed averaging 487 grams of silver per tonne. Ten mining areas, or stopes, are currently available for mining operations, and an additional 10 stopes are in final development, averaging 41,000 tonnes at a grade of 550 g/t Ag. Primary development to support more than five years of production has been completed.

To date, a total of 10,000 tonnes have been fed through the process plant, and a series of de-bottlenecking, training and completion testing programs have been underway since September. All major facilities other than the backfill plant have been tested and are operating as expected. Backfill operations are expected to commence later in the quarter after the first underground stope is completed.

Tailings filtration has been a successful component of the start-up, and filtered tailings are being placed in the Phase One dry stack tailings disposal site. Tailings are compacted in-place, and will be concurrently reclaimed as the mining project advances.

Tahoe has reached agreement on commercial terms with several smelters, all of which are interested in long-term contracts. Terms are confidential at this time, but they are consistent with those indicated in the May 2012 Preliminary Economic Assessment analysis. It is still too early to judge metallurgical response during this trial period, and an update will be provided once the plant reaches its full throughput rate. The project remains on schedule and budget.

Tahoe’s strategy is to develop the Escobal project into a profitable mining operation and to position itself as a leading silver producer with high quality, low cost assets in the Americas. Tahoe is a member of the S&P/TSX Composite and TSX Global Mining indices and the Russell 3000 on the NYSE. The Company is listed on the TSX as THO and on the NYSE as TAHO.