1Note that the host structures are interpreted to be steeply dipping and true widths are unknown at this time. Infill veining in secondary structures with multiple orientations crosscutting the primary host structures are commonly observed in drill core which could result in additional uncertainty in true width. Composite intervals reported carry a minimum weighted average of 1 g/t Au diluted over a minimum core length of 2m with a maximum of 2m consecutive dilution. Included high-grade intercepts are reported as any consecutive interval with grades greater than 10 g/t Au. Grades have not been capped in the averaging and intervals are reported as drill thickness.

VP of Exploration Melissa Render stated: “Our drilling is demonstrating that the corridor surrounding the Appleton Fault Zone is prolifically mineralized via a series of interconnected structures and vein sets that form a webbing shown to occur within a few hundred-meter-wide damage zone on either side of the of the primary, crustal-scale fault. These veins are not constrained by orientation or stratigraphy, which greatly increases the amount of strike length and the variety of lithological environments to explore. In specific areas, blow outs of gold mineralization occur where veins and structures cross paths, as illustrated at Keats Main, Lotto, and Golden Joint. The complexity and extent of the system provides an opportunity for discovery in a very large volume of prospective host stratigraphy.

We have now ramped up to 14 drills to continue to accelerate our exploration and rate of discovery. Today’s news outlines an area roughly equal to the strike length of Keats, connecting two zones together that were previously separate. Drilling in this area remains sparse and shallow, with several priority assays pending.”

Mineralization at the Queensway Project is hosted by a fold-thrust sequence of northeast-striking, steeply dipping turbiditic sedimentary rocks deposited and deformed during the closure of the Iapetus Ocean and subsequent continent-continent collision. During this prolonged period of continued shortening, at least two regional-deformation zones developed and include the Appleton and JBP fault zones. The AFZ is interpreted to be a significant, deep-seated thrust fault that strikes southwest across the full 100km+ length of the property and is likely the main conduit for the gold mineralizing fluids, much like the Cadillac-Larder Lake Fault Zone in the Abitibi.

As a result of progressive deformation, the brittle host stratigraphy developed an extensive network of gold-bearing fault zones enveloping the AFZ, the extents of which are not yet known. Higher-grades and widths of gold mineralization occur in areas where there was greater mineralizing fluid flow such as at structural intersections, at dilational openings within fault structures, and along lithological contacts where breakage occurs due to rheological differences in the compressional strength of contrasting sedimentary rock units. A significant amount of the high-grade gold mineralization is interpreted to be epizonal in nature, having been emplaced when tectonic movements resulted in the explosive tapping of deep gold-rich magmatic fluids that rapidly precipitated gold as they migrated towards surface.

The Keats-Baseline Fault Zone is an extensive brittle fault zone that lies to the east of the AFZ and runs slightly oblique to it and has an east-northeast strike (N55°E) and dips to the southeast at approximately 60°. This fault forms an extensive damage zone that is discordant to the stratigraphy, and it controls the development of a complex network of brittle, high-grade gold vein arrays that are epizonal in character. Gold mineralization is characterized by the presence of quartz-carbonate veins with vuggy, stylolitic and/or brecciated textures which often contain trace amounts of arsenopyrite, chalcopyrite, boulangerite or pyrite, and which are associated with a NH4 muscovite alteration. A variety of fault and vein orientations have been encountered within and surrounding the KBFZ, forming a complex network of high-grade vein splays bifurcating from the KBFZ and the AFZ. Cross-cutting the Keats Main zone and forming important constituents of the KBFZ network are several conjugate brittle faults that are gold-rich and that create lenses of high-grade gold mineralization. Examples of such structures are the Umbra, Penumbra, Solstice, Eclipse, and 421 zones (Figure 1). The Umbra and Penumbra structures strike approximately north-south and have been intersected over a strike length of approximately 630m and are interpreted to play an important role for concentrating high-grade gold in the Keats North region.

Table 2: Summary of composite results reported in this press release for Keats North

1Note that the host structures are interpreted to be steeply dipping and true widths are unknown at this time. Infill veining in secondary structures with multiple orientations crosscutting the primary host structures are commonly observed in drill core which could result in additional uncertainty in true width. Composite intervals reported carry a minimum weighted average of 1 g/t Au diluted over a minimum core length of 2m with a maximum of 2m consecutive dilution. Included high-grade intercepts are reported as any consecutive interval with grades greater than 10 g/t Au. Grades have not been capped in the averaging and intervals are reported as drill thickness.

Table 3: Details of drill holes reported in this press release

Approximately 56% of the planned 400,000m program at Queensway has been drilled to date with ~28,000m of the core still pending assay results. Fourteen (14) core rigs are currently operating meeting New Found’s targeted drill count for Q2.

True widths of the intercepts reported in this press release have yet to be determined and further exploration is required. Infill veining in secondary structures with multiple orientations crosscutting the primary host structures are commonly observed in drill core which could result in additional variability in true width. Assays are uncut, and composite intervals are calculated using a minimum weighted average of 1 g/t Au diluted over a minimum core length of 2m with a maximum of 2m consecutive dilution. Included high-grade intercepts are reported as any consecutive interval with grades greater than 10 g/t Au.

All drilling recovers HQ core. Drill core is split in half using a diamond saw or a hydraulic splitter for rare intersections with incompetent core.

A professional geologist examines the drill core and marks out the intervals to be sampled and the cutting line. Sample lengths are mostly 1.0 meter and adjusted to respect lithological and/or mineralogical contacts and isolate narrow (<1.0m) veins or other structures that may yield higher grades. Once all sample intervals have been chosen, photos of the wet and dry core are taken for future reference.

Technicians saw the core along the defined cut-line. One-half of the core is kept as a witness sample and the other half is submitted for crushing, pulverizing, and assaying. Individual sample bags are sealed and placed into shipping pails and/or nylon shipping bags, sealed and marked with the contents.

The entire sample is crushed to approximately 70% passing 2 mm. A 3,000-g split is pulverized. “Routine” samples do not have visible gold (VG) identified and are not within a mineralized zone. Routine samples are assayed for gold by 30-g fire assay with an inductively-couple plasma spectrometry (ICP) finish. If the initial 30-g fire assay gold result is over 1 g/t, the remainder of the 3,000-g split is screened at 106 microns for screened metallics assay. For the screened metallics assay, the entire coarse fraction (sized greater than 106 microns) is fire assayed and two splits of the fine fraction (sized less than 106 microns) are fire assayed. The three assays are combined on a weight-averaged basis.

Samples that have VG identified or fall within a mineralized interval are automatically submitted for screened metallic assay for gold.

Drill program design, Quality Assurance/Quality Control and interpretation of results are performed by qualified persons employing a rigorous Quality Assurance/Quality Control program consistent with industry best practices. Standards and blanks account for a minimum of 10% of the samples in addition to the laboratory’s internal quality assurance programs.

New Found’s quality control program also includes submission of the second half of the core for approximately 5% of the drilled intervals. In addition, approximately 1% of sample pulps for mineralized samples are submitted for re-analysis to a second ISO-accredited laboratory for check assays.

The Company does not recognize any factors of drilling, sampling or recovery that could materially affect the accuracy or reliability of the assay data disclosed.

New Found holds a 100% interest in the Queensway Project, located 15km west of Gander, Newfoundland, and just 18km from Gander International Airport. The project is intersected by the Trans-Canada Highway and has logging roads crosscutting the project, high voltage electric power lines running through the project area, and easy access to a highly skilled workforce. The Company is currently undertaking a 400,000m drill program at Queensway, now approximately 56% complete. The Company is well funded for this program with cash and marketable securities of approximately $77 million as of August 2022. 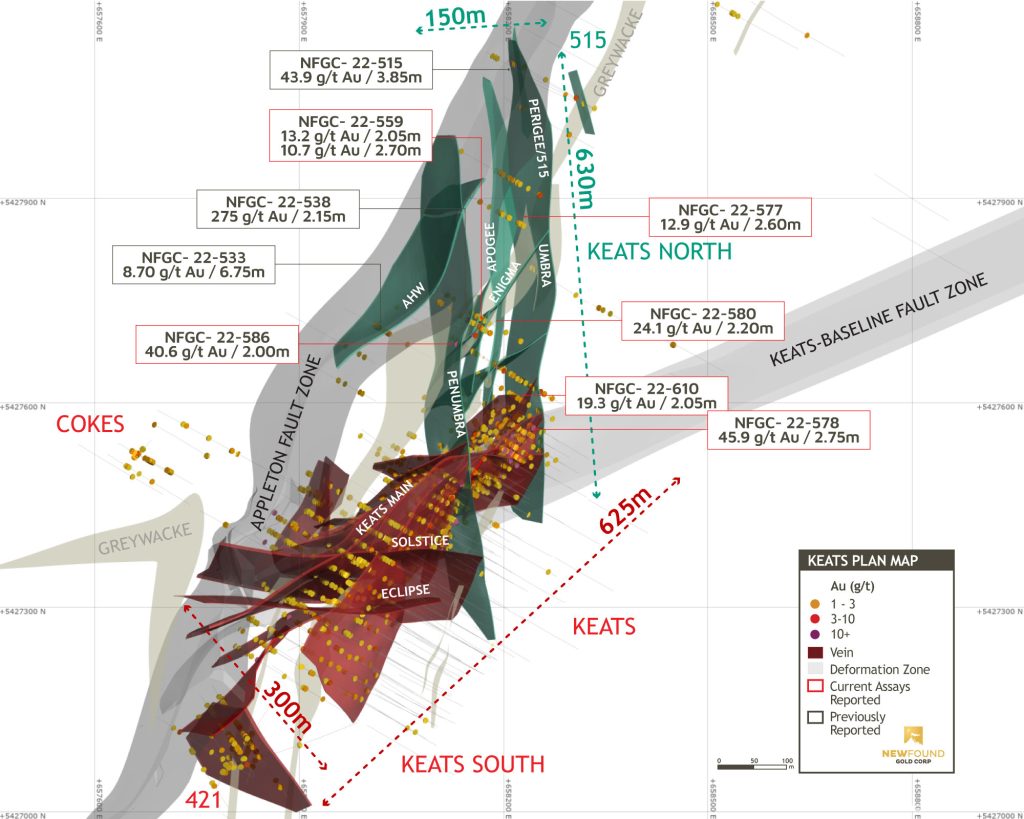 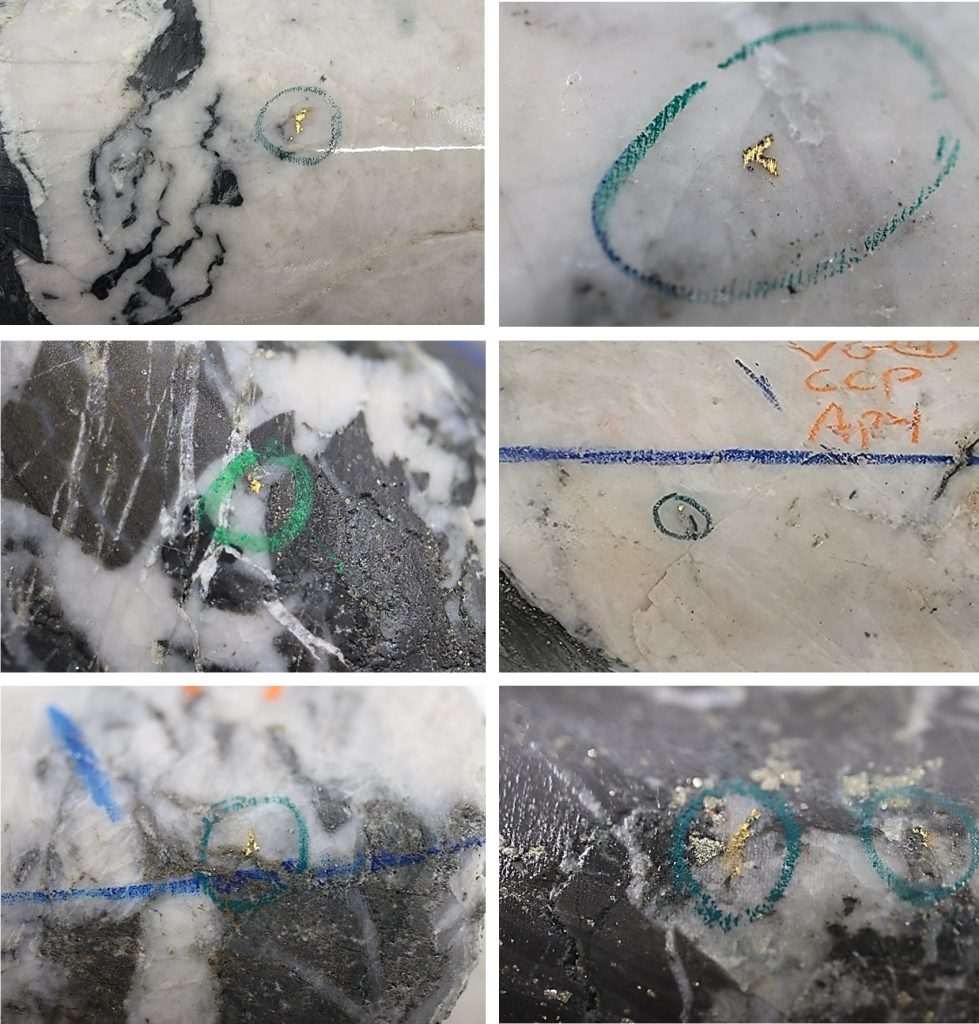