Chris Jordaan, President and CEO of Superior Gold stated: “We are extremely pleased to report a fourth consecutive quarter of improving production at our Plutonic Gold Operations.  Our second quarter production of 19,356 ounces, represents a 10% quarter-over-quarter and 28% year-over-year increase (Figure 1).  The strategic projects and operational initiatives that we put in place last year have resulted in a steady improvement in our performance as we continue to target an average underground stope grade in excess of 3.0 g/t gold as well as increase our surface grades by re-commencing open pit mining.

We continue to advance the strategic projects necessary to reposition Plutonic for sustainable, long term success. These projects include the resumption of open pit mining with mining at Plutonic East commencing on schedule during the second quarter.  The higher-grade open pit feed in conjunction with opening new high-grade underground mining fronts is expected to result in a continued improvement in our grade profile moving forward.  Over the course of the first half of the year, we have provided a number of important exploration updates that continue to point towards the identification of higher-grade stopes on the operational front in the near future. Ongoing geological initiatives have improved our understanding of the mineralization at Plutonic and specifically the northwest trending faults that control the concentration of higher-grade gold mineralization.

These operational improvements plus our improved understanding of the mineralization at Plutonic, combined with the full repayment of our gold loan during the quarter, will result in a significant improvement in our ability to generate free cash flow over the course of 2021 and beyond.”

The Company expects to release its complete financial and operating results for the second quarter in August 2021.

Preliminary production details are summarized in the table below. 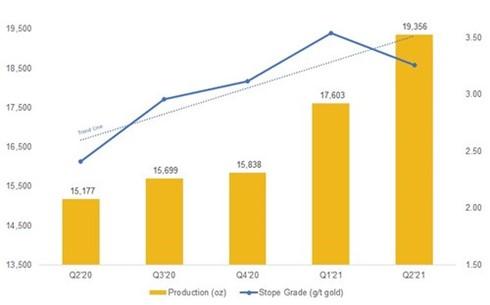 As part of the Company’s strategy to expand production and fully utilize the existing infrastructure at the Plutonic Gold Operations, work continued during the second quarter of 2021 on optimizing several potential open pit sources and finalizing resources and scheduling. These open pits are comprised of the Plutonic East, Perch and Salmon pits on the Plutonic Mine property, along with the Hermes and Hermes South open pits to the southwest.  The Company began the mining of the Plutonic East open pit in the second quarter as scheduled. The Company aims to utilize the production from these open pits plus the Main Pit push-back, along with operational improvements from the underground, to maximize the Plutonic Gold Operations’ ability to generate significant free cash flow.

During the second quarter of 2021, the Company provided an exploration update for the Baltic Gap mining front containing important high-grade drill results from its underground drill program as part of its strategy to expand into new mining fronts, improve mining grades and productivity, and reduce reliance on remnant mining.

The drill results released on June 23, 2021, showed continued growth of the new Baltic Gap mining front, which now extends over an interpreted strike length of 350 metres and up to 200 metres down dip, while remaining open along strike and at depth.  The new Baltic Gap mining front is also directly adjacent to existing underground infrastructure, thus requiring minimal capital to develop the area.  Results such as drill hole UDD24342, which intersected 14.8 g/t gold over 13.4 metres, give the Company further confidence in mining higher grades at Plutonic in the future.

Results to date support our view that the Baltic Gap is potentially an important new area of production at Plutonic.  The Baltic Gap results are now drilled at an average spacing of 20 metres, but are not yet included in our current Mineral Resource estimates.1

Scientific and technical information in this news release has been reviewed and approved by Keith Boyle, P.Eng., Chief Operating Officer of the Company, who is a “qualified person” as defined by NI 43-101. Mr. Boyle is not independent of the Company within the meaning of NI 43-101.