Superior Gold Inc. (TSX-V: SGI) is pleased to announce positive drill results from its new underground diamond drill program which commenced in December 2020 at its 100%-owned Plutonic Gold mine in Western Australia.

Results are provided for seven drill holes for a total of 1,372 metres of drilling.  Drilling during December 2020 and January 2021 was focused on the northwest of the Baltic zone which has yet to be fully drill tested.

Tamara Brown, Interim CEO of Superior Gold stated: “Today’s drill results are very promising.  We believe they demonstrate the continuation of a high-grade mineralized zone extending along the western front of the Plutonic orebody from the Indian zone, 350 metres down to the Baltic zone.  These intercepts are outside of existing Mineral Resources, but are within only 50 metres of existing infrastructure and can therefore be accessed with minimal capital.  Encouragingly, it is worth noting that all of the drill holes completed to target depth hit significant intercepts.

It is also important to note that these results support a new theory that mineralization at Plutonic is controlled by northwest trending faults, both at a macro and micro level, and specifically that these faults control where the concentration of high-grade gold is deposited. Drilling was completed over a strike length and vertical extent of approximately 100 metres by 200 metres, respectively. Mineralization remains open both up and down dip and along strike. These results continue to illustrate the prospectivity at Plutonic and highlight the potential to expand mineralization west of the Indian and Baltic zones and further extend the mine life.

The western extensions of the Indian and Baltic zones are key components of our current strategy to expand into new mining fronts, improve our mining grades and productivity, and reduce our reliance on remnant mining.  Although assays have been delayed due to backlogs at local laboratories, we look forward to releasing ongoing results from our revitalized exploration program throughout the course of 2021.”

Superior Gold’s mine exploration program is designed to target extensions of known high-grade mineralization, close to existing infrastructure but outside of existing Mineral Resources, in order to open new mining fronts and reduce reliance on remnant mining.  Although there exist significant historical high-grade intercepts across the large mineralized system, the Company is currently focused on expanding two key areas to open new mining fronts, being: 1) The Western Mining Front (along the Caspian, Indian and Baltic zones) and 2) The Baltic Gap as shown in Figure 4.

The Western Mining Front extends approximately 1.2 kilometres along the western edge of the Caspian, Indian and Baltic zones of the Plutonic underground mine and remains open, with several historic high-grade intercepts confirming mineralization continuity outside of Mineral Resources, as shown in Figure 4.

Drilling in 2020 identified significant high-grade mineralization in the northwest of the Indian zone, including 56.3 g/t gold over 15.1 metres (hole UDD22011) (refer to the News Release dated June 17, 2020).  The Company believes that today’s drill results demonstrate the northwest extension of these high-grade bands of mineralization 100 metres along the western extension of the Baltic zone (Figure 2). This opens an area approximately 100 metres by 200 metres of potential new high-grade, stacked lode mineralization. Multiple downhole intercepts confirm typical Plutonic mineralization, being a high-grade stacked lode system providing for more ounces per square metre in the area with all holes hitting significant intercepts. These results are in close proximity to existing infrastructure (i.e. within 50 metres) which translates to minimal capital expenditures required to infill drill and develop the area.

The Company has also recently completed a drilling program in the Baltic Gap (with assays expected within a quarter) and will shortly commence a drill program to follow up on previous intercepts along the Western Mining Front including in the Indian zone in the vicinity of hole UDD22011 which intersected 56.3 g/t gold over 15.1 metres, as previously indicated. 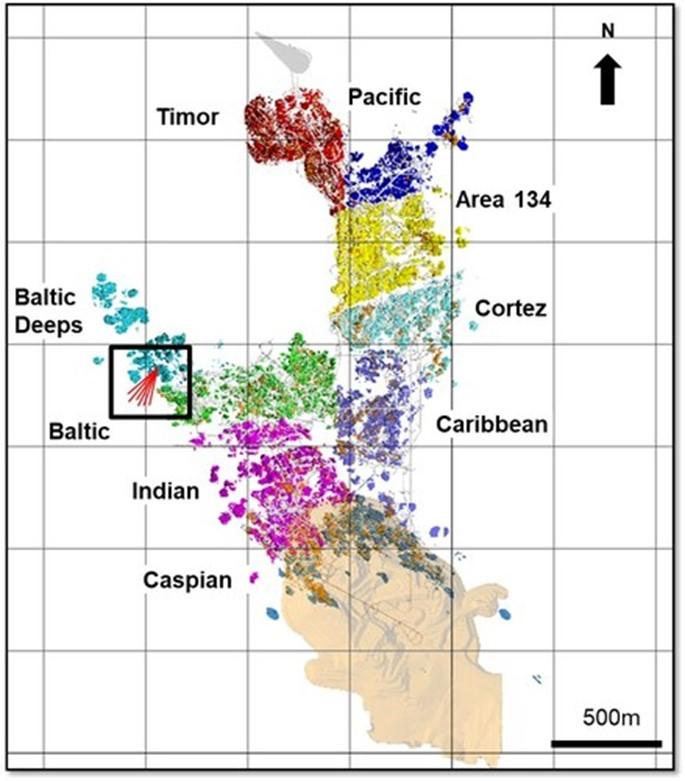 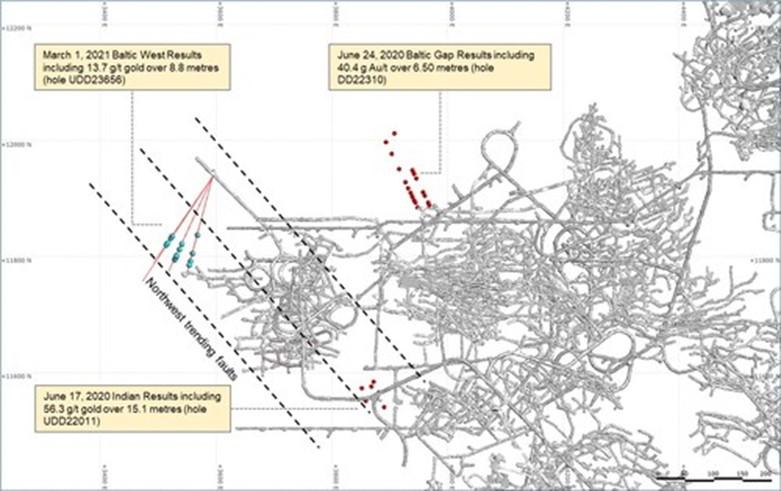 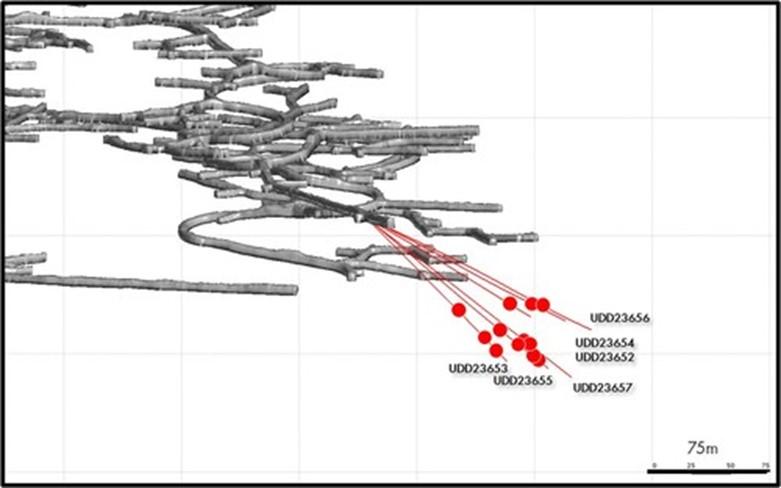