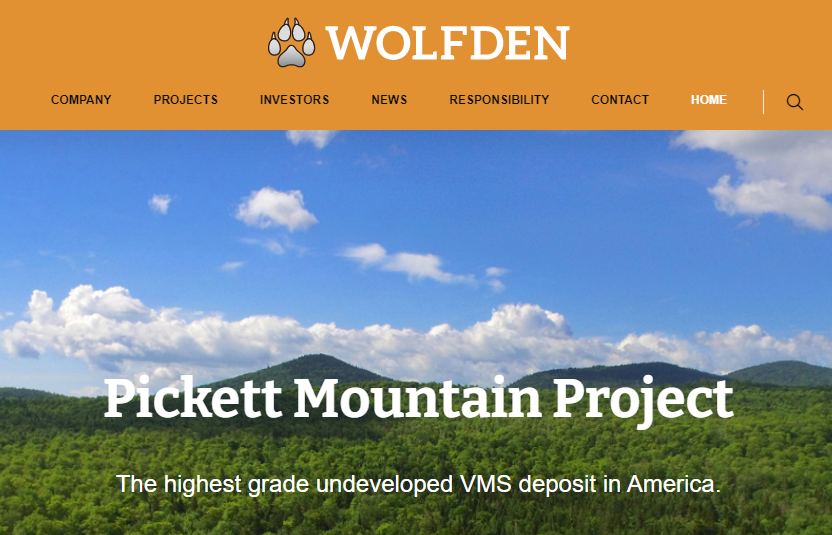 Wolfden Resources is an advanced stage Canadian exploration and development company where management has a significant track record of discoveries of gold and polymetallic deposits and being taken over because of it.  Wolfden’s Pickett Mountain VMS deposit is the highest grade undeveloped polymetallic massive sulphide deposits in the Americas. They have first mover advantage in Maine which had taken a 30-year hiatus in mining and exploration.

Wait, wasn’t there a company called Wolfden Resources over a decade ago that sold for nearly $400 million? Yes, the first Wolfden Resources sold for $363 cash (not stock) and this is the founder, same name, and an expanded team. This is Wolfden part 2! Like all the greats in this space they not only want to do it again but go bigger and closer to home.

The company has several properties that have strong value, but the team is focused decisively on their fully funded 5000m drill program on 12 targets on the 100% owned flagship property in Maine. Their high-grade Nickel sulphide properties in Manitoba are not overlooked and these form part of a back up plan to hold in the portfolio as they are strong candidates on their own merits. Rice Island and Nickel Island are promising projects that might see drilling in 2021, but the urgency now is in Maine.

The flagship property is the 100% owned Pickett Mountain Project in Maine, USA, close to infrastructure, and 75km from the Canadian border. What makes Maine attractive is that in 2017 they changed their mining laws to streamline the process: there are no native claims or rights in permitting, no expectation of any federal government involvement and no separate exploration drilling required for drilling, surveying, geophysics, line cutting as required in most States and Provinces. The projects ranks by analysts as the highest-grade undeveloped project in the America’s that has a chance of being developed in the next five years. There has been extensive work done and significant underpinned value that is higher than where the company is trading.  In addition, there is significant upside value if the company can expand the resources by only 50% at the same grade (20% ZnEq). If the team can extend the project with their fully funded program with12 targeted holes, then there is an immediate upside to this company.

High grade with less tonnage is a far better model, higher margin business then moving massive tonnes low grade. That and a lower capex. The Company has already launched in January 2020 the pre-permitting process to build an underground mine with processing and tailings facilities on site.

For those that love gold deposits, this would be equivalent to 1.5 million ounces at 11.5 grams per tonne.

What has people interested in this flagship property is not only the grade, the jurisdiction and management but the geology: Northern Maine Volcanic Belt, an Ordovician-age rift-related assemblage comprising part of the Gander Terrane in the eastern North American Appalachians. The geological formation of the Gander Terrane is well-endowed with numerous Zn-Pb-Cu-Ag massive sulphide deposits including 46 known deposits in the Bathurst Mining Camp in New Brunswick (next door) as well several in the Buchans mining district in Newfoundland. This is a large stretch of geology that reaches from Newfoundland, running through New Brunswick and Maine including the Pickett Mountain project and others. This means the upside potential in this largely underexplored area is high. The expectations and indications are solid and the blue-sky potential for this company ready to explore with over $3 million in the coffers. 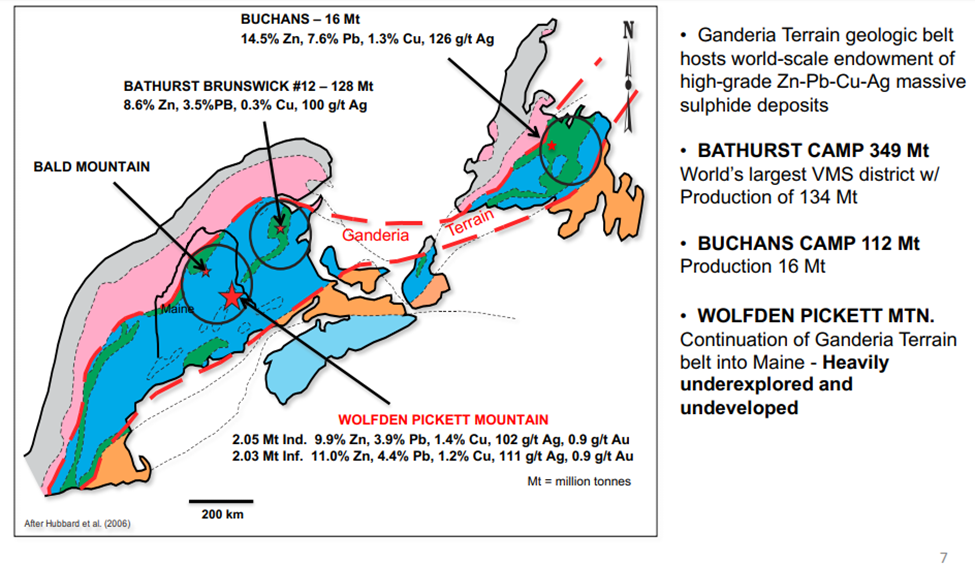 Not everyone likes to break base metal projects into gold equivalent, and I am not trying to make an exact correlation but simply highlighting another way of valuing the referred and indicated data embedded into this project. Almost 1.5 million ounces at roughly 11.4 grams per tonne.  Now that is a project that people understand. What does that mean if they can expand this resource?

A lot of value and perhaps that’s why Kinross is a significant shareholder.

A quick snapshot of management is key because we are talking about a few names that impress. Not only do they bring the wealth of experience and success but specific VMS expertise. This extremely short synopsis on the management is a big part of the article because it needs to be impressed upon. The team is picked for this project.

Ewan Downie has 25 years’ experience in the exploration and mining industry in North America and is currently President and CEO of Premier Gold Mines Limited. He founded the original Wolfden Resources Inc. and served as its President and CEO from 1995 to 2007, when it was acquired by Zinifex Limited for $363 million in cash. Mr. Downie for the team’s efforts, received the Prospectors and Developers Association of Canada 2003 Bill Dennis award.

President and CEO, Ron Little is an engineer, geologist and the founder and CEO of Orezone Resources and Orezone Gold Corp. for over 20 years and built one of the most successful exploration and mine development track records in Burkina Faso and was taken over by IAMGOLD in a deal worth $350 million in 2009.  Orezone Gold Corp was a spin-out of the deal and has gone on to develop another large gold mine in the country.

Ian Atkinson, Director was previously President and CEO, and a Director, of Centerra Gold before retiring in 2015. He has more than 40 years of experience in the mining industry with extensive background in exploration, project development and mergers and acquisitions. Prior to his ten-year tenure at Centerra, Mr. Atkinson held various senior leadership positions with Hecla Mining Company, Battle Mountain Gold, Hemlo Gold Mines, and the Noranda Group.

DON DUDEK, VP Exploration USA, has over 40 years of experience in various roles with junior to senior exploration and mining companies. Don has considerable experience and expertise in the exploration, discovery, and development of VMS deposits like Pickett Mountain.

Initially they confirmed the historic drill results and completed a maiden qualified resource in 2019. Second, completed geological surveys to help extend the Pickett Mountain lenses and other VMS deposits that may occur within this expanse belt. And finally started environmental studies as part of a future feasibility study and the mine permitting process.

One of the interesting and unique aspects to this team and project is that they were able to sell timber from their 6800-acre land parcel to keep operations without diluting shares. This may seem like a small thing but attention to detail while managing costs is key to exploration and effectively delivering results like that is encouraging. It shows a keen interest in delivering strong returns for each stockholder. On that topic, management owns 9% and two other key stakeholders are Altius and Kinross who own 21% of the company. This is a great indication of they type of corporate relationships the company has engaged.

This is just a snapshot of the opportunity that Wolfden offers:  A high grade first mover with expansion potential in a great jurisdiction. They have the right team with history in the region that understands the geology. A value that makes sense with huge blue-sky potential as the company explores more of the region. New targets and grow the resources is their focus. A market that is hungry for real projects that have the right people, a favorable jurisdiction and metals needed to build infrastructure, and drive the economy.

I am looking forward to speaking with the team next week but in the meantime there is some excellent work done by John Kaiser of Kaiser Research and John Tumasos of Very Independent Research.