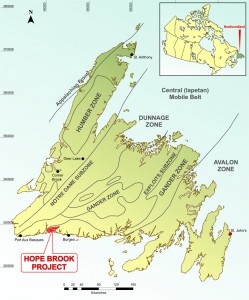 COASTAL GOLD CORP. (TSX-V:COD) (FRANKFURT:CY41) and Sulliden Mining Capital Inc.(TSX:SMC) have signed a definitive arrangement agreement dated March 2, 2015 pursuant to which Sulliden will acquire all of the issued and outstanding common shares of Coastal Gold by way of a plan of arrangement under the Business Corporations Act (Ontario).

participate in the upside of Hope Brook through their ownership of

Sulliden which is substantially undervalued in comparison to their net

Dr. Bill Pearson, President and CEO of Coastal Gold, commented, “We are very pleased with the Sulliden agreement, which will provide the necessary funding as well as access to strong corporate and engineering teams to move the Hope Brook Gold project forward. Coastal Gold shareholders are receiving fair value and will be able to participate in the upside of Hope Brook through their Sulliden shares. I look forward to working with the Sulliden team to advance Hope Brook and to realize the full exploration potential of this extensive but underexplored gold mineralized system.”

Peter Tagliamonte, P.Eng., Director and former Chairman of Sulliden Gold Corporation, commented, “This acquisition represents a great opportunity for the shareholders of both Sulliden and Coastal Gold. By leveraging the exploration success of Coastal Gold’s excellent geological team, and Sulliden’s strong technical and engineering team, we feel that the Hope Brook Gold Project can quickly be advanced to a production decision stage. Our intention will be to immediately advance the engineering side of the Hope Brook Gold Project.”

Justin Reid, President and CEO of Sulliden, commented, “For many months our team has been actively evaluating and visiting global mining projects. Hope Brook proved to be the most accretive for Sulliden. The project met all our criteria with its mining-friendly jurisdiction, its stage of development and the excellent mineral growth potential. With our financial resources and the focus of a proven team, we believe that the fast-track development of this project will generate tangible short and long term value for our shareholders.”

Pursuant to the terms of the Agreement, the Transaction will be conducted by way of a court-approved plan of arrangement under the Business Corporations Act (Ontario), resulting in Coastal becoming a wholly-owned subsidiary of Sulliden. Each Coastal Gold Common Share issued and outstanding immediately prior to closing of the Transaction will be exchanged for 0.05 of a Sulliden common share.

All options of Coastal outstanding immediately prior to closing of the Transaction will, following closing and subject to regulatory approval, be exercisable for that number of shares of Sulliden using the same exchange ratio applicable to the Coastal Gold Common Shares under the Transaction, with corresponding adjustment to the exercise prices on the basis of such exchange ratio.

On February 28, 2015, Sulliden and Coastal Gold entered into a loan agreement whereby Sulliden made available to Coastal Gold up to $150,000. The Loan will accrue interest at the rate of 10% per annum and mature on the earlier of the completion of the Transaction and the date that is six months following the termination of the Agreement. In the event of the termination of the Agreement, Coastal will be required to repay the Loan and all interest accrued on or before the Maturity Date. Pursuant to the terms of the Loan, Sulliden has the right at any time on or prior to the date on which the Loan is repaid to convert the outstanding principal amount of the Loan together with all accrued and unpaid interest thereon into Coastal Gold Common Shares at a price per common share equal to: (a) in the case of the principal amount, $0.05 per share; and (b) in the case of accrued and unpaid interest, subject to TSX Venture Exchange approval at the time of settlement, the Market Price of the Coastal Gold Common Shares.

The directors, senior officers and a principal shareholder of Coastal Gold have entered into support agreements pursuant to which they have agreed to vote in favor of the Transaction. Certain officers of Coastal Gold are contractually entitled to severance payments that could be triggered by the Transaction, however each such officer has waived in full his or her severance payments.

The Transaction is subject to customary conditions, including:

shareholders, as well as approval by a majority vote that will exclude

Special Transactions, the details of which will be contained in the

information circular to be provided to shareholders of Coastal Gold in

connection with the special meeting;

—  Approval/acceptance of the TSXV of the Transaction;

—  Coastal Gold shareholders holding collectively not more than five per

cent of the outstanding common shares of Coastal Gold having exercised

The Agreement includes a commitment by Coastal Gold not to solicit alternative transactions to the proposed Transaction. The Agreement provides that if Coastal Gold terminates the Transaction in certain circumstances it is obligated to pay to Sulliden $250,000 on account of costs and expenses in connection with the Transaction. Each party has also been provided with certain other rights, representations and warranties and covenants customary for a transaction of this nature, and Sulliden has the right to match any competing offers made to Coastal Gold.

Coastal shareholders will be granted dissent rights which, if exercised in accordance with applicable requirements, will provide such shareholders the right to be paid the fair value for their Coastal common shares by Coastal.

The terms of the Agreement will be described in detail in the management information circular of Coastal to be filed with the regulatory authorities and mailed to Coastal shareholders in accordance with applicable securities laws in respect of a special meeting of Coastal shareholders, currently scheduled to be held in April 2015. Subject to shareholder, court and regulatory approvals, the Transaction is expected to close by the end of April 2015.

Recommendation of Boards of Directors

Dr. Bill Pearson, P.Geo., President & CEO of Coastal Gold, a Qualified Person as defined by National Instrument 43-101 – Standards of Disclosure for Mineral Projects (“NI 43-101”), has reviewed and approved the scientific and technical content of this news release.

Sulliden Mining Capital Inc. is a Canadian reporting issuer incorporated under the Business Corporations Act (Ontario) and operates as a venture capital company focused on investments, acquisitions and the development of brownfield, development-stage and early production-stage mining projects in the Americas. The head and registered office of Sulliden is located at 65 Queen Street West, Suite 815, Toronto, Ontario M5H 2M5. For additional information please see Sulliden’s company profile which is available on SEDAR at www.sedar.com.