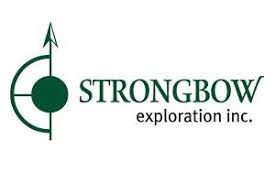 The United Downs project covers, or is located immediately adjacent to, four former copper and tin producing mines: Consolidated Mines and United Mines to the west; and, Mount Wellington and Wheal Jane Mines to the east (see map). The main mineralised structures in all four mines trend ENE and dip steeply to the north. All of the mineralisation exploited historically is related to either quartz veins or quartz-tourmaline veins hosted within “killas”, the local name for metasedimentary rocks that overlie granite intrusions.

GWDD-002 was drilled by Priority Drilling Company Ltd using an Epiroc Christensen CT20 Diamond Drill Rig. The part of the hole in which this intersection was encountered was drilled in PQ (122.6mm diameter) with a triple tube core barrel to recover an 83mm diameter drillcore. Core recovery was greater than 95%. The core was logged, split and sampled by Strongbow Exploration personnel. The samples, comprising quarter core, were sent for assay at ALS Minerals, Loughrea, Ireland. Sample preparation involved crushing to 70% less than 2mm, riffle split and pulverised to 85% less than 75 microns. The analytical method used was X-ray fluorescence (XRF) following a lithium borate fusion. Samples were assayed for As, Cu, Fe, Pb, S, Sn, W, and Zn. A comprehensive Quality Assurance / Quality Control programme using duplicates and blanks was included within the sampling programme.

The technical information in this news release has been compiled on behalf of Strongbow Exploration Inc. by Mr. Owen Mihalop. Mr. Mihalop has reviewed the data on behalf of Strongbow Exploration Inc. and takes responsibility for the data and geological interpretation. Mr. Owen Mihalop (MCSM, BSc (Hons), MSc, FGS, MIMMM, CEng) is Chief Operating Officer for Strongbow Exploration Inc. and has sufficient experience relevant to the style of mineralisation and type of deposit under consideration and to the activity which he is undertaking to qualify as a Competent Person as defined under the JORC Code (2012) and as a Qualified Person under NI 43-101. Mr. Mihalop consents to the inclusion in this announcement of the matters based on his information in the form and context in which it appears.