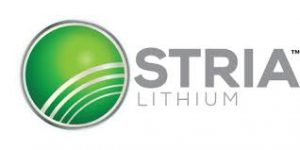 Mr. Gary Economo, President and CEO of Stria commented: “We are encouraged by the results from our first round of drilling at the Pontax Spodumene Pegmatite occurrence which confirms the pegmatite swarm extends over a minimum strike length of 500 m and to a minimum depth of 90 m with a potential thickening of the swarm to the northeast. Plans are underway for a second phase of infill and extension drilling to further test the continuity and grade of the spodumene bearing pegmatite swarm”.

1 True thicknesses are reported in this news release. The drill holes have been loaded into a 3-D visualisation software and the three-dimensional deposit envelope has an azimuth of N325 degrees and dips vertically. Drill holes crosscut the envelope of the mineralized zone at an angle of approximately 45 degrees. The conversion factor for true thickness is 0.7 of the core intersection length.

Drilling at the Pontax Lithium Property commenced on December 6, 2017, using a single heliportable drill rig operated by Forages Chibougamau Ltd of Chibougamau, Québec, and was completed on December 18, 2017. The drilling was designed to further test the continuity, thickness and grade of the spodumene bearing pegmatite swarm at depth and along strike at a 50 to 100 m spacing. Out of the eight BTW-diameter holes planned, seven were completed for a total of 911.4 m drilled.

A map showing the location of the drill holes and main mineralized intercepts is available on the Company’s Website at: http://strialithium.com/

The 2017 drilling program builds on the results of an earlier drilling and channel sampling program carried out by the previous owners of the Property in 2009 and 2012. Historic holes (total: 864 m) intersected a swarm of lithium bearing pegmatite dykes of an aggregated thickness of approximately 20 m, with the best intersection found in hole 09-555-05 (0.97% Li2O over 14.7 m reported as true thickness intervals (from 36.0 m to 57.0 m), including 1.43% Li2O over 9.1 m (from 36.0 m to 49.0 m)2. The average thickness of the Pontax spodumene-bearing pegmatite swarm is 60 m with the thickest zone lying along the northeast edge.

The fall 2017 exploration program at the Pontax Lithium Property was designed and operated by IOS Services Géoscientifiques Inc. of Chicoutimi, Québec, under the supervision of the Table Jamésienne de Concertation Minière (TJCM) of Chibougamau, Québec. All seven core holes were shipped from the field to IOS’s laboratory facilities in Saguenay, Québec in preparation for logging and sampling and for core sample preparation (crushing and grinding). In January 2018, IOS prepared 426 split core samples which were then submitted to Activation Laboratories Ltd. (Actlabs) of Ancaster, Ontario, an ISO/IEC 17025:2005 certified facility for multi-element analysis using ICP-OES spectral analysis after a sodium peroxide fusion (code 8-Peroxide). Quality control, monitored by an IOS chemist, consists of 15% reference materials including blank, duplicates and certified reference material for a total of 68 QA\QC analysis.

About the Pontax Lithium Property

In May, 2016, the Company reported that metallurgical testing of a 16.5 t bulk sample extracted from the Pontax Spodumene Pegmatite occurence achieved an initial assay result of 6.3% Li2O from spodumene concentrate with an 85% overall lithium recovery (refer to Stria news release dated May 24, 2016 available at http://strialithium.com/ or at www.sedar.com under Stria Lithium Inc.)

Stria is a Canadian junior mining exploration company with an expanding technology focus and is the sole owner of the Pontax Spodumene Lithium property in Northern Québec. Stria’s mission is to be a reliable, profitable global source for both lithium metal and lithium compound products and process technologies for producing value added lithium products.

Lithium is a critical metal in the universal fight against global warming. It is a core component of Lithium-Ion batteries used for powering electric vehicles and for industrial scale energy storage.

Mr. Réjean Girard, P.Geo., President of IOS Services Géoscientifiques Inc. and a Qualified Person under National Instrument 43-101 – Standards of Disclosure for Mineral Projects – has reviewed and approved the technical content of this news release.

Mr. Marc-André Bernier, M.Sc, P.Geo. (Québec and Ontario), TJCM Senior Geoscientist and a Qualified Person under National Instrument 43-101 – Standards of Disclosure for Mineral Projects, has reviewed and approved the non-technical content of this news release.