Strateco Shuts Down its Matoush Camp to Minimize Operating Costs

Strateco Shuts Down its Matoush Camp to Minimize Operating Costs 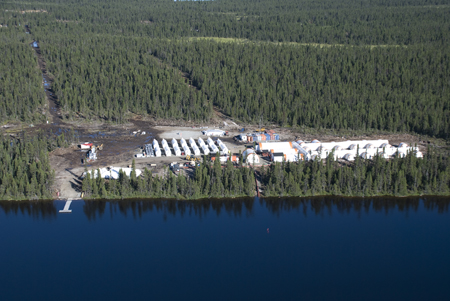 Strateco Resources Inc. (TSX:RSC) (FRANKFURT:RF9) announced today that it is shutting down its Matoush camp in the Otish Mountains, in northern Quebec. This decision is part of a cost cutting program that Strateco must adopt due to the Quebec government’s refusal to issue the final permit needed to start the advanced exploration phase of the Matoush project.
Strateco’s Matoush camp has been on standby for over a year, ever since a moratorium and commission of inquiry on Quebec’s uranium industry was announced on March 28, 2013.
The damages arising from the liquidation of the Matoush camp and any cost associated with reopening the camp in the future add to the damages incurred by Strateco and its shareholders following the Quebec government’s refusal to issue the certificate of authorization. Strateco has already finalized the sale of some of its facilities and equipment.
The Matoush camp will be closed in such a way as to protect the environment and human health, in keeping with the approach Strateco has taken since the start of the Matoush project in 2006.
Strateco’s cost cutting program is aimed, among other things, at preserving the recognized expertise of its team. Strateco will carry out exploration in Saskatchewan in the coming months through its subsidiary, SeqUr Exploration Inc.