Strateco Resources Inc.: The Minister Will No Longer Wait for the Conclusions of the BAPE Report on the Uranium Industry 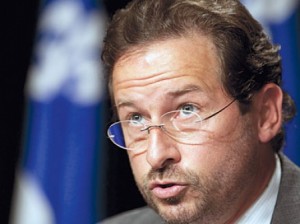 Quebec’s Minister of Sustainable Development, Environment, Wildlife and Parks, Yves-Francois Blanchet, has served Strateco (TSX:RSC)(FRANKFURT:RF9) with a notice indicating that he plans to “refuse to issue the permit for the Matoush underground exploration project” due to “a lack of sufficient social acceptability”.

The notice also grants Strateco 60 days to present its observations to the Minister regarding his intended refusal to issue the requested permit.

Strateco’s legal advisors are presently examining the impact and reach of this new development on the legal proceedings currently underway.

On March 28, 2013, two months after Strateco filed a petition for mandamus, the Minister announced that no permits would be issued for uranium exploration and mining projects in Quebec until the Bureau d’audiences publiques sur l’environnement had submitted its report on Quebec’s uranium industry.

The Minister specified at the time that the temporary moratorium, which could last for as long as 18 months or more, was applicable to Strateco.

Strateco reacted promptly to this illegal, abusive decision taken by the Minister on March 28, 2013, by asking the Superior Court to order the issuance of the permit.

In addition, on June 13 and 14, 2013, Strateco appeared before Superior Court to request the issuance of a safeguard order as of the end of June 2013, to assure the viability of the project until the proceeding scheduled for next fall can be heard.

Guy Hebert, President and CEO of Strateco, said that: “This is utterly incredible! While Quebec Superior Court has been deliberating since June 14 on representations made following the Minister’s decision to impose a temporary moratorium, the Minister now does an about-face and takes an entirely different decision by announcing that he now intends to refuse the permit required by Strateco. The facts as presented by the Minister in his notice entirely disregard his earlier decision. It is deplorable that the Minister is taking this stance after the end of the parliamentary session.”

Strateco has already obtained its federal authorisations and Canadian Nuclear Safety Commission permit for the Matoush advanced exploration program. Since the beginning of the Matoush project, Quebec’s Minister of Sustainable Development, Environment, Wildlife and Parks has issued 22 different permits to Strateco to advance the project, in which $123,000,000 has already been invested.