The six holes reported in this release (GC20-11 to GC20-16) are definition in-fill holes at approximately 50m intervals between previously wider-spaced drilling on approximate 200m sections. The location of the drill holes and assay results are presented below in Figure 1 and Table 1, respectively. All six holes intercepted gold-mineralized quartz vein and breccia structures yielding between 0.36 g/t Au over 12.1m in GC20-13 and 86.6 g/t Au over 0.6m in GC20-16 down-hole. Hole GC20-15 intercepted a high-grade interval of 10.2 g/t Au over 0.7m immediately in bedrock at 4.3m below the overburden surface.

Mr. R. Kim Tyler, President and CEO of the Company commented, “Though still at an early stage, these results continue to confirm multiple, parallel gold-bearing quartz vein and breccia structures constituted of higher-grade cores within lower-grade wall-rock halos. Results continue to yield significant gold values in all the known mineralized gold-bearing structures encountered to date. The abundance of high-grade surface samples collected in float-trains reported on November 17, 2020 that included 93 samples up to 320 g/t Au, averaging 13.27 g/t Au over 670m of strike across an 100m width, (Figure 1), overlie and are sourced proximal to this latest drilling area. We remain encouraged to definitively pin down that source. Our next objective is the compilation, interpretation and 3D modeling of all results to date to evaluate plunges, shoots or other criteria that may further control the higher-grade gold grade distribution in the larger system.”

He further added, “The Golden Culvert and near-by parallel 3 Aces high-grade gold occurrence, (5,401 g/t Au discovery in 2003), occur in a new evolving Hyland gold district in the eastern Yukon that has seen very little exploration activity as compared to the parallel White Gold District in the western Yukon. The Golden Culvert/3 Aces properties also lie in the prolific Tintina Gold Belt within rocks of similar geological terrane, age and deposit type that host the Cariboo gold District, (e.g., Barkerville), in eastern British Columbia and the Fairbanks Gold District, (e.g., Pogo), of eastern Alaska in a gap thousands of kilometres to the south and north respectively that, despite similar excellent prospectivity, have likewise seen very little comparative exploration activity.” 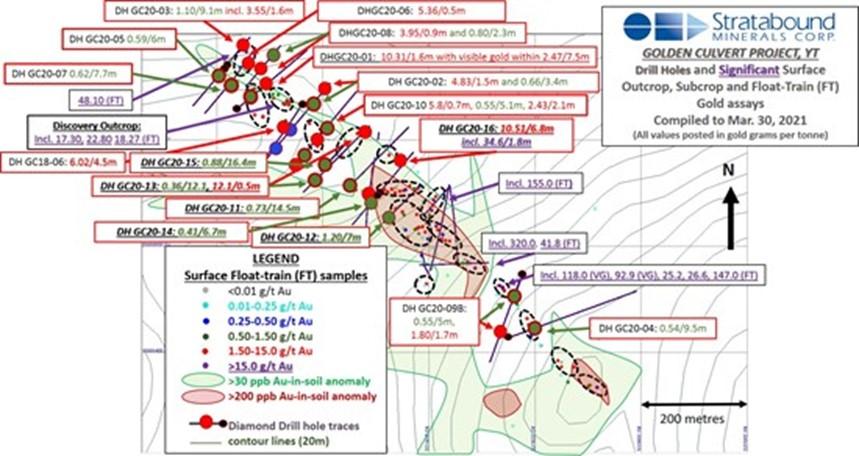 Table 1.
*(Intercepts are reported down-hole as true widths are unknown at this time.)

The samples referenced in this press release were collected and hand-delivered by Stratabound personnel to the ALS Canada laboratory in Whitehorse, YT where they were crushed to 70% less than 2mm. A riffle split of 250 grams was then taken and pulverized to an 85% passing 75 microns pulp sub-sample. The pulps were then shipped by ALS Canada to its Vancouver laboratory for gold and multi-element analyses. The ME-AA26 gold assaying procedure used is a standard fire assay with AA finish technique on a 50-gram sub-sample taken from the 250-gram pulp split. Samples that exceeded the 100 g/t Au upper detection limit of this method were re-assayed by the Au-GRA22 Ore Grade procedure, with a 50-gram pulp fire assay and gravimetric finish.

The samples were also tested for 51 other elements using the ME-MS41 Ultra Trace Aqua Regia ICP-MS method. ALS uses a procedure of standards, blanks and duplicates inserted into the sample stream for which all fell within satisfactory confidence limits. ALS is an independent internationally recognized and ISO/IEC 17025:2017 accredited chemical analysis company.

In addition to the quality assurance and quality control program performed by ALS, Stratabound personnel insert lab-certified standards and field blanks into the sample stream at the rate of one QA/QC sample for every 15 samples and maintain a program of duplicate sampling.

Mr. R. Kim Tyler, P.Geo., President and CEO of Stratabound, and a “Qualified Person” for the purpose of NI 43-101, has reviewed and approved the contents of this news release.