Mr. R. Kim Tyler, President and CEO of the Company commented, “The results of this first hole are consistent with past drilling and trenching results we have received to date and we are pleased to finally be able to report on them. It is an irony that the successful return of market interest and funding into the junior resource sector has created high demand and long delays in accredited assay labs. That being said, we anticipate receiving and reporting results on a timely basis going forward.”

These results for GC20-01 are the first of 17 holes drilled in the 2020 program including 6 holes testing the open-ended northern extension of gold mineralization and 3 holes testing the southern open-ended extension. Eight in-fill holes were also completed between previous drilling with the intent to conduct an initial NI 43-101 resource estimate anticipated later in 2021. 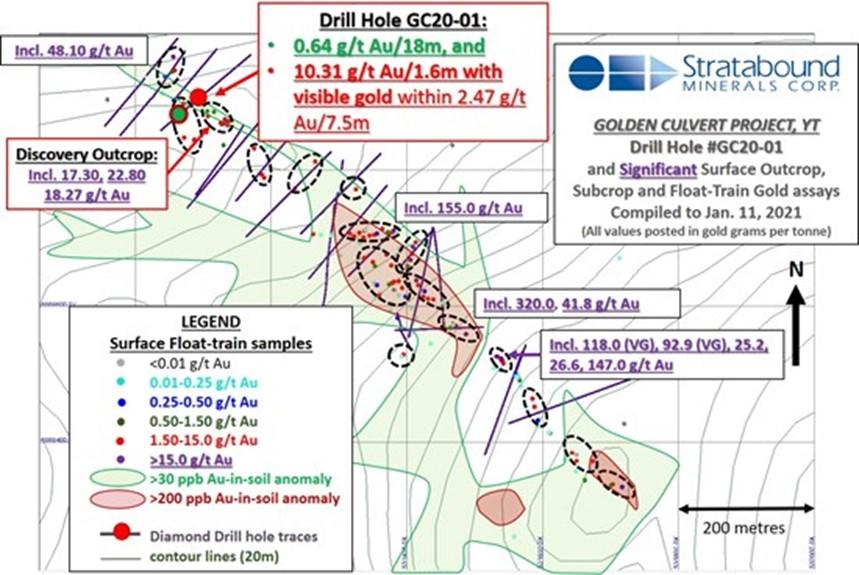 The samples referenced in this press release were collected and hand-delivered by Stratabound personnel to the ALS Canada laboratory in Whitehorse, YT where they were crushed to 70% less than 2mm. A riffle split of 250 grams was then taken and pulverized to an 85% passing 75 microns pulp sub-sample. The pulps were then shipped by ALS Canada to its Vancouver laboratory for gold and multi-element analyses. The ME-AA26 gold assaying procedure used is a standard fire assay with AA finish technique on a 50-gram sub-sample taken from the 250-gram pulp split. Samples that exceeded the 100 g/t Au upper detection limit of this method were re-assayed by the Au-GRA22 Ore Grade procedure, with a 50-gram pulp fire assay and gravimetric finish.

The samples were also tested for 51 other elements using the ME-MS41 Ultra Trace Aqua Regia ICP-MS method. ALS uses a procedure of standards, blanks and duplicates inserted into the sample stream results for which all fell within satisfactory confidence limits. ALS is an independent internationally recognized and ISO/IEC 17025:2017 accredited chemical analysis company.

In addition to the quality assurance and quality control program performed by ALS, Stratabound personnel insert lab certified standards and field blanks into the sample stream at the rate of one QA/QC sample for every 20 samples and maintain a program of duplicate sampling.

Mr. R. Kim Tyler, P.Geo., President and CEO of Stratabound, and a “Qualified Person” for the purpose of NI 43-101, has reviewed and approved the contents of this news release.