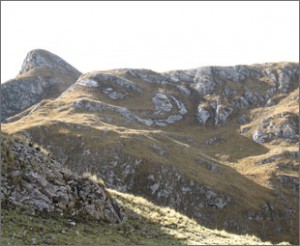 Strait Minerals Inc. (TSX VENTURE:SRD) is pleased to report that drilling has commenced at its 100% owned Alicia copper-gold project in southern Peru. Teck Peru S.A. a subsidiary of Teck Resources Limited can earn an initial 45% interest in the property by funding $4 million in exploration expenses.

“Alicia is a prime copper-gold porphyry target in a copper mining district that is quickly developing into one of the world’s richest,” said Strait President Jim Borland. “We had good success with our initial drilling to test skarns at Alicia; this will be the first drilling to methodically test the porphyry potential.”

Two track-mounted drill rigs capable of drilling to 1,000 metres are on the property. A nine-hole, 3,500-metre drill program has been laid out by Strait, which is managing the program, with holes planned on 200-metre sections. An environmental impact assessment for up to 23,000 metres of drilling has been approved by Peru’s Mines Ministry should results warrant further drilling.

“The major development projects in this area have resulted in significant improvements in local infrastructure,” said Mr. Borland. “Further improvements are expected as production from this district alone ramps up to an estimated 5% of world mined copper by 2016.”

Strait completed 15 drill holes at Alicia in early 2011 to test several outcropping skarn zones. All holes in that program intersected copper-gold mineralization. Along the northern contact of porphyry intrusives (referred to as the “Central Intrusive Complex”) with surrounding limestone, eight of those holes established a 600-metre strike length with seven of them intersecting copper mineralization of greater than 1%.

Furthermore, hole AL-02, drilled in 2003 by a previous owner, intersected porphyritic material in the Central Intrusive Complex with 100 metres grading 0.11% copper to a down-hole depth of 152 metres.

In 2012 a rock-chip sampling program was also conducted on a polymetallic zone approximately one kilometre south of the Central Intrusive Complex that has never been drilled. Highlights included 15.12% zinc, 989 g/t silver, greater than 30% lead, 3.27 g/t gold and 5.8% copper. This zone will not be tested in the current drill program.

Geophysical surveys further helped establish targets for the current drill program. In particular, an airborne radiometric survey shows a potassium-to-thorium ratio that is consistent with potassic alteration typical of porphyry deposits. The radiometric area of interest coincides with and extends beyond the area of anomalous rock and soil sampling. A ground magnetic survey and a ground induced polarization survey provided additional data.

“With Teck Peru funding exploration at Alicia and Teck recently exercising its warrants, we are in a good financial position pending completion of this drill program,” said Mr. Borland. In that regard, the Company has closed the second tranche of a non-brokered private placement by placing a further 100,000 working capital units for proceeds of $7,000. The proceeds from the offering will be used for general working capital. Securities issued under the second tranche of this private placement are subject to a hold period ending on February 10, 2014.

All of the Company’s exploration programs are prepared by, or prepared under the supervision of, Dr. Roger Moss, P.Geo., who serves as the Qualified Person as defined by NI 43-101 and is a director of the Company. Dr. Moss has reviewed and approved the technical content of this news release.

Strait Minerals Inc. is a Canadian mineral exploration company active solely in Peru since 2003 and listed on the TSX Venture Exchange. It holds a 100% interest in the Alicia copper-gold property which lies within the Andahuaylas-Yauri copper belt approximately 500 km southeast of Lima. Strait has granted Teck Peru S.A., a wholly owned subsidiary of Teck Resources Limited, an option to earn up to a 75% interest in the property by, among other things, spending $30 million on exploration or by spending $10 million on exploration and delivering a pre-feasibility study. The Company also holds an option to earn a 100% interest in the Caribe copper-molybdenum property approximately 80 km west of Alicia and holds a 100% interest in both the Letra Rumi South base metals property and the Culebrilla precious metals property approximately 250 km north of Lima. The Company continuously reviews exploration opportunities in Peru and is actively seeking additional projects.