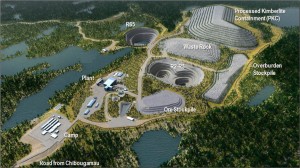 The Renard Diamond Project is located approximately 250 km north of the Cree community of Mistissini and 350 km north of Chibougamau in the James Bay region of north-central Quebec. In November 2011, Stornoway released the results of a Feasibility Study at Renard, followed by an Optimization Study in January 2013, which highlighted the potential of the project to become a significant producer of high value rough diamonds over a long mine life. Probable Mineral Reserves as defined under National Instrument (“NI”) 43-101 stand at 17.9 million carats, with a further 17.5 million carats classified as Inferred Mineral Resources, and 23.5 to 48.5 million carats classified as non-resource exploration upside. All kimberlites remain open at depth. Pre-production capital cost stands at an estimated C$752 million, with a life of mine operating cost of C$57.63/tonne giving a 67% operating margin over an initial 11 year mine life. Readers are referred to the technical report dated December 29th, 2011 in respect of the November 2011 Feasibility Study for the Renard Diamond Project, and the technical report dated February 28th, 2013 in respect of the January 2013 Optimization Study, for further details and assumptions relating to the project.