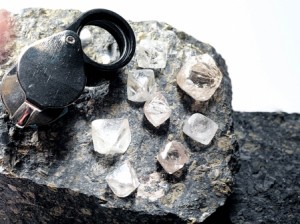 Stornoway Diamond Corporation (TSX:SWY) is pleased to announce that it has closed its previously announced financing transactions with Orion Mine Finance, Diaquem Inc. and Ressources Quebec and the Caisse de depot et placement du Quebec. The Financing Transactions are intended to provide a comprehensive funding package for the construction of the Renard Diamond Project. In total C$946 million(1) has been funded, or committed for funding, through a combination of senior and subordinated debt facilities, equity issuances, an equipment financing facility with Caterpillar Financial, and the forward sale of diamonds. Taken together, these transactions represent the largest ever project financing package for a publicly listed diamond company.

Concurrent with the closing announced today, approximately C$464 million1 in aggregate gross proceeds from the public and private offerings of subscription receipts and the private offering of convertible debentures has been released to the Corporation (subject to the payment of certain transaction costs) to allow the immediate commencement of project construction. The proceeds of the senior secured loan, the purchase and sale agreement for the forward sale of diamonds, the equipment financing facility and the cost overrun facility (if and when needed) will be made available to Stornoway in due course in accordance with their terms.

Stornoway was advised on the Financing Transactions by its financial advisors, Scotiabank and Dundee Capital Markets, and by its legal advisors, Norton Rose Fulbright.

The Renard Diamond Project is located approximately 250 km north of the Cree community of Mistissini and 350 km north of Chibougamau in the James Bay region of north-central Quebec. In November 2011, Stornoway released the results of a Feasibility Study at Renard, followed by an Optimization Study in January 2013, which highlighted the potential of the project to become a significant producer of high value rough diamonds over a long mine life. Probable Mineral Reserves, as defined in National Instrument 43-101 – Standards of Disclosure for Mineral Projects (“NI 43-101”), stand at 17.9 million carats. Total Indicated Mineral Resources, inclusive of the Mineral Reserve, stand at 27.1 million carats, with a further 16.85 million carats classified as Inferred Mineral Resources, and 25.7 to 47.8 million carats classified as non-resource exploration upside. Readers are cautioned that the potential quality and grade of any target for further exploration is conceptual in nature, there has been insufficient exploration to define a Mineral Resource and it is uncertain if further exploration will result in the target being delineated as a Mineral Resource. All kimberlites remain open at depth. Readers are referred to the technical report dated December 29th, 2011 in respect of the November 2011 Feasibility Study for the Renard Diamond Project, and the technical report dated February 28th, 2013 in respect of the January 2013 Optimization Study, for further details and assumptions relating to the project. Disclosure of a scientific or technical nature in this press release was prepared under the supervision of Robin Hopkins, P.Geol. (NT/NU), Vice President, Exploration, a “qualified person” under NI 43-101.