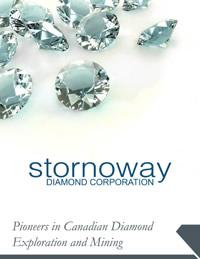 Stornoway Diamond Corporation (TSX:SWY) is pleased to announce that it has closed its previously announced public offering of 188,600,000 subscription receipts at a price of C$0.70 per Subscription Receipt for aggregate gross proceeds of C$132.02m. The subscription receipts are expected to begin trading on Friday May 23rd, under the ticker symbol TSX-SWY.R.

Matt Manson, Stornoway’s President and CEO, commented: “The successful closing of the public offering of subscription receipts is an important milestone for Stornoway, and a precondition for the completion of the overall project financing agreement announced on April 9th. This agreement contemplates financing commitments to fully fund the Renard Diamond Project through construction to the declaration of commercial production, including all contingencies, capital escalation allowances, working capital requirements, and financing costs. We look forward to submitting the balanced package of equity, debt and streaming agreement that we have arranged to our shareholders for their approval at a special meeting to be held in Montreal on June 26, 2014. Principal project construction is expected to commence upon the receipt of shareholder approval and the satisfaction of all remaining transaction conditions, including the completion of definitive documentation.”

The Public Offering and the Private Placements were made pursuant to the previously-disclosed binding financing commitment agreement, as amended among the Corporation, Orion Co-Investments I Ltd., RQ and CDPQ for the construction of the Renard Diamond Project.

This press release shall not constitute an offer to sell or a solicitation of an offer to buy, nor shall there be any sale of any securities referred to in this press release in any jurisdiction in which such an offer, solicitation or sale would be unlawful prior to the registration or qualification under the securities laws of any such jurisdiction. Without limiting the foregoing, the securities referenced herein have not been and will not be registered under the U.S. Securities Act of 1933, as amended, and may not be offered or sold in the United States absent registration in the United States or an applicable exemption from registration requirements. The securities being offered have not been approved or disapproved by any regulatory authority, nor has any such authority passed upon the accuracy or adequacy of the final short form prospectus.

The Renard Diamond Project is located approximately 250 km north of the Cree community of Mistissini and 350 km north of Chibougamau in the James Bay region of north-central Quebec. In November 2011, Stornoway released the results of a Feasibility Study at Renard, followed by an Optimization Study in January 2013, which highlighted the potential of the project to become a significant producer of high value rough diamonds over a long mine life. Probable Mineral Reserves, as defined in National Instrument 43-101 – Standards of Disclosure for Mineral Projects (“NI 43-101”), stand at 17.9 million carats. Total Indicated Mineral Resources, inclusive of the Mineral Reserve, stand at 27.1 million carats, with a further 16.85 million carats classified as Inferred Mineral Resources, and 25.7 to 47.8 million carats classified as non-resource exploration upside. Readers are cautioned that the potential quality and grade of any target for further exploration is conceptual in nature, there has been insufficient exploration to define a Mineral Resource and it is uncertain if further exploration will result in the target being delineated as a Mineral Resource. All kimberlites remain open at depth. Readers are referred to the technical report dated December 29th, 2011 in respect of the November 2011 Feasibility Study for the Renard Diamond Project, and the technical report dated February 28th, 2013 in respect of the January 2013 Optimization Study, for further details and assumptions relating to the project. Disclosure of a scientific or technical nature in this press release was prepared under the supervision of Robin Hopkins, P.Geol. (NT/NU), Vice President, Exploration, a “qualified person” under NI 43-101.