Starcore Production Increases to 5,126 Ounces of Gold in 3rd Quarter

Starcore Production Increases to 5,126 Ounces of Gold in 3rd Quarter 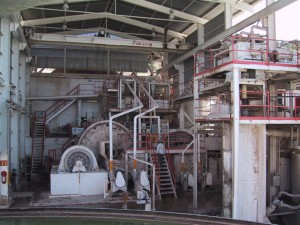 Starcore International Mines Ltd. (TSX:SAM) announces production results for the third quarter of the fiscal year ending April 30, 2013, at its San Martin Mine in Queretaro, Mexico.

Mill recoveries remained constant from last quarter and averaged 79.25% for gold and 55.6% for silver during Q3. Silver grades are improving; however, the contribution to equivalent ounces of gold is reduced due to the rising gold-to-silver ratio.

Historically, Q3 is a difficult production period because of the lowest number of operating days of any quarter and the occurrence of important holidays in Mexico that generally require the milling of surface stockpiles. The creation of these stockpiles results in minimizing overtime payments.

“Production results in the third quarter of fiscal 2012-2013 show that the operation has stabilized and that we are exceeding our production targets. We continue to see positive cash flows from mine operations every month despite the recent drop in the price of gold,” said Robert Eadie, President & CEO of the Company.