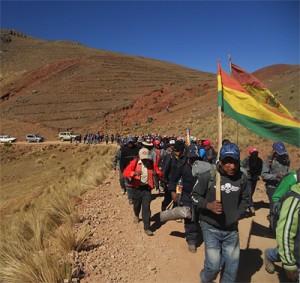 South American Silver Corp. (TSX:SAC)(OTCQX:SOHAF) announced today that its wholly-owned subsidiary, South American Silver Limited, has commenced international arbitration proceedings against the government of Bolivia under the Arbitration Rules of the United Nations Commission on International Trade Law  pursuant to the Agreement between the Government of the United Kingdom and the Government of Bolivia for the Promotion and Protection of Investments.

The arbitration has been commenced as a result of acts and omissions of the Government including the issuance of Supreme Decree No.1308 on August 1, 2012. The Decree revoked mining concessions covering the Malku Khota Mining Project held by Compania Minera Malku Khota S.A. a wholly-owned subsidiary of South American Silver Limited. These measures resulted in the complete expropriation of the Project without compensation. The arbitration claim is for Bolivia’s breach of the Treaty and international law. Bolivia has breached the Treaty’s requirement to provide full protection and security to foreign investors and their investments, as well as the Treaty’s protections against, among other things, expropriation without just and effective compensation, unfair and inequitable treatment, and less favorable treatment than afforded to Bolivian nationals or nationals of third states.

Since the Decree, the company has made numerous attempts to open a dialogue with the Government with the aim of reaching an amicable resolution of the dispute, including receiving fair-value compensation. In late February 2013, the company was invited to attend a meeting set for 17th April, 2013 in La Paz, Bolivia. Attorneys representing South American Silver attended the April meeting but no resolution was reached and no compensation offered. The Decree stated clearly that the Bolivian state mining company, Corporacion Minera de Bolivia, would hire an independent firm to carry out a valuation of the investments made by CMMK within a period not to exceed one hundred and twenty business days. However, no such valuation has been carried out, nor has an ndependent firm been hired to undertake the valuation.

Exploration commenced at Malku Khota in 2003 and work on the Project continued through the expropriation in August 2012. After completing a total of 42,700 meters of drilling in 121 diamond core holes, and undertaking metallurgical testwork, process development and engineering design, a Preliminary Economic Assessment Update was filed on SEDAR on 13th May, 2011 in a NI 43-101 technical report. The May 2011 PEA Update included economic modeling that indicated pre-tax net present value at a 5% discount rate of:

After the 2011 PEA Update, the pre-feasibility study phase was started in June 2011. The ongoing work program, which was designed to expand mineral resources and enhance project economics, included the development of social and community programs to benefit indigenous communities, baseline studies for the environmental review and assessment program, exploration, metallurgical testwork, flowsheet development, engineering design and preparations to construct a modern 150 person exploration camp near the exploration site. The planned work programs including the PFS were not completed due to the expropriation.

Phillip Brodie-Hall, President and CEO of South American Silver said, “It is regrettable that we are forced to resort to international arbitration to resolve this matter. Bolivia chose to expropriate our mining concessions; it must now meet its legal obligations and compensate us for this significant loss. International arbitration gives us the means to pursue our case and we are very confident that it will deliver fair value compensation. We have a first-class team working on the case and, while we are open to dialogue with the Government, we are prepared to go the full distance in arbitration if that’s what it will take to get fair value compensation. Our loyal shareholders deserve nothing less.”

Bolivia has been involved in over fifteen “nationalizations”, the majority of which have taken place after President Morales came to office. A number of the cases have reached negotiated settlements and at least five others are pending. Bolivia’s reserves of cash and gold were estimated at $13.62 billion as of December 31, 2012, up from US$3 billion when Morales came to office in 2006. Bolivia’s credit rating was upgraded by all three major rating agencies in 2012, the most recent being Fitch Ratings upgrade from B+ to BB- in October 2012. Bolivia has demonstrated that it has ready access to international funding, having had a $500 million 10-year bond offering significantly oversubscribed in August 2012 at an interest rate of only 4.875%. The IMF recently forecast that Bolivia will be one of the fastest growing economies in South America with an expected GDP growth rate in 2013 of 4.8%.

Mr. Brodie-Hall went on to say, “It is not a question of whether Bolivia is capable of meeting its obligation to compensate the company for the expropriation; it clearly has the financial capacity.”

South American Silver Corp. is a growth focused mineral exploration company creating value through the exploration and development of the large scale Escalones copper-gold project in Chile, the realization of value from the Malku Khota project in Bolivia and the pursuit of new opportunities. South American Silver Limited is a company incorporated in the Bermuda Islands, an overseas territory of the United Kingdom, which through its wholly owned Bahaman subsidiaries: Malku Khota Ltd, G.M. Campana Ltd. and Productora Limited., owns one hundred per cent of the outstanding shares of Compania Minera Malku Khota S.A., a Bolivian company, holder of the Malku-Khota mining concessions until their nationalization by the Bolivian Government. The Company’s approach to business combines the team’s track record of discovery and advancement of large projects, key operational and process expertise, and a focus on community relations and sustainable development. Management has extensive experience in the global exploration and mining industry.