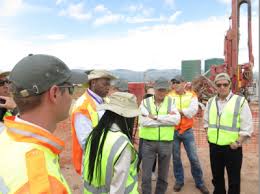 The Department of Mineral Resources and Ivanhoe Mines (TSX:IVN) jointly announced today that the mining right for the development and operation of the company’s Platreef mining project now has been finalized.

The mining right, or licence, authorizes Ivanhoe to mine and process platinum-group metals, nickel, copper, gold, silver, cobalt, iron, vanadium and chrome at its Platreef discovery, near Mokopane on the Northern Limb of the Bushveld Complex. The mining right was issued for an initial period of 30 years and may be renewed for further periods, each of which may not exceed 30 years at a time, in accordance with the terms of section 24 of the Mineral and Petroleum Resources Development Act.

The DMR notified Ivanhoe Mines yesterday that the mining right had received the required notarial execution, dated November 4, signifying formal activation of the right. While the DMR originally granted Ivanhoe Mines its Platreef mining right on May 30, formal activation of the right remained subject to the satisfaction of a number of conditions intended to ensure that the mining operation can meaningfully contribute toward the socio-economic development of the area in an environmentally sustainable manner.

Minister Ramatlhodi said the final approval of the Platreef mining right was indicative of the DMR’s drive to ensure compliance with South Africa’s mining regulatory framework while simultaneously attracting investment and growing the economy.

“The final regulatory approval of the Platreef Project’s mining right is significant not only for the development of the project itself but it also signals the South African government’s determination to grow our country’s economy. The Platreef Project will attract foreign capital, create much needed jobs and contribute significantly to socio-economic development in areas surrounding the project,” said Minister Ramatlhodi.

“Whilst welcoming investment into the South African mining industry, the Department of Mineral Resources continues to focus on compliance with South Africa’s mining laws and to this end we are pleased that the Platreef Project will indeed satisfy the environmental, socio-economic as well as Black Economic Empowerment requirements as set out in the law. We look forward to a constructive partnership on this project between Ivanhoe Mines, the South African government, communities and workers.”

Mr. Friedland said that the execution of the mining right will enable the immediate resumption of preparations for continued construction at the Platreef site.

“With the shared, ongoing commitments of the Department of Mineral Resources, our Broad-Based, Black Economic Empowerment partners and our supportive co-investors from the Japanese trade and industry consortium, Ivanhoe Mines’ Platreef Project is going to become a sustaining foundation of jobs and support serving the common interests of our host communities in Limpopo province,” Mr. Friedland said.

“After all of the discussions that have been held with stakeholders about these very significant benefits that will flow from the development and operation of the planned mine, we are about to begin seeing our words translated into meaningful actions,” Dr. Makhesha added.

Following yesterday’s execution of the mining right, Ivanplats will take immediate steps to terminate a consultation process with its Platreef workforce that the company launched earlier this month under provisions of the Labour Relations Act as a prelude to possible retrenchments at the idled Platreef site. Site work has been suspended since May 26 pending finalization of the mining right.

Ivanhoe Mines is planning a multi-phased mine development on its Platreef discovery on the Northern Limb of the Bushveld Complex.

Ivanhoe Mines is evaluating other opportunities as part of its objective to become a broadly based, international mining company.