Soma has built a new 3D model integrating channel samples, mapping and mining data for this under-explored mineralized trend on its Zara project. This work has identified three new zones for follow-up exploration and drilling with the potential for high gold grades (see map #1). The first phase of drilling in the Alacran-Diamantina zone and extensive vein channel sampling at the Diamantina mine have confirmed the presence of high gold grades to depth.

This zone is located 2 km to the south west of the Company’s past producing, high-grade Limon mine and is at the southern end of the larger 7-km Estrella-Diamantina mineralized trend. The presence of historic small miners provided access to underground workings that allowed the company to confirm reported high grades.  Soma is planning 3,500m of drilling to test the down-dip continuity of the main mineralized zone that was mined in the past by local miners (see cross-section #1). The current drilling program commenced in early February 2021. The first three drill holes, totaling 847m, the results of which are reported in this press release, represent approximately 25% of the planned program and were completed by the end of March. The remaining drilling will be completed by the end of June 2021.

* Widths reported are drilled core lengths. Drill holes were oriented to be perpendicular to the dip of the veins, and management believes the reported intersections approximate their true widths.

In addition to the drilling, channel sampling at the Diamantina mine was completed in level one and in three incline raises (see table # 1). Forty two (42)  channel samples were collected by hand, using hammer and chisel, perpendicular to the exposed mineralized quartz-carbonate vein to best represent true width. The channel samples results corroborate the presence of the high grades previously reported. The high grades and vein continuity remain open along strike and down-dip.

* Lengths are sampled intervals lengths and not necessarily true widths. Samples were taken in a manner to reflect, as closely as possible, true width.

North to South cross-section #1 showing the under explored Alacran-Diamantina mineralized trend and vein interception of drill holes ADDDH_21_01 to ADDDH_21_03. Planned drill holes are expected to be completed by the end of Q2. 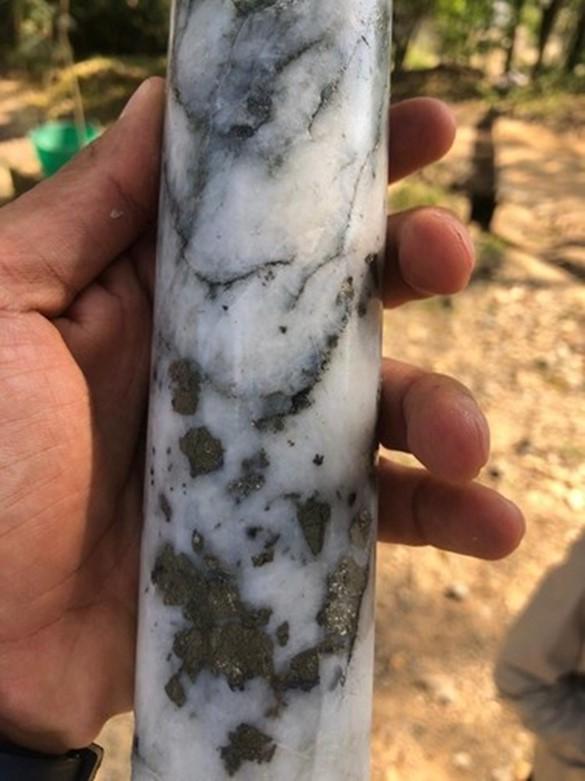 Javier Cordova, Soma’s CEO, states, “The results of the current program supports the Company’s assumptions on the continuity of the mineralized trend and bodes well for the establishment of a larger resource as the exploration program moves south. The Company’s existing mines are located at the northern end of the claims blocks. The current program is leveraging the work, at the surface and near the surface, completed by small miners in the region to map the mineralized veins and pinpoint the locations of the highest grade material. This mapping and sampling will focus on the planned four-year, 100,000-meter DDH drilling program. We have only begun to understand the extent, grade and depth of the mineralized zone on the northern section of the Otu Valley. Mapping of the veins exposed by the small miners indicates that the mineralized trend continues south for 13 km on Soma’s property.”

For exploration core drilling, the company applied its standard protocols for sampling and assay. NQ core is sawn or split with one-half shipped to a sample preparation laboratory in Medellin run by ALS Colombia Limited. Channel samples were collected by hand using hammer and chisel perpendicularly across exposed mineralized quartz-carbonate vein to best represent the true width. Channel sample locations were surveyed using total station. Each sample location has been photographed with channel traces painted to indicate the location and orientation of each sample. Samples are then shipped for analysis to an ALS-certified assay laboratory in Toronto, Canada and Lima, Perú. The samples were analyzed for gold using standard fire-assay on a 50-gram sample with an AA finish. Multi-element geochemistry was determined by ICP-MS using either aqua regia (ME-MS41) or four acid (ME-MS61) digestions. Blanks, duplicates and certified reference standards are inserted into the sample stream to monitor laboratory performance. Comparison to control samples and their standard deviations indicates acceptable accuracy of the assays and no detectible contamination. The remainder of the core is stored in a secured storage facility for future assay verification.

Mr. Edwin Naranjo Sierra, FAusIMM, MSc, Senior geologist, Director of Exploration for Soma Gold Corp is the Qualified Person, within the meaning of NI 43-101. Mr. Naranjo is satisfied that the analytical procedures and best practices used are standard industry methodologies, and he has reviewed and approved the technical information disclosed in this news release.

Soma Gold Corp. is a mining company focused on gold production and exploration. The Company owns two adjacent mining properties in Antioquia, Colombia with a combined milling capacity of 675 tpd. (permitted for 1,400 tpd). The El Bagre Mill is currently operating and producing. Internally generated funds are being used to finance a regional exploration program.